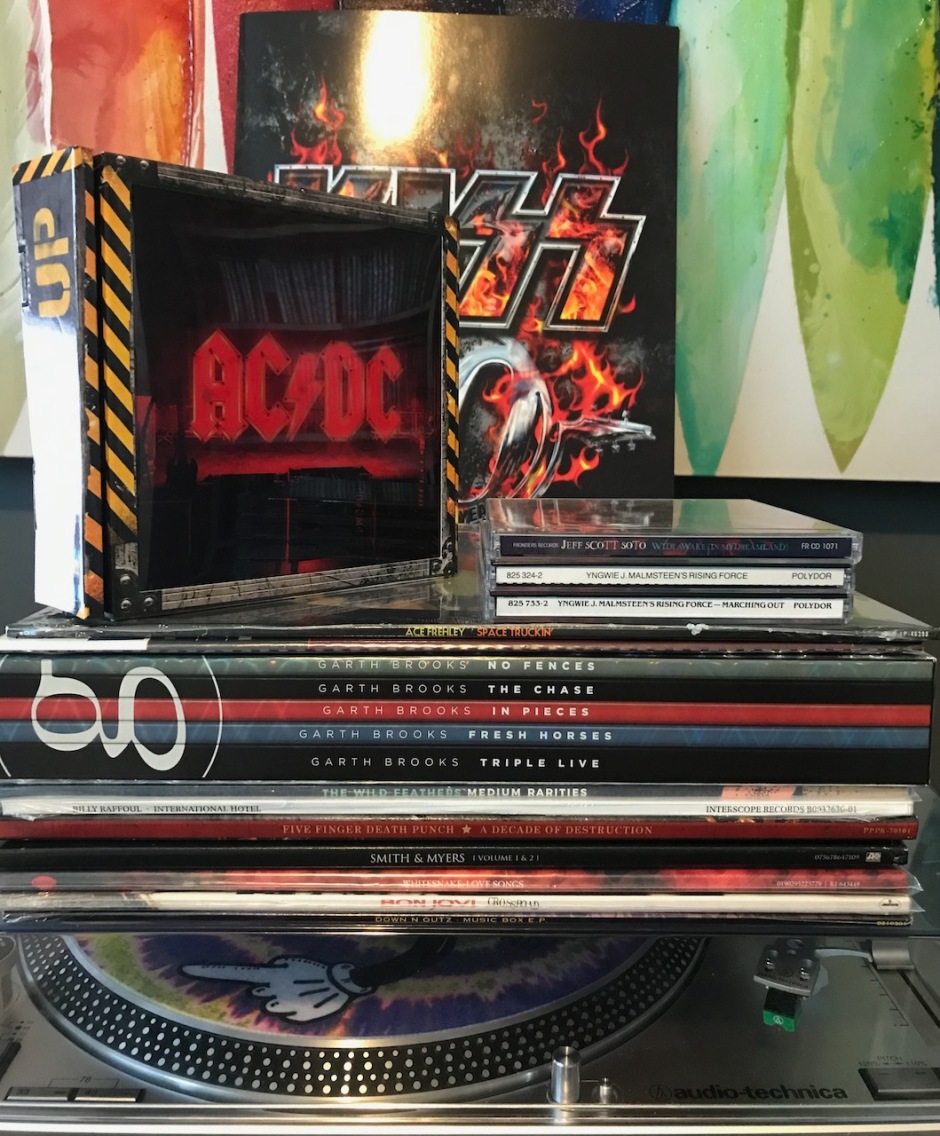 October wasn’t even over before I bought more records, however, the October Purchase post was already done and I wasn’t about to go back and update, too much work. I wrote the post on the October Record Store Day and there was one album I didn’t get that I wanted (well there were two, but I didn’t get the second one). I did get it through another local record store. And when I went and picked it up on that Sunday, I saw another record I didn’t have that was in the new arrival used bin and it was sealed and less than $20 so I bought it.

The RSD record was from the Joe Elliott band Down ‘N Outz…I love the cover with the eerie clown and it almost looks 3D at this angle.

END_OF_DOCUMENT_TOKEN_TO_BE_REPLACED

Welcome to the June Purchases wrap-up and what a month it was.  After not visiting an actual record store in 2 months due to the Covid Stay at Home Orders, I was out in force when the opened back up.  And this time it wasn’t just vinyl and CDs, there were a couple other surprises that were music related.  And then there were a stack of albums I picked up that I didn’t have to buy which is always cool.  Let’s get started.

First up was my trip to Repo Records and Noble Records as they were two of the first to open. I wanted to spend a little at both to show my support and I did just that.  First up was Repo. I was worried we would have to wear masks and gloves, but thankfully neither store required but we could if we wanted to do it.  Which I didn’t because we left the masks at home on the counter.  I didn’t really find anything at Repo’s until I stumbled across a brand new copy of Tesla’s Psychotic Supper.  It was new and sealed so no real deal on it, but it was cheaper than what Amazon was offering and since it is on a list of albums I want, I got it.

END_OF_DOCUMENT_TOKEN_TO_BE_REPLACED

What a crazy month March has been and thank good it is almost over.  If you are still home cooped up from this whole virus thing, then here are some new releases you can get to help pass the time as I am sure you will need it.  Some good stuff for me this week, but don’t know about you.  Hopefully and if so, let me know what you want to hear, buy or don’t care about.  Also, let me know what I might have missed that people should know about.  My choices are in blue.  Enjoy and have a great weekend!

END_OF_DOCUMENT_TOKEN_TO_BE_REPLACED

Tesla decided to make a new album after saying the last one was…well the last one.  Thankfully, that is not the case.  Tesla’s new album is called ‘Shock’ and there has been a lot said of this new album and about how much it sounds like Def Leppard since it was produced by Phil Collen, lead guitarist of the band.

And let me tell you, they are 100% RIGHT!!  It really does!!  Mostly, it is from the backing vocals.  On a lot of the songs, the backing vocals have been done in the same way Lep does it.  In fact, all the backing singers sound exactly like Phil. Now, I am not saying sounding like Lep is a bad thing.  It is, however, a little distracting and a little detracting.

From the opening track, “You Won’t Take Me Alive”, “Taste Like”, “I Want Everything” and “Afterlife” it is the classic Lep sound.  They aren’t bad songs at all and they do grow on you with each listen.  It is just strange.  At times I feel like I am listening to a Lep album with a new lead singer.

The album is also very soft at time.  It has several ballads (“We Can Rule The World”, “Love is a Fire” and “Forever Loving You”) and even a breezy little song called “California Love Song”.  At times you could compare this album to Def Leppard’s X (often called the “Love” album for it’s ballad heavy track list).

END_OF_DOCUMENT_TOKEN_TO_BE_REPLACED

Finally!!  A fantastic week of releases.  There have  been some okay weeks, but this one has the most so far that I am interested in this year.  So, I am not going to ramble on and on…my choices are highlighted in Blue.  Let me know what you are interested in hearing or anything I might have missed.  Happy Friday!!

END_OF_DOCUMENT_TOKEN_TO_BE_REPLACED

2019 is upon us and it is always fun anticipating what new albums are and will come out in the year.  There are quite a few we already know about, but some haven’t been officially announced or even a date set yet.  From what I have gathered around the internet, here are the bands that should have new albums out in 2019, but no dates announced yet. The ones I would give a try (and my kids) will be highlighted in Blue.  The ones with Dates Announced are at the bottom of this post.  The list is building up nicely!!

END_OF_DOCUMENT_TOKEN_TO_BE_REPLACED 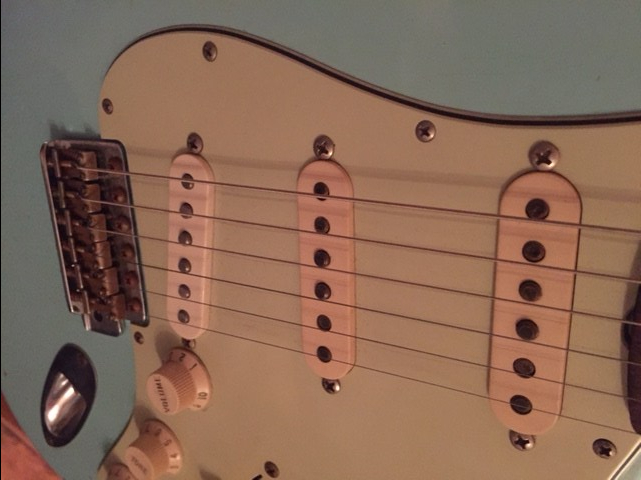 For My Sunday Song #85, it is time to go with a western feel with “Modern Day Cowboy” by Tesla.  The song was the band’s second single on their debut album ‘Mechanical Resonance’ released in December of 1986. The single was released in 1987 and peaked at only #35 on the US Mainstream Rock chart which surprises me that this song and these guys didn’t blow up more than they did.

The song became an instant favorite of mine the second I heard it with that monster opening guitar riffs with Frank Hannon and Tommy Skeoch.  Then the song changed up the guitars to acoustic and then back and forth with the electric guitars.  The two were simply scary good.  The whole cowboy theme song was probably take due to the success of Bon Jovi’s “Wanted Dead or Alive”.

“Modern Day Cowboy” takes you through some of the bad boy cowboys through time starting with Billy the Kidd; then going to the Original Gangsters Al Capone and Bad Boy Jones; and finally moving to present day with our leaders of U.S.A. & the U.S.S.R. and their six guns or in this case nuclear weapons.

END_OF_DOCUMENT_TOKEN_TO_BE_REPLACED

I am so excited to see that Def Leppard announced their latest tour dates for their North American Tour.  They will be going on the road with Poison and Tesla, an 80’s throwback show it appears.  The only disappointing thing for me as that the three will not be coming to Charlotte because Def Leppard will be headlining the Carolina Rebellion Festival in May.  I hope I get to go to the Rebellion to see them, but first I need to find someone willing to go with this old man.

Here are the dates below.  See if they are coming to your town and if so, you have to go see them. Def Leppard still puts on one helluva show.  For more info go to Def Leppard.com

* NO POISON OR TESLA

I have been going through this rock & roll trip down memory lane with this blog.  It started with the vinyl records I found in a box and than last week with the posters.  I actually found one more box from my younger days and this one had a ton of concert ticket stubs from over the years.  I also found a couple concert T’s and a couple programs as well.  I still can’t believe I kept all this stuff, but I am glad I did.

Going to a concert nowadays, they don’t give you a physical ticket anymore.  If they do, they charge you for it.  Nope, tickets are on your phone and get scanned in or you print it out on your printer.  Not the same as those dot matrix printers from the old days.

You also used to stand in line for tickets.  You had to arrive an hour or two before the tickets went on sale whether it was hot, cold, raining or snowing.  We did it each and every time we wanted to go see a show.  And we loved it!  Now you go online from the comfort of you home…not the same.

Whether you want to or not, I am going to take you on a journey of my musical concert experiences…at least most of them because I think I am missing quite a few ticket stubs.

Our journey begins back around 1983.  I was only 14 years old.  My parents finally agreed to let me go to a concert, but I had to go with my sister…REALLY!!!  Actually, it was okay.  My sister and I have been to many concerts together and even went to one 2 years ago some 3o+ years later.