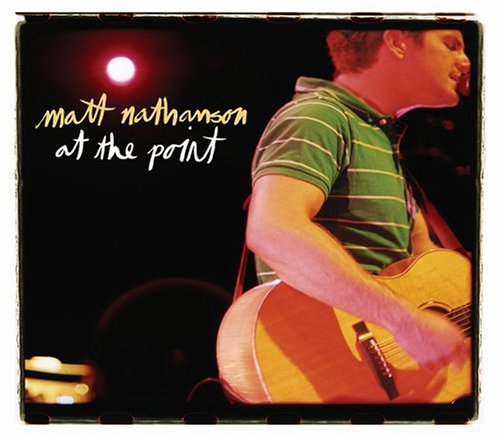 ‘At the Point’ was recorded, well, at The Point.  The Point is an intimate club in Philadelphia, PA.  It was recorded in the Summer of 2005 and released in 2006.  It is only Matt and his acoustic guitar.  Nothing or no one else.

What I love about this album is it is a lot of his old songs from before my discovery of Matt which was around 2007 or so.  The album showcases his live performance, his ability to own a crowd, his comedic stylings (he is one funny SOB), his voice and most importantly his songwriting and musicianship.

From such classics as “Church Clothes”, “Answering Machine”, “Curve of the Earth” and “I Saw” to his cover of Dire Straits’ “Romeo and Juliet” and Drivin’ N Cryin’s “Straight to Hell”, you get lost in his performances as they are delivered so flawlessly and seem so personal.  You get laughs as he tells stories that will have you laughing your ass off and you just get an hour and seven minutes of pure enjoyment.  This is what a live album should be.  Something you can feel and connect with.

I would give this a 4.5 out of 5.0 Stars as it captures who and what Matt Nathanson is all about.  The only reason it isn’t a perfect 5.0 Stars is due to the sound at times was hard to hear him when he was chatting, but other than that it is utter brilliance!!

P.S.  Matt, if you should ever read this review, can you start putting your earlier work out on Vinyl. I would love to own those albums on vinyl.  Thanks man!!

Aerosmith’s ‘Classics Live! II’ album review is up now at 2loud2oldmusic.com. Go check it out!
You Picked It! The review you wanted me to do is up now at 2loud2oldmusic.com. Queensryche’s Rage For Order. Was it as good as I remembered? Check it out and see.
I think I may like this album or I have a serious problem! Not sure which. Is it too much? Def Leppard’s ‘Hysteria’.
Stryper’s ‘The Yellow And Black Attack’ on beautiful blue vinyl.
Kiss ‘Destroyer’ on 8-Track. Who still has one of these?
George Michael’s ‘Listen Without Prejudice, Vol. 1’ on vinyl. Finally found one in the wild. So many great songs #freedom90 #prayingfortime #somethingtosave #cowboysandangels