We are on Vinyl #7 and the Final Vinyl from my trip to Paris.  Man, what a collection of bootlegs I picked up and I couldn’t be more thrilled.  I have been enjoying them immensely and they were well worth the money despite what my wife says!

The final vinyl in the collection is from the Epicenter in Fontana, CA on September 25th, 2010 on the bands The Hottest Show on Earth Tour.  The album actually says it is at the Auto Club Speedway, but they even say Epicenter in the show.  So that ain’t right.

This particular bootleg was made in Japan and even has the awesome Japanese obi strip on the album cover as you see on the above picture.  And the back of the strip is some more pictures of the band.

And the back cover is pretty awesome as well as it has a great stage shot of the menacing Demon himself, Gene Simmons.

And since this is a 2LP set, the album is a beautiful gatefold and the cover and the inside picture are spectacular.  Here is the front & back cover in full glory…

And the inner picture is also a great with three separate shots of the band and finally Eric Singer is in a picture.

And if that isn’t enough, included is a Tour Poster of the upcoming Japanese leg of this Tour with 7 dates in Japan during April 2011.  It is a great promotional set to welcome that tour.

And lastly, the vinyl.  There are 2 pristine White vinyl LPs that come with the set.  And if you are going to have a gatefold, you might as well use up both sides with vinyl. 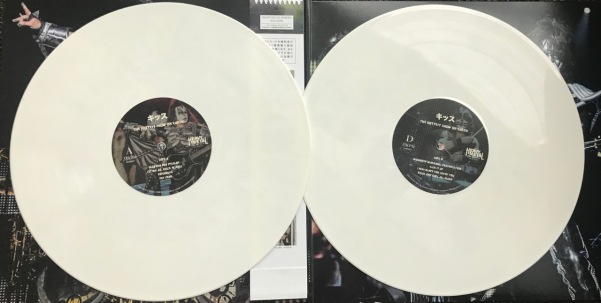 Alright enough jibber-jabber about the packaging which is quite nice, but let’s get to the music because that is what we are here for, right.  I saved the best sounding bootleg for last.  The sound quality is freaking amazing.  It sounds like an actual live album released by the band, yes, it is that good.  You hear everything, crisp and clear!  Now it helped that this was broadcast to the soldiers over seas so I am sure that had a lot to do with it.  All I know, it is the best one of the bunch and I will be cranking this one for years to come!!

The set list is actually cut short at only 15 songs (actual performance of the show).  The normal stop on this tour was around 21 songs, but due to the curfew at the venue, they couldn’t do the whole 21 songs, but it is still awesome.

The album opens with the normal screaming intro of “You wanted the best…yadda, yadda, yadda” like all good Kiss shows.  They go right in to “Modern Day Delilah” which was a great opener. Now I said this was the best sounding bootleg I picked up and that is true, Paul however is not at his best and sounds pretty rough.  Gene sounds great and the band is tight musically.  All-in-all, I don’t care how Paul sounds because it is still Kiss and you can hear the magic is still in those songs.

They go in to 2 classic Kiss songs with “Let Me Go, Rock ‘N’ Roll” and “Firehouse” which go over well with the crowd.  Gene sounds good on “Let Me Go…” and Tommy is ripping it on the guitar.  A great high energy song.  You then get the 2nd and last song from ‘Sonic Boom’, “Say Yeah” (with Paul’s Walmart plug since that album was only released in Walmart and was their current album at the time).  The song sounded great and I am glad I have some live stuff from that album now. 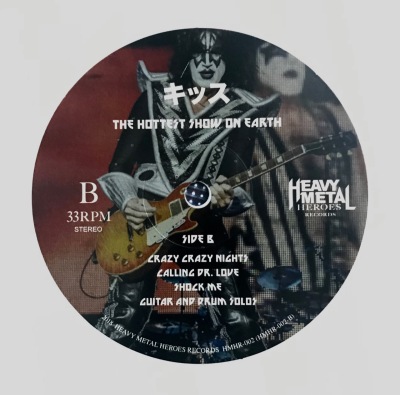 It was cool that this side started out with an 80’s song they dusted off for this tour, “Crazy, Crazy Night”.  With only 15 songs and 2 of them off Sonic Boom, it is nice they through in something different.  To highlight Paul’s vocal problems, Eric and Tommy did the chorus.  Up next is another classic with “Calling Dr. Love”  and Gene hasn’t lost anything.  “Shock Me” comes on and I am quite surprised.  It is with Tommy Thayer on vocals and I think he does an amazing job.  It isn’t Ace, but who cares.  He really does a great job vocally and the guitar riffs and solo are fantastic.

Speaking of solo, the Guitar solo and Drum solo are up and they are done simultaneously.  Both Tommy and Eric share the solo by playing together and then taking their turns being front and center. It was awesome.  Let me tell you, Kiss wouldn’t sound as good today if it wasn’t for these two.  Say what you will about them being in make-up, but they kick some major ass!!

Side C starts out with Paul singing parts of “Love Gun” all by his lonesome.  It wasn’t bad and then he asks the crowd if they should play and of course they say yeah!  They rip trough that song and Gene steps up for his Bass Solo where he breathes fire and spits blood…a busy little solo.  It sounds dark and disturbing like a good Demon should. Now of course we can’t see all that as this is an album, but we know it happens.

After the solo, Gene gets the reins for “I Love It Loud” and the song is just that…Loud!  The band tears it up and then ends the show with a favorite “Detroit Rock City”.  There is nothing stellar or unusual on this side.  It is just Kiss doing their thing which is awesome.  The sound is fantastic, the band is playing well and you can just sit back and soak it all in and enjoy every second of it. 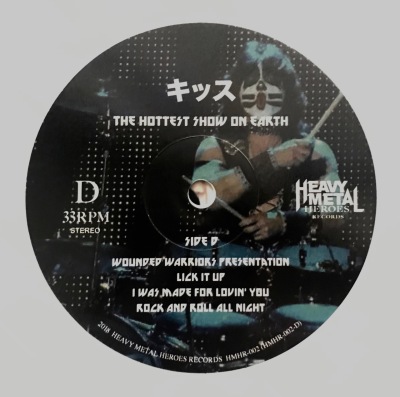 Side D starts off with the presentation of the Wounded Warrior project check.  They were doing this at every show on this tour I believe as the band is a huge supporter of the Military and their families…one of the many good things the band does. You also get the “Pledge of Allegiance” from Paul which is always a plus.

The last three songs are the encore and consist of all classic songs, “Lick It Up”, “I Was Made For Lovin’ You” and of course, “Rock and Roll All Night”.  The band didn’t leave the stage due to time constraints so they just went right in to the encore songs. “Lick It Up” had a little of The Who thrown in to the middle of it.  Since I have been through 7 live album so far, I am really looking to comment on something new to offer for the versions, but nothing new for the final two just great playing and great songs from a great band.

As I said earlier, this was the best sounding Bootleg of the 7, hell of all the ones I have.  If you take that with how well the band played and sounded (and yes I am okay even if Paul was a little off), it is my favorite Bootleg I own as it sounds. It might not have the best setlist, but it is still so good that it will get a lot of listens.  I will give this one a 5.0 out 5.0 Stars.  It is well worth grabbing if you ever see this show out there.  You won’t be disappointed.