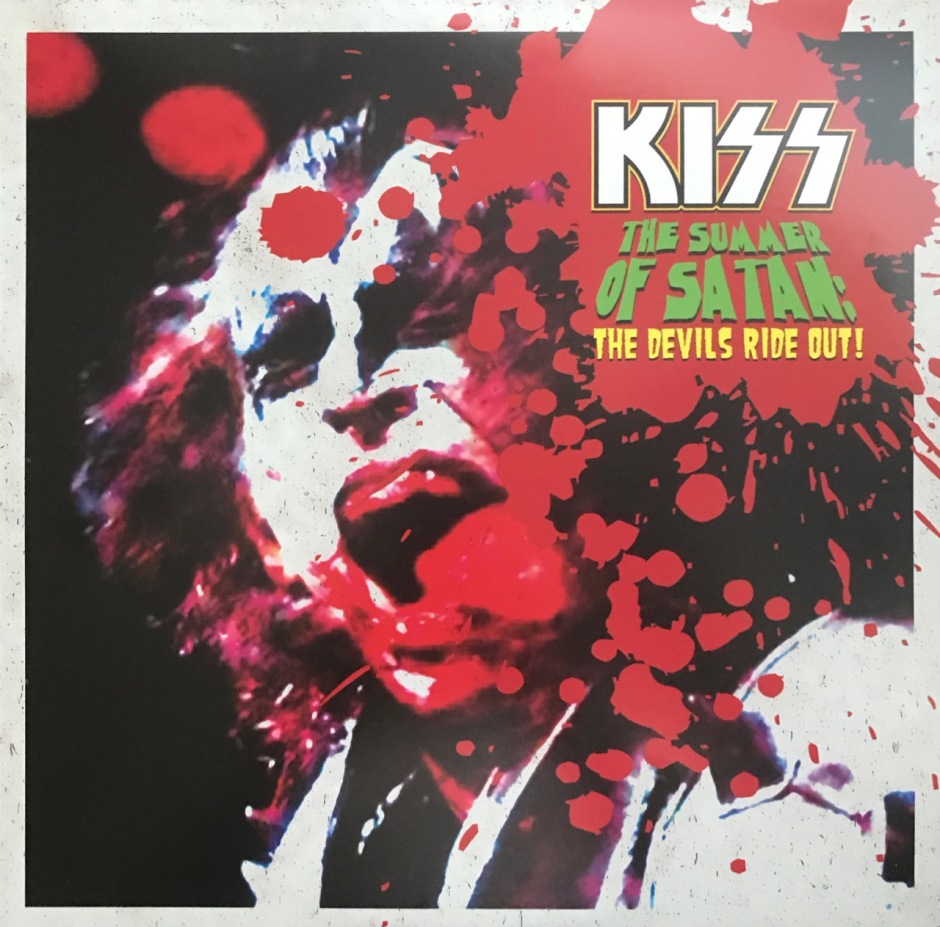 And now we are on the third Kiss Bootleg I picked up in Paris.  This one is a beauty.  It is called “Kiss – The Summer of Satan: The Devils Ride Out!”.  The package is fantastic on this release as you get a beautiful gatefold, some awesome pictures on the vinyl sleeves and some colorful vinyl.

The show is at the Roosevelt Stadium in Jersey City, NJ on July 10th, 1976.  It is a full soundboard recording (and I believe this show was videotaped as well and circulating).  You get 15 tracks plus 3 solos, so yes, a full show.  Before we get in to the music, as always, let’s go over the packaging.  You’ve seen the cover above, now take a look at the back cover.  It is a picture of the band on motorcycles.  I really cool shot! 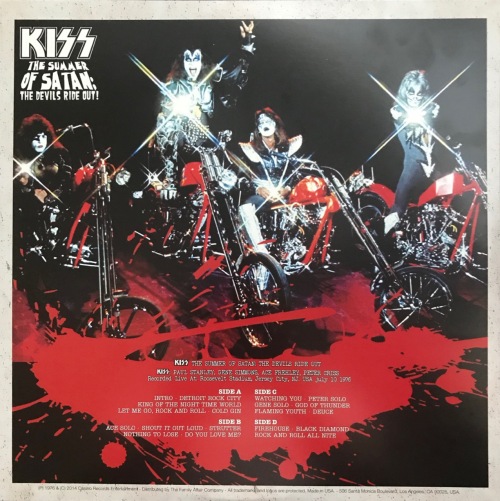 And It is a 2LP set and they did it right with a gatefold.  The full picture on the gatefold is a shot of the stage with all the band and the Kiss Logo!!  Okay, Peter is  little blurred by the smoke…lots of smoke. 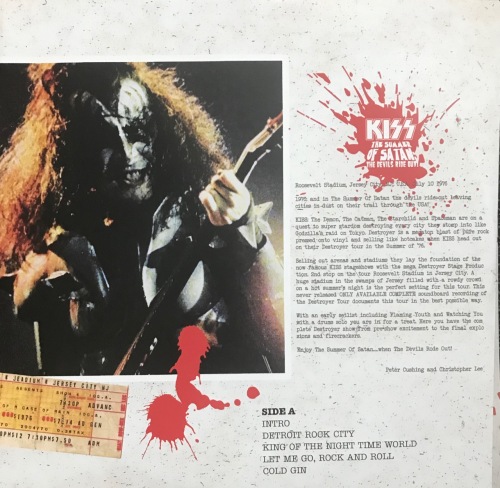 For the other three sides, you get a large picture on each sleeve of a member of the band plus smaller pictures each with their own little captioning from song lyrics and things said in the show.  It is very nicely done. 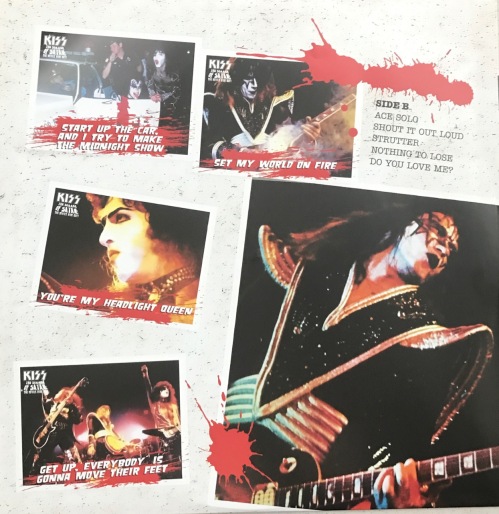 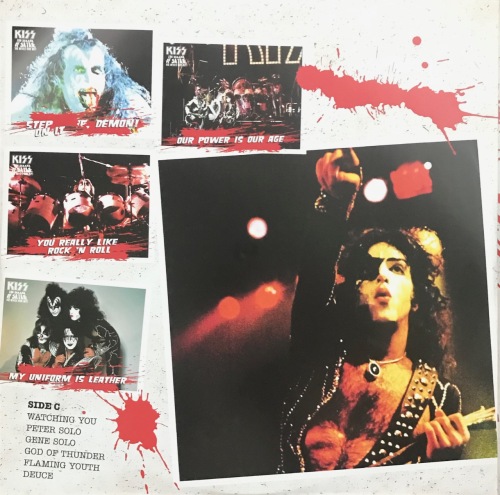 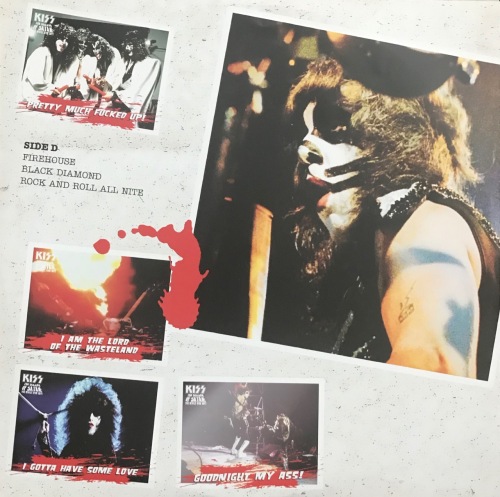 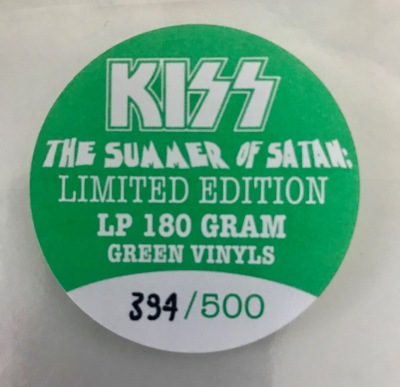 And now we are to the vinyl.  They are really cool translucent green color.  I don’t think I have any colored vinyl that are this color so nice addition to the colored vinyl collection. 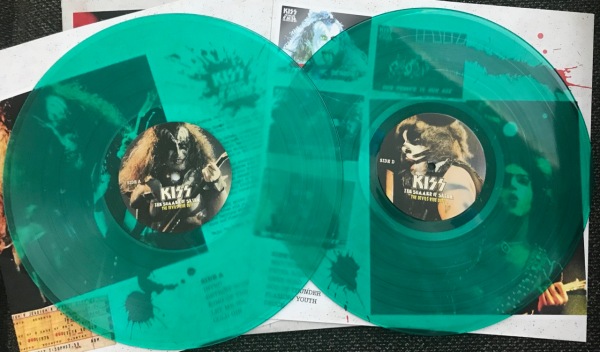 And now to the set list.  It is impressive!

The Intro is really long and freaking bizarre at is a few songs playing including The Stones, then some lady starts doing an intro like it is a radio broadcast, then an instrument that sounds like tuning and eventually we actually get to the Standard Intro of “You Wanted the Best, You Got the Best, The Hottest Band in the Land…KISS!!!”.

They kick off with the same old, same old (well same old, same old now then it was fairly new).  The sound is really great being a soundboard recording.  Everything is pretty clear although a little uneven as it isn’t blended all that well.  It is rough at times, but purely live and untouched…which is fantastic.  This is the best sounding one of the three so far. 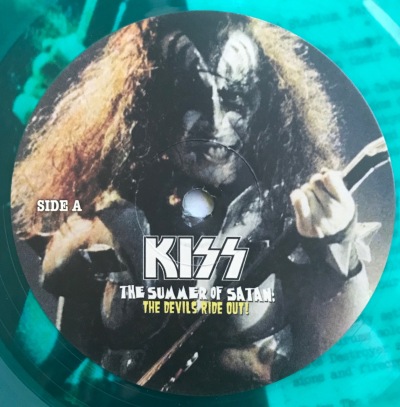 The first big treat for me on this is the Gene Simmons led “Let Me Go, Rock and Roll”.  This is definitely one that didn’t get played much for awhile so I love having this version.  Gene sounds great and honestly, he usually does.  Peter is killing it with his fills and though the tempo is a little fast but still banging!!

One funny thing on the album is a couple guys near the soundboard keeping annoyingly shout out song suggestions, especially “Black Diamond” like they are going to play that song this early in the list.  It would have been great if someone would have knocked them on their ass to shut them up!!!  It is really more funny than annoying. 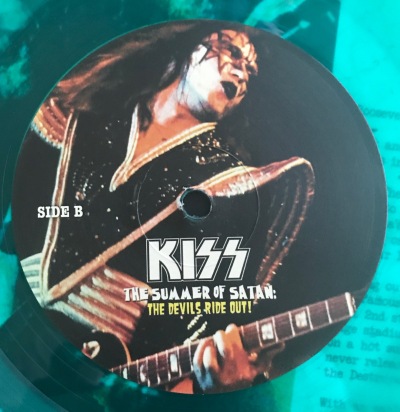 Side B kicks off with Ace’s solo and it sounds fucking awesome!! Excuse my language…but it does!! The speed at which his fingers go on this one are ridiculous.  It sounds like he truly is from Outer Space!!

The treat songs on this side for me were “Nothing to Lose” and “Do You Love Me?”.    Two of my favorite deep cuts.  Gene sounds great and Peter comes in and screams out his part on “Nothing to Lose”.  The band just clicking on all cylinders!  Paul’s banter is great throughout and this song just fits him so well.  And “Do You Love Me?” comes blasting in.  I don’t know why, but I really Love this song.  It isn’t the best version of it live, I have heard, but I enjoy it every time I hear it. 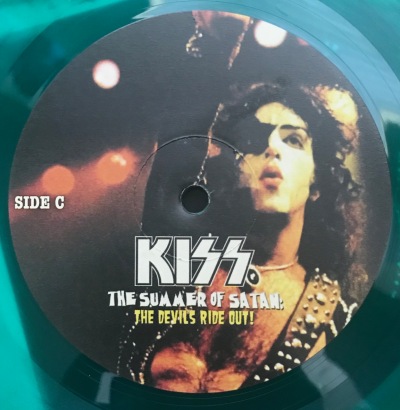 Side C kicks off with that same idiot screaming out “God of Thunder” this time.  Instead we get the treat, “Watching You”.  If you notice, my favorites are the ones that aren’t played as frequently live anymore so that is why these are the ones I enjoy the most.  The other standard, classic tracks I will hear again in August when I see the band for one last time.  You then get Peter and Gene’s solos back-to-back which I found strange, but whatever, they are the boss.

On “God of Thunder”, there is a point in the recording that drags like a tape which is probably what is happening to the recording source.  A little distracting, but really no big deal.  After that you get ‘Flaming Youth’ which is another personal favorite of mind.  As a kid, my brother had the 45 Single of this song and I played it a lot (I have it now). 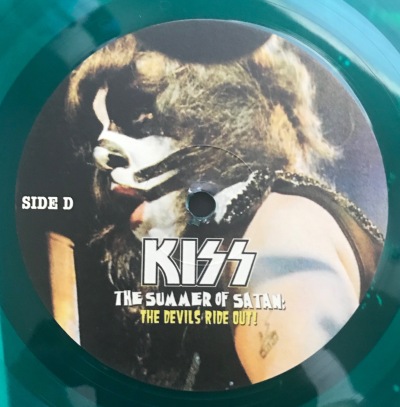 And the final side, Side D, is basically the encores.  You have “Firehouse”, “Black Diamond” (finally, so now that  poor annoying fan can shut the fuck up) and of course, “Rock and Roll All Nite”.  They were all great, however, I get them all the time so nothing fantastically new or different about them for me.

And that is it!  This show is a great listen from beginning to end even.  Like I said, the sound is from a soundboard and is clear and fabulous if not a little uneven at times.  Vocals were wonderful, Gene’s bass was thumping, Peter’s drums sounded great and Ace’s guitar was clear…Paul’s was a little light at times and harder to hear, but that is the only real complaint about the recording.

All-in-all, I would give this one a 4 out 5 Stars.  It is the best sounding of the 3 reviews I have done so far and this one will get numerous repeats due to the quality.  The packaging is top-notch and the colored vinyl is sweet.  I really love almost everything about this one.  You never know what you are going to get with bootlegs, but this time I got a beauty!! Grab it if you ever see a copy…highly recommend!!!

21 thoughts on “Kiss – ‘The Summer of Satan: The Devils Ride Out!’ (Bootleg Series) – Album Review”