I am not sure how you review a greatest hits album.  The songs are supposed to be all good because it is…well…a greatest hits compilation.  The term “great” is already applying to all the songs.  With that being said, this is more of a review of the whole package as I picked this up on vinyl recently and thought it was spectacular.

The cover was the first thing I noticed.  The red color was so bright and shiny, the metal of the aircraft looked like real metal and the the rivets were raised and you could run your finger over them and feel each bump.

The package was a gatefold like all good 2LP sets should be.  Although not a single picture of the band to expand both sides, it is still a great set of pictures to feel up the space.  Let me tell you, having the LP release, these pictures are really large and so crisp and clear.  Excellent work was put in to the release.

There was an insert included that all the writing credits of the songs used on one side and a letter from Dave Grohl from September 18, 2009 about the band. 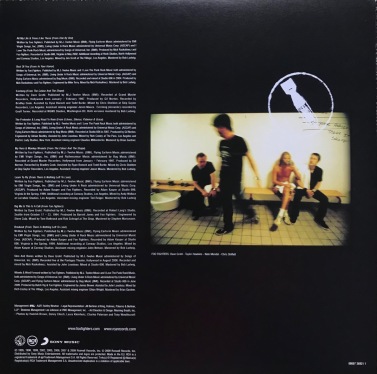 And that isn’t enough.  Each of the vinyl sleeves are done quite nicely as well.  Each one was on a strong cardboard sleeve each side highlighting a member of the band.  The first LP has Dave Grohl and Nate Mendel as follows:

The 2nd LP contained the other 2 members, Chris Shiflett and Taylor Hawkins. 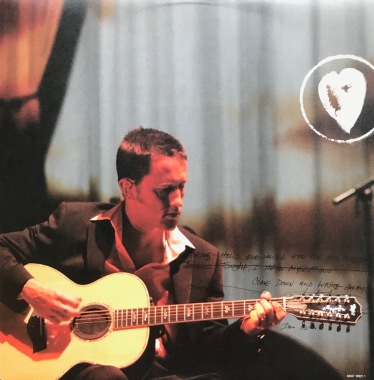 Now, Dave Grohl was very displeased with this release as he was completely against a greatest hits release.  He wanted these to come out after the band called it quits.  Well, record companies are in the business to make money and they will do just that.  Citing a loophole in the contract, the record company released it anyway.

If that wasn’t enough, then Dave bitched that it wasn’t the best representation of their greatest songs…okay, what band that has this many hits really has a greatest hits album that covers all the best…that answer would be slim to none and slim would be leaving the building. 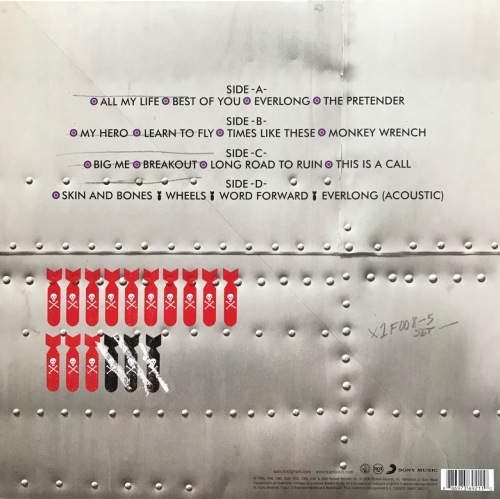 You get 16 tracks including two new ones, “Wheels” and “Word Forward” and unreleased track “Everlong (acoustic version)”.  The songs span all the albums up to this point including the following:

The first LP is really awe-inspiring with the opener “All My Life” which is one of my favorite tracks and go all the way through to “Monkey Wrench” there is not a bad song.  This one will get played to death at it truly lives up to its greatest hits name.

The 2nd LP is a little less inspiring. Side C is fantastic as it is more of the same, but the Side D is not all that for me.  I do like the live version of “Skin and Bones”, however, the new songs, well, let’s at least discuss those.

The first one is “Wheels” and probably the better of the two as it is very catchy and all, but it is more pop rock than Alt Rock.  There isn’t much punch to it and maybe it is a band maturing, but doesn’t fit with these other songs. Out of the two though, I would keep it.

“Word Forward” is along the same vein as “Wheels” but even more dull if that is possible.  Am I being harsh?  Too bad. It attempt to have attitude as Dave curses and tries to get angry, but musically it doesn’t match with the vocals.  Good attempt but off the mark.

I would have preferred maybe “I’ll Stick Around” to one of the new tracks (huge omission!!), but it is still a great set of songs.

Overall, I do love the set.  I think the packaging is fantastic.  The sound quality is crisp and clear on vinyl and I feel like I can hear every note from every instrument.  Great quality.  The first disc is better than the 2nd, but still great overall.  The new songs are okay and all but I am not sure they deserve to be on here which is a drawback.  I would still rate it as a 4.0 out of 5.0 Stars. That first disc is so good it keeps the score high.  I am not planning on on working on my Foo Fighter vinyl collection any time soon as I have too many other bands I am working on right now, but this is a great one to hold me over.  I am a casual fan and this is perfect for that casual fan.  Grab it if you see it.