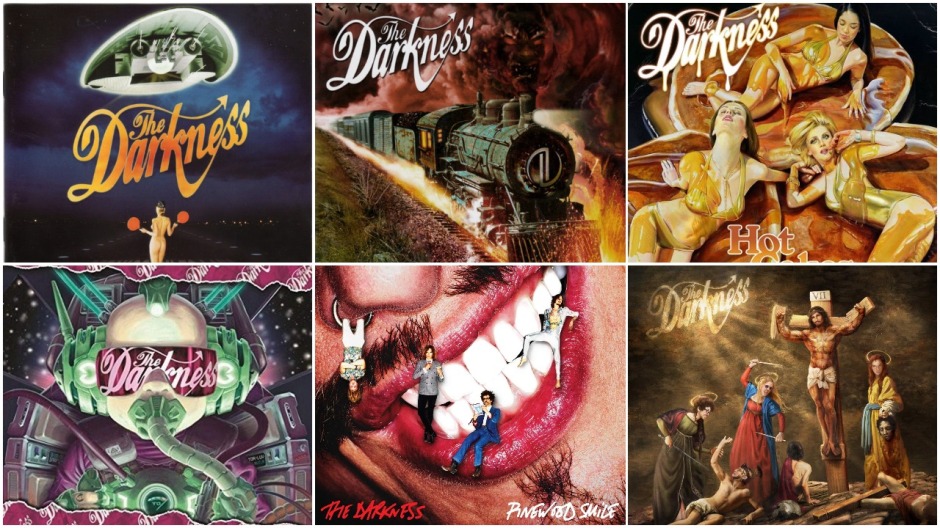 The Darkness came out of nowhere in 2003 with the song “I Believe in a Thing Called Love” and when I heard that song, I was hooked.  It was so 80’s retro and 70’s glam all rolled in to one while at the same time being a little tongue-in-cheek.  I didn’t even know if this was a parody of if these guys were for real, but I loved it.  Thankfully, it was for real.  Lead singer, Justin Hawkins, has this insane falsetto that not many people could ever think of doing and the band is loud and awesome.  After their second album, the band hit a rough spot.  Justin entered in to rehab and afterwards decided to leave the band.  On hiatus they went.

Not knowing if they were ever to return, I was sad not having them on the music scene.  Then in 2012, some 6 years later, they returned with their 3rd album “Hot Cakes” and have been on a regular basis about ever 2 years and they keep getting better.  18 years now after the release of their debut album, there is still 3 of the 4 original members in the band which is pretty impressive in today’s world.  The members are as follows:

With the 2019 release of “Easter is Cancelled” which had my #1 song of 2019 with “Rock and Roll Deserves to Die” and was their 6th studio album, I felt it was time to do an album ranking. So sit back and enjoy The Darkness albums ranked Worst to First!

2012 saw the release of “Hot Cakes” which was 6 years after their last album, a rehab stint for Justin Hawkins and a breakup of the band. Hopes were high for this one and were quickly dashed.  What happened to the heavy guitar sound?  What happened to the catchy songs and the fun that was the band.  This album fell completely flat for me.  The production I believe was the issue.  The guitar sound was flat and everything seem to be dulled.  I had a hard time with this one and still do today.

It is not to say there aren’t a few great songs, but overall it did nothing for me.  I liked the opening track “Every Inch of You” and “Everybody Have a Good Time” as I could put them up against any of their other albums best songs.  I even liked “Nothings Gonna Stop Us”, but other than that I can’t really remember the other songs.  Luckily this is the only album that fails to inspire for me. 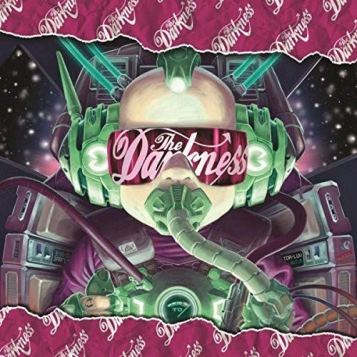 The band got back on my good side with the next release ‘Last of our Kind’.  This album found a little more life than the prior album.  The heavy sounding guitars were back, the catchy songs and the fun of The Darkness returned and brought me back in the fold.  This album is more consistent in quality of song, even more so than #4, but it was missing some of the Classic Big Hits.

There were some great songs, but not as many as the remaining albums on the list.  I am particularly fond of the opener “Barbarian” and even love the song “Hammer & Tongs” which is full of the band’s humor that I love so much.  A band that never takes themselves too seriously.  You can’t leave out “Open Fire” and “Last of Our Kind” as great tracks either.  A more solid release,  but still just missing the mark of greatness.

Two short years after their last release, The Darkness are back and on a roll.  The album was full of big songs, big guitar and big fun.  Songs like “Solid Gold” and the line “And we’re never gonna stop shitting out solid gold!” scream “Hell Yeah!” this is going to be great.  And it was…but it’s only drawback is there were a handful of misses on this release which is why it is kept out of the Top 3…if only barely.

Aside from “Solid Gold”, you get “Southern Trains” and “Why Don’t the Beautiful Cry?” to keep the party going.  Not to mention “All the Pretty Girls” and Happiness to move you along the way.  It has enough great songs to keep it entertaining that you keep hitting repeat with only a few skippable tracks.

The follow-up to their impressive debut, ‘One Way Ticket…’ picks right back up where that one left off.  This beast of an album was so close to being tops, but after 7 most impressive tracks in a row, the last 3 fizzled out and left it a little short.  To make the top 2 spots, there can’t be a bad song on the album. If this song was 7 songs only, this would be tops as the songs are incredible.

“One Way Ticket” kicks it all off and again I am taken back to a time of glam and good time rock & roll.  And do you want humor? Then “Knockers” will give that to you in spades.  And the train keeps rolling with “Is It Just Me?” and “Dinner Lady Arms” all the way through to one of my favorites, “Hazel Eyes”.  There are too many enjoyable tracks to name.  You won’t go wrong this one.

It is really nice to see that their newest release is so high in the list.  This album reassured me that this band still has a lot to offer. There is a renewed energy and excitement for me with this album.  It is almost like rediscovering a band I had forgotten about (even though their last album was 2 years earlier).  This release has every box to check off…Great guitars, great drums, the glam influence and most importantly, the tongue-in-cheek hour.  Again, this is band that does not take itself too seriously and you shouldn’t either.

And where to begin on the songs?  Opening track “Rock and Roll Deserves to Die” is one of the best rock songs to come along in years…I’m serious!!  “Heart Explodes” and “In Another Life” are another two stellar, outstanding tracks.  But not to be outdone you have “Easter is Cancelled” and “How Can I Lose Your Love”. And for humor, there is “Heavy Metal Lover” who is so metal she could rust and “Deck Chair” which is an ode to well…a deck chair. From beginning to end, I loved every minute.  If it wasn’t for the debut album being so awesome, this would be #1.

From the opening note on the first single and Justin’s freakishly high notes on “I Believe in a Thing Called Love”, I was hooked and the world was blown away.  Glam rock saw a brief re-birth and I found a new favorite band.  No one out there sings like Justin (for good or for bad) and the songs take me back to when I was a kid.  Back to when music was fun and not trying to get a point across other than let’s party and rock & roll.  The guitar solos and drum beats were all that mattered and then of course…that voice.  This album is just as good today as it was 17 years ago.

The opening track of “Black Shuck” blast out of the gate with the heavy guitars and pure rock adrenaline.  “Get Your Hands Off My Woman” and “Growing On Me” keep the party going and the fun doesn’t seem to want to stop.  I really dig “Love Is Only a Feeling”, “Stuck in a Rut” and “Friday Night” and so many more.  The album is a consistently blast of a good time.  Too bad all their albums couldn’t be this good.

And there you have it, The Darkness’ studio albums in order of how I rank them from the worst to the best.  Let me know what you think.  Where did we differ and where did we agree.  What is fun about these list is how differently each album impacts people. What I like, you might not, but we like the same artist and that is all that matters really. And if as a result, you find something new, then my job is done!!!

15 thoughts on “The Darkness – The Albums Ranked Worst to First”