After the Whitesnake tour supporting the album, ‘Slip of the Tongue’, David was done.  He had had enough of Whitesnake and called it quits.  He put the band on the back burner and started searching for the next big thing.  In the meantime, Jimmy Page was not getting back  with his former band Led Zeppelin so he was in limbo as well.  Then in 1991, shortly after the tour, A&R guy, John Kalodner, suggested David and Jimmy Page get together and cut an album.  That is funny for one very big reason.  David had been told by critics for years that he was a Robert Plant wannabe…a poor man’s Zeppelin if you will.  Heck, when Robert Plant heard about this project, he called the pairing David Cover”Version”…ouch!

That didn’t stop them though and thankfully for us they plowed ahead.  The album was recorded at the end of 1991 and in to 1992.  However, for reasons I can’t find, the album was delayed until March 1993 when it finally was released. The album had pretty decent success as it definitely went platinum and reached #5 on the Billboard Charts and #4 in the UK. In 1993, a blues tinged rock album to do this good in a landscape that was pretty much grunge at the time, I would say it did more than pretty decent.

The album cover is the merge traffic sign which is a representation of two members of two very successful bands merging together to make a super group.  This merging surprised many people, including myself, as no one ever expected this to happen.  My thoughts back then were, if Zeppelin isn’t doing anything new and neither is Whitesnake, then this will work perfectly to supplement until the ever do.  Plus, I wanted to see if Coverdale was going to go full-on Plant and this be a true Cover”version like Robert had said. 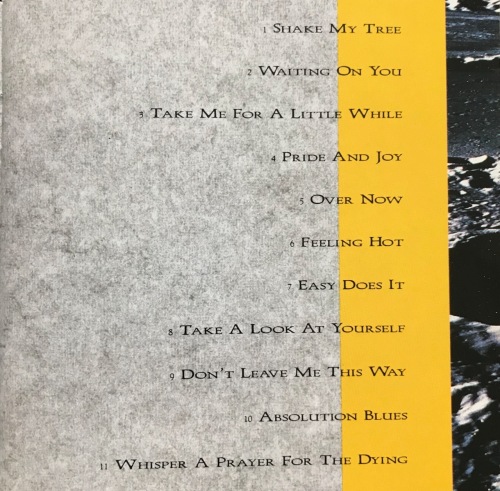 No Side One or Side Two for this review as I have the CD version.  The album version is harder to find and quite expensive.  Maybe they will do a re-issue someday soon (or a box set wit demos and a live show as has been hinted in the press over the last year or two).

The album kicks off with the blues rock song “Shake My Tree”.  It opens with a killer Zeppelin style riff (no surprise at is Page) and Coverdale coming in with a confidence and swagger that fit with the riff.  The song has a slow build and comes crashing in with some stellar drum sound from Denny Carmassi (Montrose, Gamma).  That is one thing that is prevalent throughout the album is Carmassi’s drumming.  He has a sound and style that really helps these songs gel together and fit cohesively in to a single package.  Ok, back to the song.  The riff was written by Page back in his Zeppelin days while working on the album ‘In Through the Out Door’.  He whipped it back out for this project and so glad he did as it was killer.  Throw John Harris’ harmonica playing on top of that guitar and you have magic.

Next up is “Waiting on You” and this one has Whitesnake written all over especially with the rhythm section on it.  It sounds like it would have fit nicely on any Snake album even with the guitar work of Page which isn’t overpowering and actually rather subdued here.  David totally kills it with his blues vocal swagger and he attacks the song with such veracity you can’t help but get swept up in the song.

Then we get the first ballad, “Take Me For A Little While” which is full of acoustic guitars and keyboards and what even sounds like a string section. Jimmy even plays bass on it as well.  It starts off slow, builds a little, goes back to slow and fast again like every power ballad from back in the day.  David loves his ballads and he did a great job with this one as it isn’t too contrived and actually sounds quite beautiful capped off with a sweet sounding guitar solo from Page to put the icing on the cake.

David loves his blues and the next song, “Pride & Joy”, feels like an old blues song…well that is until Jimmy Page comes in and lays to waste everything in its way with some killer guitar riffing.  When the song kicks in with Page’s riff and Denny’s machine gun drumming you know this is something special.  To make it even better, Page also plays a dulcimer and layers it in over the guitar to make it sound that much better. Throw in some more John Harris harmonica and you have the most unique sounding song on the record.  It is the best song by far and might be one of the best song David has ever been involved in throughout his career.

And then we get a slower grooved song called “Over Now”.  Not a ballad and not a rocker either, the song meanders along, however, never finds that sweet spot that takes it the next level.  It feels like it wants to take off and do something special, but it doesn’t know how.  But honestly, anything coming after “Pride & Joy” is going to sound less then.

Things get back on track with the explosive “Feeling Hot” led by Carmassi’s brutal drumming.  The song attacks you at full throttle and never lets you breath.  Jimmy lays down a spray of gunfire with guitar riffs and Jorge Casas bass gives Jimmy the cover fire he needs for this full on assault.  David feels right at home as he has the vocal chops and confidence to make a song of this speed and heaviness work.  Any 80’s rocker would love this song, especially in 1993.

Another slower track is next with “Easy Does It” which you need to catch your breathe after “Feeling Hot’.  It has a nice groove thanks to Ricky Phillips on bass.  Carmassi’s percussion work has some nice subtleties before the song kicks in and his drumming powers the song.  Page throws in some nice riffs but nothing overpowering.  This song is more for Coverdale to sing his blues style.  The song titles fits the feel of the song.

Then we are back to a ballad with “Take a Look At Yourself”.  It is very melodic, but this one feels contrived.  It feels forced and is a little over the top sappy.  A love song guilty of being too cheesy. And that is all I have to say about this one.

“Don’t Leave Me This Way” is one of David’s favorites off the album.  It is another slower song, but I love the darkness that surrounds it and embraces it.  There is a somber feel and Page’s guitar playing adds to that emotion.  Coverdale’s vocals are spot on and so soulful and his deliver fits the song and the pacing that helps bring out the emotion. This is different than everything else on the album and different from a lot of what David has done before. I’m digging this one even if it is just under 8 minutes long.

Then we get to another favorite track of mine with “Absolution Blues”.  The opening of the song is killer.  It builds slowly with a very soft guitar solo and some cool keyboard effects before Carmassi bangs the drum twice and Page slaughters you with one of his most killer riffs on the album.  This might be the most Zeppelin sounding song on the album and David does channel Plant a little on this one (okay, a lot).  It is blues, it is rock, it is everything you want to hear from these two masters.

And the final song is “Whisper a Prayer for the Dying”.  We end with another classic on this album.  It starts off slow and is full of Page’s acoustic guitar and David sings in an almost brooding fashion.  The song picks up the pace as David wails against a driving drum and bass groove by Carmassi and Casas, respectively. The keyboards on this one, by Lester Mendez, add a dramatic effect to the song. This song has that whole “Sailing Ship” vibe in they David ended ‘Slip of the Tongue’ giving you something that sounded epic and grandiose.

The track listing score is pretty great at 9 out of 11 songs being Keepers or 82%.  The album is full of everything you love about both Page and Coverdale.  It was a match made in Heaven.  For me, it was a slap in the face at everyone that said Coverdale was trying to imitate Robert Plant and how better than to do that than perform with Jimmy Page when Plant wouldn’t.  Now, Plant and Page got back together shortly thereafter and did a few things and I like to think thanks in small part to this.

Overall the album might have had two duds for me, but the songs that remain are so strong and some of the best David Coverdale has ever been involved with.  Jimmy Page delivered some stellar and memorable riffs and the whole blues and rock vibe fits these two so well.  The drum sound on this album was top notch as well as there was Denny Carmassi pounding out his sound on each and every song.  That gave the album a nice gel.  Overall, I would have to rank this at least a 4.5 out 5.0 Stars.  Strip those two “Delete” songs out and this would have been damn near perfect.