Towards the end of 1980, Whitesnake released their first live album called ‘Live…in the Heart of the City’.  It was released on November 3rd, 1980 and was originally released as a double LP with 2 different shows. The first being from June 1980 at the Hammersmith Odeon in London and the second show as from November 23rd, 1978  at the same place.  This review, however, is only on the LP version that I have which is only a single LP version with only the 1980 Hammersmith show and missing one song the original had (“Ready an’ Willing”).

The tour recorded for this one is the ‘Ready ‘n’ Willing’ Tour that features new drummer, former Deep Purple master Ian Paice.  And it caught the band at a time when they were starting to finally come into their own.  The track list of the single LP is as follows:

It is short at only 7 songs, but one is 11 minutes long and 2 are over 6 minutes each and all a blast. 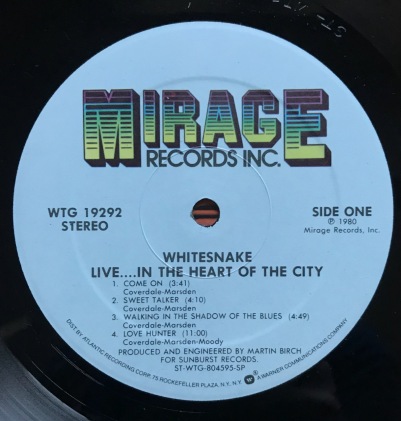 Side one opens with the screamer “Come On” from the ‘Snakebite’ E.P. and what a fantastic way to open the show. A high energy romp that gets everyone on their feet and in to the groove of what is to come.  The band is on fire and David sounds in top form. The band glides effortlessly in to “Sweet Talker” from ‘Ready an’ Willing’ with loads of Micky Moody’s slide guitar and let me tell you the guitars on here are killer.  The tempo of the song is ramped up to 10 and the fly through this one at warp speed.  And don’t forget the Jon Lord keyboard solo in this one that goes right in to Micky’s guitar solo…hell yeah baby!  Keep it coming!

The band goes in to two straight ‘Lovehunter’ songs starting with the blues song “Walking in the Shadow of the Blues”.  Bernie Marsden takes over the lead on the guitar work in this one accompanied by the great Lord on keyboards.  Ian supplying just the right amount of drum fills and as he Neil Murray on bass lay down that all essential groove.  But it is the song “Love Hunter” that is the showcase on this side.  At 11 minutes, including a Micky Moody showcase of his slide guitar work, the live version takes the song in to so many different directions and is what I love about live shows.  David singing here is great as well as he isn’t trying to over sing it and he has seem to found his comfort zone.

“Aint’ No Love in the Heart of the City” opens up Side Two and gives us the name to the album.  It is a bluesy track that keeps a slow groove and let me tell you that the guitar work Moody does is sensational.  The crowd takes over with Murray’s bass thumping away in the background along with Paice keeping time.

And then we get David’s favorite concert saying “Here’s a Song for You” as he does it a lot.  They go in to the classic “Fool For Your Loving” from ‘Ready an’ Willing’.  The song is a little punchier then the album version, it actually reminds me a little more of what was to come with the song in the late 80’s and I am okay with that.  It is a rocking good song.

The last song is the only song from the album ‘Trouble’, “Take Me With You”.  The band is amped up on something as they speed this one up to an exhausting tempo that would leave a lesser band spent.  They feed off the energy and everyone gets a moment to shine with Jon Lord’s blistering keyboard solo, Bernie’s raging guitar solo, a little of Murray’s bass, and Moody blasting through some riffs.  David and company brought all home on this one.

And that is the album.  It is a great live set that I thoroughly enjoyed.  Short and sweet and captures some great moments.  The band was really cooking at this time and they boiled over some fine work with this release.  The first of many live albums to come with Whitesnake and this one started it off right. I will give it a 4.0 out of 5.0 Stars mainly for not giving me the whole show.  This one is a must grab if you find it out in the wild.  Don’t let it slip past you.