We interrupt the regularly scheduled order of albums as I found another bonus LP out during my crate digging. I am little out of order because I can rarely find stuff in chronological order of my reviews.  This Promo single is for “Is This Love” off the 1987 album simply called ‘Whitesnake’ to some and ‘1987’ to others.  Me, I just call it awesome!  The good news about interrupting the series is I get to spend more time absorbing the next album on the list.

There is really nothing special other than it being a Promotional copy.  Minimal artwork and what you see on the cover above is all you get.  The funny thing is that everyone on the cover, with the exception of Coverdale, did not play on the song. It was actually John Sykes (who co-wrote the song with David), Neil Murray, Ansley Dunbar and Don Airey.  They were all fired right after production was finished.  The cover has Adrian Vandenberg, Vivian Campbell (damn he looked young), Rudy Sarzo and Tommy Aldridge, a pretty stellar line-up too.

The back is solid white.  No inserts or any special packaging. A plain and simple promo that says “Not For Sale”…oops, I bought it so somebody broke the rules. Was it me for buying it or Hardy Boy Records for selling it??  I don’t think either of us will get in to trouble, thankfully. 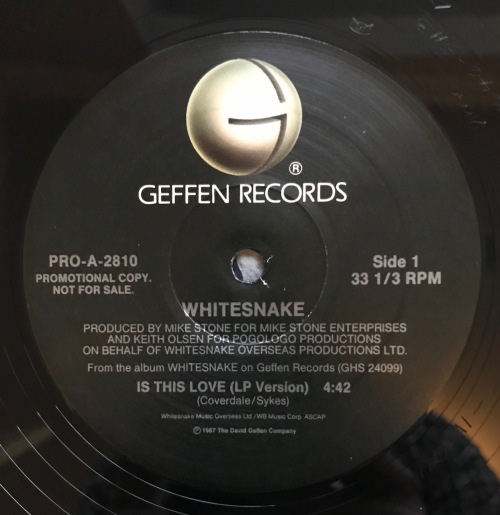 Side A had the LP version of “Is This Love” and the late 80’s were known for their ballads and Whitesnake had one of the best with this track.  “Is This Love” which just missed landing at #1 and stalled at #2.  David sounded so sexy and sultry and the music was soft yet maintaining a slight edge to it.  The song was actually written for Tina Turner, but thankfully, David wisely held on to it and recorded it.  In an album that was almost baked to perfection, this was the icing on the cake.

Side 2 is the “Edit Version” which means it’s a little shorter since this isn’t a dance remix which would then be like 15 minutes long or something ridiculous like that.  This version cuts out the longer synth intro, the solo is a little shorter and the end run out is not as long and drawn out.  It compacts the essence of the song into a shorter and could be a better package.

As far as ballads go, this one is top-notch and easily a 5.0 out of 5.0 Stars.  It checks off all the buckets, slow at times, power at others, emotive singing and love in the title.  What else could you possibly need?  That’s right…Nothing!

Up next…David Coverdale – ‘Into the Light’