In May 1979, the band went back in to the studio to record the follow-up to ‘Trouble’.  In a few short weeks they were done and on October 1st, 1979, the band released “Lovehunter’ to the masses.  The album was recorded by Martin Birch who did ‘Trouble and they recorded at Clearwell Castle in Gloucestershire in the Rolling Stones Mobile and it was later mixed at Central Recorders Studio and Sauna in London.  Sauna???  That is freaking weird.  Anyway, the album did modestly and reached #29 in the UK Chart.  Not a smashing success, but it did chart.

The album was rather controversial.  Not for the music, no that wasn’t it.  It was that cover.  And oh what a cover!!  It was a picture of a beautiful lady straddling a huge snake.  Oh, and she is naked!!  If only the U.S. had this album back in the day…why couldn’t my brothers have owned this one because at 10 years old, I would have really loved this cover.  The artist was Chris Achilleos who was known for fantasy artwork and I believe he was very distraught over the controversy as it was the last album cover he did until 2003 when he did the album cover for Glenn Hughes’ album ‘Once and Future King Part 1’. 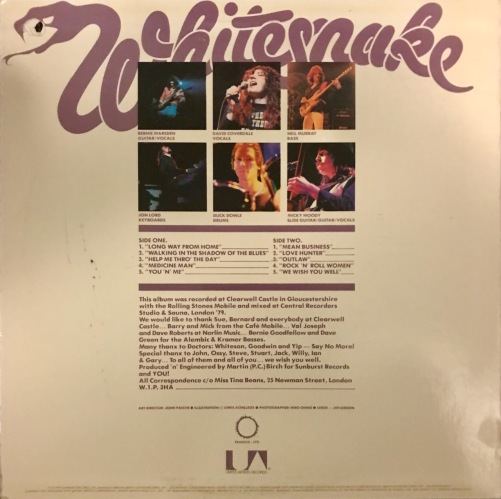 This album would end up being Duck Dowle’s last album as the drummer for Whitesnake as he was replaced shortly after the release by former Deep Purple drummer Ian Paice which would bring the total of ex-Deep Purple members to three.

The inner album sleeve has the lyrics to all the songs, including who did the solos like on the last album which I love to see. And there is a snake that runs from one side to the other spelling out Whitesnake.  Pretty nice when viewed side-by-side.

Enough chit-chat about the album, let us get to the most important reason we are here.  The music. 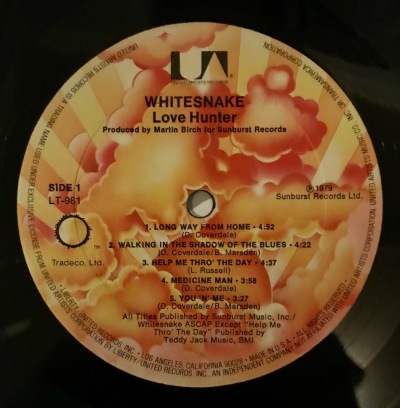 The album opens with the first single “Long Way From Home”.  The single reached only as high as #55 on the UK Charts and was not a huge success.  It would be the only single.  The song though is really great.  A little bluesy, uptempo rock song with a classic Whitesnake song both in style and some slightly suggestive lyrics.

“Walking in he Shadow of the Blues” is my favorite on the album.  It opens with Jon Lord on keyboards and has great guitar riffs.  It is another blues track and this one a little more bluesy then the rest.  Lord’s playing is a standout, but it is Marsden that delivers a blistering solo that took the song to the next level for me. It was his second in a row as he had the solo on the first song as well.

Next up we get a Leon Russell cover of “Help Me Thro’ the Day”.  With this one you can turn the lights down, light a candle and sit back as David slows it down and puts on his sultry voice for this really sexy song.  David turns on the sex appeal and is trying to get every woman to strip down and straddle his snake (like the cover).

“Medicine Man” is David’s version of Kiss’ “Dr. Love” as he is the “Medicine Man, your Dr. of Love”.  Okay, it doesn’t sound anything like that song, but means the same thing for the most part.  This one is heavier track and all Whitesnake.  There is a little two part guitar playing until Bernie lays down another slamming solo.  He is on fire on this album.

With “You ‘N Me”, you get a song that was actually meant for Leon Russell to play which is interesting considering they covered one of his.  This was Bernie’s song and he was convinced to work it for Snake and he and David did just that. The song is another uptempo blues track and has some killer slide guitar work done by Micky Moody.  The only issue is for me it is a little forgettable although still a keeper.

The opening track on side two is a speed bullet of sound and has Jon Lord tickling that ivory faster than a speeding bullet.  He is the Superman of this song and he even gets the solo on this one.  “Mean Business” definitely means some business as it is a kick in the ass to get your heart pumping and excited for Side Two.

The title track, “Lovehunter”, is full of David’s sexually inappropriate lyrics and even in today’s #MeToo movement, I don’t give a shit.  His lyrics still rock.  The song has the that blues tone and some serious slide guitar by Micky Moody and Neil Murray’s bass line is fantastic and lays down the coolest groove.  Along with Moody’s slide guitar you get a twin solo with both Moody and Marsden.  It is that duo that really brings this one home.

Bernie Marsden gets a chance to shine on a song as he sings lead on “Outlaw”.  This one is way better than his outing on ‘Trouble’ with “Free Flight”.  It is an uptempo, almost happy song.  With some great little guitar riffs and Jon Lord ripping through the solo.  The only drawback is it does sound a little dated, but Bernie is giving it his all and does a really good job. It is enjoyable and that the least that you are asking for in a song.

Next is “Rock ‘N’ Roll Women” which is another blues, rock track.  It is a good track and I love that Jon Lord gets another solo (which I love when he does), however, the song is rather generic compared to a lot of their other tracks.  There isn’t enough punch or memorable riffs to keep it in my head and the chorus is not catchy enough.  And yes, you could argue that all their songs are generic, but I think you know what I mean.

Last up is a very short ballad called “We Wish You Well”.  This is a classic Snake song as they play it as fans leave their concerts and it is fantastic.  However, it really is out of place with the rest of the album and isn’t really worth my time.

The track score on the album is 7.5 out of 10 tracks or 75% which is pretty decent. However, I do find some of the songs a little dated and although there are some essential and classic Whitesnake songs on this album (“Long Way From Home”, “Walking in the Shadow of the Blues”, “Lovehunter” and “Help Me Thro’ the Day”) most are not.

On the bright side, David really is starting to come in to his own as he delivers the lyrics with more control and bravado and he really believes what he is singing.  His confidence grows with each passing song and album.  The song is a step up from ‘Trouble’ as there were really no essential Whitesnake songs for me, if only slightly.  And if they keep getting better than the best is yet to come.  I will give this one a 3.75 out of 5.0 Stars.

Up next…Whitesnake – ‘Ready an’ Willing’.