After all the turmoil with the band around the ‘Slide it In’ album and tour, David Coverdale was almost ready to throw in the towel.  After the tour, Cozy Powell left the band and I think Davd had had enough.  However, Geffen records saw something between David and newcomer John Sykes that they somehow talked David in to hanging on and working with John.  The two went and tucked themselves away somewhere in the south of France and started writing…south of France…tough fucking life!!

When they gathered some material, the two embarked to L.A. with bassist Neil Murray to start recording.  But before they could do that, they needed a drummer and along comes Ansley Dunbar to complete the team.  But wait, there is only 1 guitar player and usually there is two and you would be right.  John Sykes recorded all the guitar parts for the album.

Now during the recording, the band had more problems.  One was John Sykes.  John was obsessed over getting the right guitar sound almost to the detriment of the whole project.  Second, David got sick…bad sick. A major sinus infection that almost derailed his whole career.  It was so bad, that John Sykes had suggested bringing in another vocalist to finish the project…excuse me??…WTF???  John, if you didn’t know, Whitesnake is David’s band, not yours.  That did not sit well with David as is no surprise. And right when the album was set for release, David fired the band! Yep, all of them…bye, bye!!

Okay, this is basically the second time this has happened in a row on an album release.  The new band was brought in and it consisted of Adrian Vandenberg and Vivian Campbell on guitars, Rudy Sarzo on bass and Tommy Aldridge on drums.  I have to say that is one helluva a line-up.  David has a way of getting top musicians.

Alright, enough of the drama with the band, let’s get to the music.  The album came out and was a massive success for the band. It went as high as #2, but could never reach number one in the U.S. probably in large part due to Guns ‘N Roses and Def Leppard both having stellar albums that year.  David had finally done it though. He had cracked the North American market and Whitesnake had their biggest selling album.  They were now a headlining arena act in the States.  And to make it better, the fame made their previous album, ‘Slide It In’,  go from Gold to Platinum.  David was riding high.

Now, the videos the band did for this album were also what propelled this album to new heights.  That was in large part due to the sexy, Tawny Kitaen snaking around on top of the Jaguars.  We could write a whole article on those videos alone.  The band playing the videos, of course, were not apart of the actual recordings of the songs (with one minor exception noted below). 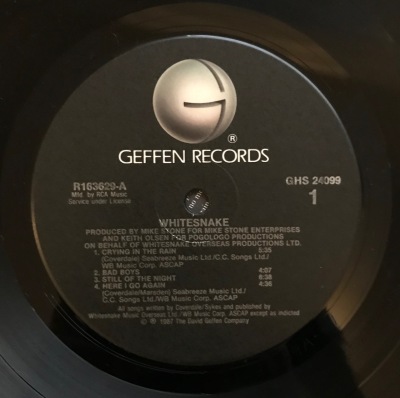 “Crying in the Rain” is the first song up and is actually a remake of the song from the 1982 album ‘Saints & Sinners’.  This version is much heavier and a little less bluesy as Sykes hated the Blues.  The guitars are cranked up and the drums are pounding a little more.  David still sounds fantastic.  The sound is updated to meet the times and has a slightly faster tempo and not as dark of vibe as the original.  It is bombastic and fantastic!  A great song to kick off the album.

The band wanted to keep that energy going because next up is the raucous “Bad Boys”.  Sykes opens up with a speedy tempo riff and then a howl from David and we are off to the races.  Sykes speedy guitar licks and ridiculous solo along with Dunbar’s drumming leaves you exhausted by the end. Straight up power rock song.

Then we get “Still of the Night”, the opening single for the album and the taste of what was to come.  This was a new Snake, a hungrier Snake, a more badass Snake.  It has some blues elements of the old Whitesnake, but Sykes took it, distorted it and turned it on its ass.  David’s swagger on belting out the opening verse is full of confidence and aggression and exactly what every teenage boy wanted to hear (and girl wanted to see). The guitar solo on this was awesome, almost a cello/violin/string instrument orchestration to the whole thing.  Pretty freaking cool.  And last a fun fact, this song was based off an old demo David and Ritchie Blackmore had worked on back in the Purple days.

“Here I Go Again” is the final song on Side One and is another remake of an old Whitesnake song.  Like “Crying in the Rain”, this is also from ‘Saints & Sinners’.  The song kept to the original blueprint, but added a lot of synthesizers as opposed to the organ sound used on the original which had more of a church-like vibe to it.  The biggest difference is where they replaced the word hobo to drifter in the line “Like a drifter I was born to walk alone”.  Coverdale was afraid it would sound like homo if he left the word hobo in the lyric. This is the one song that Sykes doesn’t do the guitar solo. It is done by Adrian Vandenberg who was not yet a member of the band.  This song was the band’s first #1 song.  David had finally done it!!

The final single off the album is the opening track to Side Two.  “Give Me All Your Love” didn’t do that great and only hit #48 on Hot 100 Billboard chart.  The song does have another killer guitar solo by Sykes (on the ’88 Remix, the solo was replaced by Vivian Campbell’s solo).  It is another rocker and what people came to expect from the heavier songs on the album.

And then comes the ballad.  Sorry…THE BALLAD!  The late 80’s were known for their ballads and Whitesnake had one of the best with “Is This Love” which just missed landing at #1 and stalled at #2.  David sounded so sexy and sultry and the music was soft yet maintaining a slight edge to it.  The song was actually written for Tina Turner, but thankfully, David wisely held on to it and recorded it.  In an album that was almost baked to perfection, this was the icing on the cake.

“Children of the Night” brings back the rock with Sykes opening riffs and Dunbar pounds away again.  A hard driving song and another that sees David in his comfort zone. This song asks the age-old question of “Are You Ready to Rock?” and with this one, Whitesnake definitely is.  Sykes destroys another solo that is both fast and slick.

Next up is “Straight From the Heart” which is a lighter in tone then the previous rock songs on the album.  Still heavy but not as edgy.  The extra synthesizers keep it to be more fun sounding than tough.  You listen to it, you have a good time.  I guess you could say it is a little cheesy.

The band ends the album with “Don’t Walk Away” which is another ballad and a little of a let down after all the rocking.  I would have preferred another rock track to take us out.  It isn’t a bad song, just not as strong as anything else on the album.  A little more filler than killer.  Kind of a letdown after the rest of the album.

The Track Score is 8 out 9 Songs or 89%.  This album was the gateway album to this band and I have never looked back since.  Except when I looked back at their earlier albums, but that isn’t the same thing sorry.  This album came out my Senior Year in High School and just blew me away.  1987 was one of the greatest years in Rock music and this was a large part of that reason. The songs were so strong and David hadn’t sounded better.  If it wasn’t for the last blip of the last song, we would have had another perfect record from Whitesnake.

My score is going to be a 4.75 out of 5.0 Stars.  Whitesnake seemed to hit their stride at the right time and finally was able to connect to the North American audience.  David had finally reached the success he had been looking for all along thanks in part to John Sykes.  It is too bad that relationship didn’t last longer.  But, the next relationship of Adrian Vandenberg and David works out pretty well too!

Up next… Whitesnake – ‘Slip of the Tongue’.