Welcome back to the Gene Simmons The Vault review.  We are now on Disk 10.  Below are the rules I am trying to follow with each review.

The songs aren’t in chronological order.  Gene states each disk is more of a mood or vibe.  The vibe of this one appears to be a little all over the place.  I had a hard time getting in to this one.  Let’s see what the result was.

And the track listing is on the flip side… 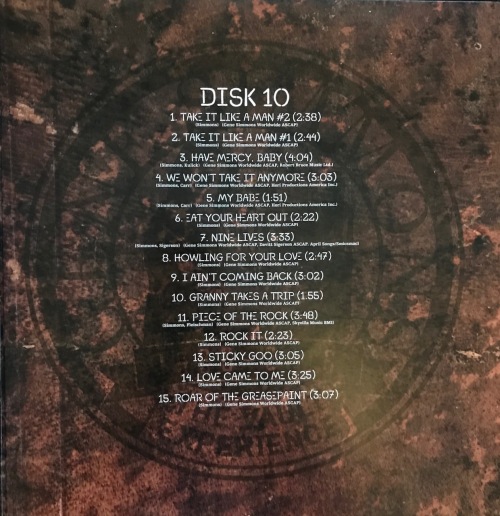 This Gene Simmons written track was a re-record of the demo from the Asylum album.  It was recorded in 1997 and Eric Singer and Bruce Kulick were brought in to assist in the recording.  The song is rock and Gene imagined it as a full band song with each person getting a verse.  Towards the beginning he even said who would sing it and then sing it in the voice. He was sort of disparaging to both Peter & Ace with the line he sang in their voice and it was hilarious…sorry guys.  The Vault book actually has the running order for these first two tracks backwards on yet another mistake on The Vault.  Okay, the song.  It rocks out and would have made a fine Kiss song if ever properly finished.  Who knows maybe someday.  (GRADE 4)

This is a very early demo of the song that is stated that it was for the album ‘Asylum’.  It was recorded somewhere around 1983-1984 and is basically a drum track with Gene on Bass and a guitar layered in later.  It is interesting to here these two versions together and see the growth in the song.  I do like this version that is really heavy on the bass as Gene goes really badass on it.  Still not as good as the previous version, but shows promise.  (GRADE 3)

The minute I heard this, I could hear Bruce Kulick.  This is a Gene and Bruce song as they would sit together a lot and noodle around.  This was recorded in November 1986.  According to Gene it is Bruce’s chords and and his guitar solo, but Gene did the rest.  It is a solid rocker that was considered for Crazy Nights and is better than some of the songs on that album so not sure what happened.  It sounds 80’s and I love it.  (GRADE 4)

“WE WON’T TAKE IT ANYMORE”

Written by Gene and Eric Carr and even has Eric playing drums and guitar.  Written during the “Lick It Up” album, but wasn’t considered for an album until Asylum.  It was recorded in 1983 and the sound is really rough as it was recorded on a 4 Track in a hotel room.  It still needs some work, but it has potential.  (GRADE 3)

The second Eric Carrr and Gene song in a row, pretty cool.  But this song isn’t.  Eric is doing the guitar thing again on this one and the drums and Gene on everything else.  This song is not a really a diamond in the rough.  It is a simple rock track that repeats “My Babe” way too much.  Pretty weak for me.  (GRADE 2)

“EAT YOUR HEART OUT”

This is the demo of what would wind up ‘Monster’.  However, this demo is from 1977 or 1978 and ‘Monster’ was 2012.  It was written by Gene and has Joe X from the band Starz on drums.  This demo was based more off the Doobie Brothers sound and is quite different from the version on ‘Monster’.  The demo starts off with a Gene on acoustic which were probably his first thoughts on the song then kicks in to the actual demo.  You don’t get that cheesy opening you get on ‘Monster’.  This goes right in to the music.  It is a heavier mix and doesn’t have solo as good as the final version, I like this version better than the final.  (GRADE 4)

This song was written by Gene and David Sigerson in 1986.  David would become President of Mercury Records.  They wrote the song from a conversation about cats and how they had 9 lives.  Clever…not!  The demo was just Gene on pretty much everything except it does have Bruce on guitar and the solo.  Gene says it was based a little of  the spiritual song “Wade to the Water” and a little of “I Love It Loud”, but I don’t hear that part.  It isn’t terrible, but it isn’t great either.  (GRADE 3)

“HOWLING FOR YOUR LOVE”

This was written by Gene and recorded in 1976.  It was written for The Demon himself and sounds like early 70’s Kiss.  Gene being Gene he added female vocals for the background and those females are none other than Katey Sagal, Fran Segall and Carolyn Ray who have all been The Vault songs earlier in the series.  The guitar solo was played by Binky Philips of the band The Planets.  It is a fun song and you feel like you’ve heard it before as it sounds so familiar.  The chorus is repeated too many times, but overall it rocks out. (GRADE 4) 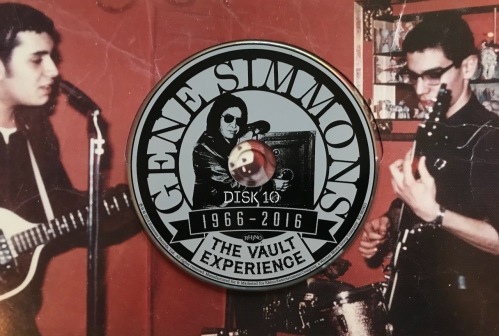 “I AIN’T COMING BACK”

Here is the second error on this disk.  This song is a repeat of the same song that is sitting on Disk 7.  Even what is written in the book is the exact same thing.  But for a reminder…this is the second version of “Never Gonna Leave You” only without the “Never Gonna Leave You” part.  More bass heavy yet still the R&B, Motown feel.  The song is a little longer than the prior version.  Otherwise not much difference. (GRADE 2)

This was written by Gene and is freaking heavy.  It was recorded around 1994 and sounds like something for ‘Carnival Souls’ but sounds more ‘Revenge’ heavy and not ‘Carnival’ heavy if that makes sense even though the guitar is a little grungy.  The song title is taken from a cool store back in the 70’s where the band shopped for their glam clothes.  It is supposed to be Led Zeppelin influenced, but not hearing it.  All I know is there is something there that could be developed further.  It is a beast even for a little rough sounding.  (GRADE 4)

“PIECE OF THE ROCK”

Written by Gene and Robert Fleischman (Vinnie Vincent Invasion) back in the early 2000’s.  The recording is poor, but the point is clear.  There is a cool riff and nice groove and it should be developed further.  Both Gene and Robert are harmonizing on it and I don’t really have a list of players so will assume it is mostly Gene.  In the current state it is only average, but the chord pattern and chorus could be turned in to something.  (GRADE 3)

Gene wrote this and recorded in 1987 and when you hear it think Fine Young Cannibals because that is what he based it off…really…not kidding.  It sounds like English pop of that time with electronic drum sounds and not something you would expect from Gene during this time period.  I like the fact it sounds like it does, but the lyrics kind of suck and not something Kiss would ever do.  Thank god!! But sadly still a little cool.  (GRADE 2)

Written by Gene around 1993 or 1994 and this version has no lyrics.  Gene scats a little at the beginning but truly not needed.  Musically, this is a killer song.  Gene says he was going for a reggae, Bo Didley and Johnny Otis feel and he might have hit all those marks.  It is so catchy and fun and my favorite on this disk.  It rocks out, it is playful, it is a blast.  Man, this thing needs some lyrics badly especially around “Sticky Goo” as that works for this song.  (GRADE 5)

“AND LOVE CAME TO ME”

Written by Gene and has Gene on all the instruments.  This was recorded in the late 70’s as it is Gene’s attempt at disco or something close to that.  The band hated it and I can see why.  I love the Vault’s description that it is Gene doing Paul McCartney doing disco and that sums it up better than I could. Avoid this one (not completely as you have to listen to everything on hear).  (GRADE 1)

This is the demo of “Journey of 1,000 Years” off ‘Psycho Circus’ and is brilliant.  It is written by Gene and recorded some time around ‘Psycho Circus’ so around 1996-1997 probably.  It is Gene, Eric and Tommy on the song it has most of the elements of the final version only with a slightly different chorus thus the name of the track.  This version is pieced together with the chord structure coming from “You’re My Reason For Living” and guitar riff is inspired by the Beatles “I Want You (She’s so Heavy)”.  This is a much more darker, menacing version. I love the title “Roar of the Greasepaint” as it fits the masked band so well. It is just bad ass.  (GRADE 5)

For an album I had a hard time getting in to, I ended up liking it more than I thought. The average score comes to 3.3 out 5.0. When I sat with the headphones and absorb it all in and took the time to really listen, I started hearing things I liked and it stuck with more.  It also helped that there were a smattering of 4’s and 5’s to take it up a notch as there are still some songs to struggle through.  This one paid off in the end.  But there is also a sadness with this one. I only have one more disk to go.