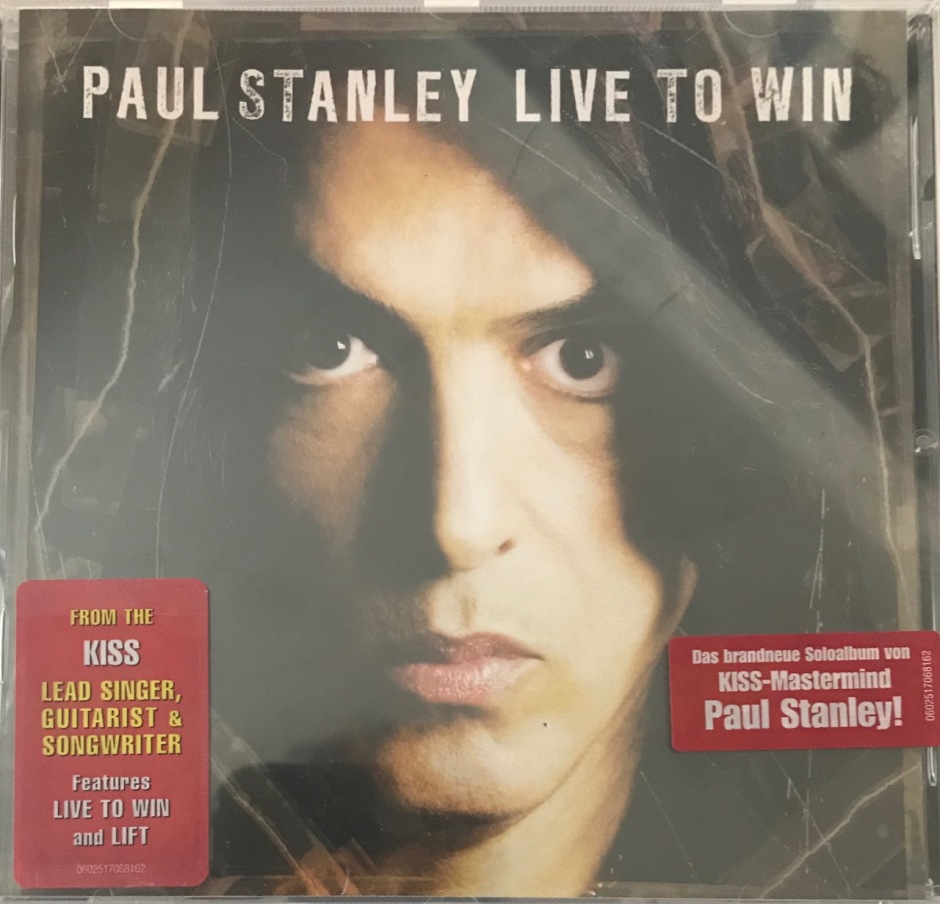 We are now in to 2006 and Kiss hasn’t put out a studio album in 8 years. 8 YEARS!!! That is insane. I figure Paul was getting a little restless and decided it was time for the follow-up to the 1978 first solo album. Heck, Gene finally did a solo album back a few years, so why not Paul. ‘Live to Win’ was finished and released on October 24, 2006 and yes, I was a release day buyer for this one. Come on, its Paul, why would I not be.

Paul brought in a lot of people to help with this album and the usual suspects are there including his long time collaborator, Desmond Child. We also see Marti Frederiksen, Holly Knight and even John 5 plus a few other writers. I believe there is only one song Paul wrote by himself. As far as musicians on the album, you do get John 5 on a couple and you get Kiss alum Bruce Kulick on bass…wait…what??? Bruce on bass? I’m sorry, Bruce is a bad ass guitar player, why is he mitigated to only the bass. Seems like a waste. And lastly, I noticed Tommy Denander who has played on it seems hundreds of albums. The rest of the musicians I am going to guess are studio guys and all very talented because all studio musicians are amazing.

The album opens very bombastically with “Live to Win” and immediately you see this is the Paul you expect. It sounds like Kiss, but a modern rock version of the band. This is a very uplifting track and very inspirational. It feels current and today (today for 2006). The drumming on this was solid and the guitar work was on point as well. Paul’s vocals are spot on and I don’t know if he’s sound better. Paul knows how to kick off an album and “Live to Win” is the perfect way to start. Paul wrote this with Desmond and Andreas Carlsson and it is a heavier rocker than I would’ve expected from these writers. Andreas has written for a lot of boy bands and pop music so this was as surprise.

“Lift” is up next and Paul keeps it heavy and an even more modern sound. A darker edge to this one, a lot of darker toned keyboards and the lyrics seem to match the vibe. With Marti Frederiksen co-writing, they deliver another solid, melodic track with a little more power to it. This a very mature Paul on this song and a nice side to see.

“Wake Up Screaming” starts off with a some horrible electronic drums and I mean horrible. Another Stanley, Child, Carlsson track and this is more what I would expect from them. A little more generic sounding although I like it somewhat despite the lack of significant guitar work and that horrible drum. It is a catchy enough that it is tolerable, but barely.

Then we get to Paul’s first of 3 ballads (ooh, 3, really). This one is called “Everytime I See You Around” and when I heard it I thought it was written by Paul and Desmond, but nope. It is Paul and Pete Masitti who I am not familiar with. I was immediately taken back to the song “Hide Your Heart” off ‘Hot in the Shade’ and I could almost taste the vomit in my mouth as I hate that song so much. So, of course, I now hate this one. It is beyond bad. The only interesting thing on here is David Campbell composes some string arrangements for the song. David worked with Kiss on the ‘Kiss Symphony: Alive IV’ album.

We are back to the rockers with “Bulletproof” and this time it is just Paul and Andreas as writers. It is has classic Kiss feel in its delivery. Some great backing vocals on the chorus and John 5 on guitar and he lays down a great solo. Paul sounds really great and might be one of his better performances on the album. This is a sleeper hit for me as it could’ve been on any 80’s album.

“All About You” feels more like an 80’s new wave / rocker track as there is some electronic elements, but full of that 80’s rock cheese. It is another throwback to an era I loved with Paul killing it vocally and more solid guitar work by Brad Fernquist. This is starting to feel like Paul should’ve put this out in the 80’s instead of Kiss album and it would’ve done great.

Paul’s second ballad is “Second to None” and…oh…my…god…please shoot me now. I liked Paul’s 80’s ballads as they were a little cheesy but still fun, but I can’t take this. Ballads are so overdone by now and this isn’t anything worth listening to in the least. The only thing interesting is the guitar solo by Brad. Enough said. I will spare you any more gory details.

Luckily we are back to the rockers with “It’s Not Me” and this one was written by Paul, Holly Night (Hide Your Heart fame) and Charlie Midnight. This one also brings back a more modern rock sound and is a sensational track. Brad lays down another great guitar solo albeit way too short and Paul is still bringing the heat vocally. Need more like this one.

Now back to the ballads with “Loving You Without You Now” and thank god this is the last one or I might jump out my first floor window and sprang an ankle. This one was written solely by Paul and I had hoped not having an outside influence would help, but it really doesn’t. It is another generic leftover from the 80’s that borders on Neil Diamond, but in a bad way. Now, that title, if he is loving her without her now, what is he doing…WAIT…I don’t want to know!

And now we come to the end with the final track, “Where Angels Dare” and this one was written by Paul, Desmond and the great John 5. I thought this might be a little darker with John 5, but it is a little poppier heavy rock song almost like Bon Jovi before they sucked. John 5 does lay down a cool riff and a great solo, the keyboards are used to enhance the sound and the drums are heavier. Paul continues to sound great and goes out with a bang.

The Track Score is 6.5 out of 10 or 65% which lets you know, this is not as good as his 1978 solo album, but I do enjoy this one. I know I am probably in the minority with this one, but that is okay. I thought Paul sounded great and the best he’s sounded in awhile. The songs, although some sounded like 80’s leftovers, there was still a more modern rock sound to a lot of the tracks which shows that he can still change and adapt to the times. I do wish there were fewer ballads, wait, these ballads were awful, so I wish there were no ballads and just did all rockers. I would’ve been fine with that. I am going to score it a 3.75 out of 5.0 Stars as it wasn’t quite good enough for a 4.0, but better than a 3.5 so we met in the middle.

This brings us to the end of the Side Projects in the Kiss Review Series. We have covered a side project from every band member now. The rest of the series is all Kiss!!