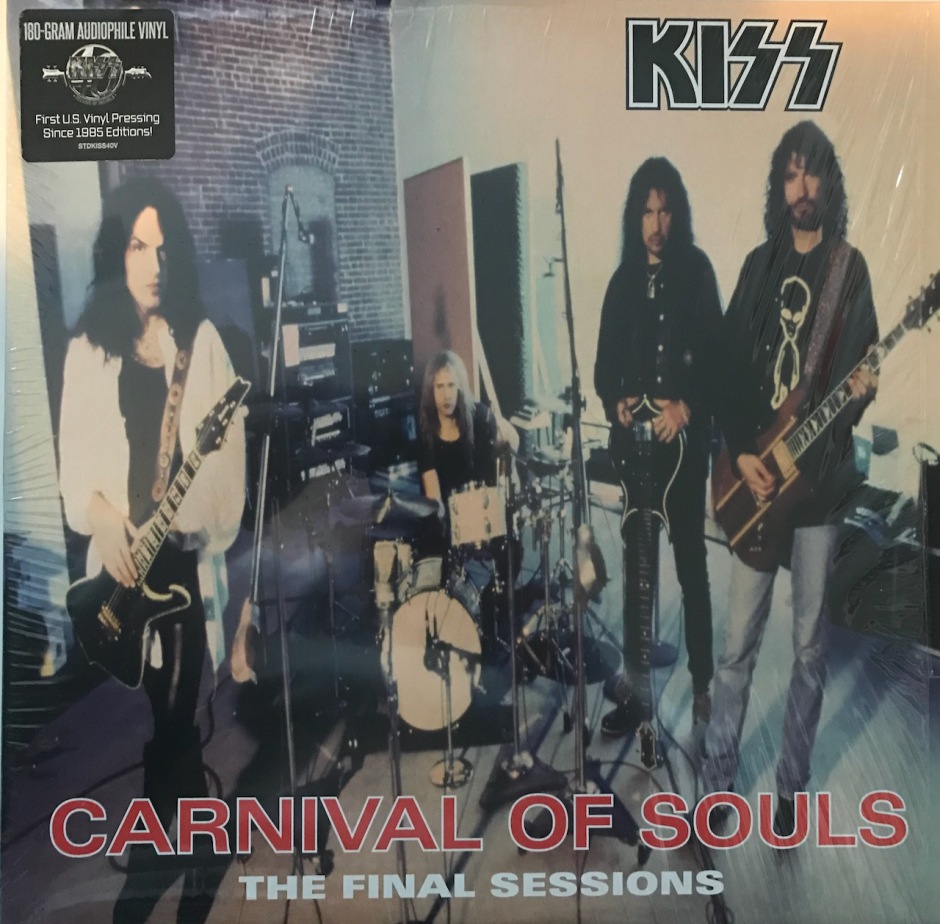 Shortly after the MTV Unplugged Show, the current line-up of the band, Gene Simmons, Paul Stanley, Bruce Kulick and Eric Singer, went back in to the studio to record what would become the band’s 17th studio album. The album was recorded between November 1995 and February 1996, however, the album was scrapped and pushed aside. Why would they do such a thing, was it that bad? No, not exactly. The problem was that after the MTV Unplugged Show, the buzz about the Ace Frehley and Peter Criss playing with the band again was reaching a fever pitch. Would they get back together and do a reunion tour? Would they put the make-up back on? And the answer to both of those questions was a resounding, YES!!

The album was set aside for the time being. Somehow though, bootleg copies of the album got out and were being distributed around in certain circles (I wasn’t in that certain circle). As a result, the band decided to finally release the album and they called it ‘Carnival of Souls: The Final Sessions’. It actually didn’t have all the same songs as the bootleg, but at least it was out.

The album was a complete departure for the band. It saw them go darker and more grunge because as usual, the band were followers and trying to follow the trend. They didn’t care in the least anymore to be trend setters and set the bar high. Nope, they pandered to what was big in music. There is a problem with that as Grunge was fading by this time. A lot of the sound was actually a result of Bruce Kulick’s doing as he helped co-write 9 of the 12 songs. I am not saying it is his fault, I am only saying that it was because of Bruce they were able to do that sound as he was versatile enough and technically savy enough to play anything.

The album did not do well, at all. It has been lauded as possibly one of the worst albums they have done. It never went Gold, it never charted on the Billboard 200 albums chart, there was only one single and it didn’t do that well. The album was not received well by the public. It would also turn out to be the last studio album featuring Bruce Kulick and the last Non-Make Up era albums. That is right, the make-up came back on and has never come off again.

Is it the band’s worst album? I don’t know, you will have to be the judge of that thought. I will let you know what I think about it and we will see where it falls at the album rankings when this series is over in a few months.

The opening track was a song called “Hate” which was written by Gene, Bruce and Scott Van Zen. It is a pretty dark and heavy song and could quite possibly be the heaviest song they have ever done. It is the second time they have led with a Gene song and it works really well. I love the distorted guitar sounds, the heavy drums and the wicked bass line. This feels like a grittier “Unholy” and you know, I am okay with that. The original demo of this is on Gene Simmons ‘The Vault’ on Disk 2. That version is even more raw and rough and just as good.

Paul is up next with “Rain” written by Paul with Curtis Coumo and of course Bruce. It is another heavy song and for Paul, that is not usually a thing. It is a little moody and foreboding sound. Paul is not really singing all out like he normally does. He is more deliberate and even a little lacking in feeling. It is Soundgarden lite, but without the wickedly good Chris Cornell vocals. But I actually like the song and think it was one of his better songs on the album. I’m not hating things at this point.

Then Paul is back again with “Master & Slave”. Gene’s bass on this is slick and groovetastic. It is the driving force to the song. The song might be my favorite Paul performance on the whole album. He seems to be in to this song a lot more and the driving beat of the song is a little more upbeat despite the subject matter. The Bruce solo is so distorted and dirty that it stands out and really takes the song to the next level. Everyone killed it on this album especially Paul’s scream towards the end of the song.

Next up is “Childhood’s End” which was written by Gene, Bruce and Tommy Thayer. Gene takes on vocals for this one and it is more of a ballad. It is clunky, Gene sounds horrible and this is a big pile of a flaming turd for me. If you want to a much more palatable version of the song, got to Disk 3 of Gene Simmons ‘The Vault’ and you will get a more raw, rocking version of the song with the 1993 demo.

Paul, Curtis and Bruce bring us the next track, “I Will Be There” which is a ballad about Paul’s son Evan. The only song Paul says he felt a connection to which makes sense as it is more personal for him. The song is acoustic and has Bruce playing bass rather than Gene. It is the least grungy song on the album and musically sounds nice and is a touching song, but it feels like it is trying to go somewhere yet never reaches that destination.

The final track on Side A is the only single off the album, “Jungle”. The same trio that wrote the last song wrote this one as well. The bass riff on this one is killer which is played by Bruce which was accompanied by Eric’s powerful drum beat. And to top it off, Bruce also laid down a great solo for this too. It is a more upbeat track and a little more radio friendly then the rest which is probably why it was the single. The song goes on for over 6 minutes which is long for Kiss. There is a cool instrumental ending that goes on for awhile with Bruce throwing in all sorts of riffs and notes with Eric keeping pace. I actually enjoy this one a lot, not as much as “Master & Slave”, but it is another favorite of mine. The song did got to #8 on the Mainstream Rock Track charts in the U.S., so at least it got played a little.

Gene kicks off Side B as well with the song “In My Head” which is another dark, brooding song. The song was written by Gene, Scott and Jamie St. James from the band Black & Blue. Again, Kiss is really highlighting the heavy bass riffs. They seem to feel that is what Grunge songs are all about as I don’t think the bass has ever been this heavy on any other album. Gene does a good job with the vocals and the guitars are real crunchy, but I am little bored with it. There is no real chorus, or at least a catchy chorus and I would only keep if for the music, not for the singing. The demo is on Disk 1 of ‘The Vault’.

“It Never Goes away” has Paul back on vocals. Musically you would think it is a Gene track with how heavy it is, but its Paul’s. The song is too long at over 5 minutes as Paul sounds so bored singing. No heart or connection to the lyrics at all. If there was a picture of “Filler” in the dictionary, it would be of this song.

“Seduction of the Innocent” is another Gene track and this one has some heavy Beatles influences to it. It is a little more laid back, they laid off the heavy bass with this one. It is a pleasant sounding song and Gene gives a softer vocal performance and doesn’t over sing. There is some more awesome playing by Bruce that gives the song a boost towards the end. One of the better songs on Side B. Now, there is a demo on Disk 7 of the ‘The Vault’ that is a lot more rocking and raw, but not as good as this one.

Then we get the final Gene song with “I Confess” written by Gene and Ken Tamplin. It has a whole ‘Music From the Elder’ vibe even though it was written in the 90’s. It is another filler track as there isn’t really anything interesting going on with it. It has no real direction. The demo for this is on Disk 1 of ‘The Vault’ and I didn’t like that version much either.

The final Paul track on the album is “In the Mirror” and another boring track. I have to say the second half of this album is pretty bad compared to the first half which is quite good. I don’t really have anything good to say about this one, so I won’t say anything else.

The final track on here is a band first. It is the first song that is sung by Bruce Kulick. Sadly, it is also the last since this was his last album with the band. “I Walk Alone” has Bruce singing, playing lead guitar and playing bass. I guess Eric wouldn’t let him play the drums. Now Bruce isn’t the best singer, but the song is pretty good. I enjoy it at least. I feel this is a less grunge sounding song and more a straight up rocker. A good beat, a decent chorus and overall solid track. I think I like the novelty of it that Bruce is actually getting to sing.

The Track Score is 6.5 out of 12 songs or 54%. I will be honest, I liked more tracks than I remembered as I hadn’t listened to this in a while. But let’s also be honest with that fact even if there are some tracks I like, this is still a horrid album. Kiss is not grunge, ever!! To make an album that follows the trend is always a recipe for disaster and that is what this is. I think I can only give this album a 2.0 out of 5.0 Stars which is 1 star more than I expected from what I remembered. If I spent another week or two with it, maybe I could get up to a 2.5, but for now, the 2.0 is the best I can do. The first half of the album is pretty good, but the back half is awful. The only cool thing about it is that so many demos of this album were on ‘The Vault’ and which was so much fun to explore.