On February 18, 1974, the world received their first Kiss album, simply called ‘Kiss’.  But not many people took notice. It only sold around 70,000 copies at the time and quickly faded into existence.  But hold on, before we get in to the album, let’s go back to the first Kiss show one year earlier on January 30th, 1973.  For that show, the band didn’t really wear any make-up.  They had their name, but were just setting out and didn’t know who they were yet. They had the drag/glam look going for them, but the make-up progressed rather quickly.  Each member was discovering their personalities….The Demon (Gene), The Starchild (Paul), The Spaceman (Ace) and the Catman (Peter).  Over the next year, they would settle on who they were and so much more.  And who were they?  They were the following:

In early March, the band would finally decide on the make-up, then about a week later, they entered The Daisy in Amityville, NY with famed Led Zeppelin producer and recorded a five song demo.  The same 5 songs we talked about briefly on the Wicked Lester demo album from last week.

Then shortly after that, they were doing a showcase in the Summer and they meet a lad named Bill Aucoin who would become their manager and change their life forever.  But before they signed with Bill, they said he had 2 weeks to get them a record deal.  Not much time for anyone, but for Bill, he made it work.  The band would be the first band to sign with Neil Bogart’s Casablanca Record label on November 1st, 1973.  Quite a busy year.  And yes, I skipped so much, but this isn’t a history lesson, this is an album review.  So why don’t we get to that part now.

When the band went in to the studio on October 10th to work on their album, they already had the songs written (well, all but one) and were ready to go.  They recorded the album at Bell Sound Studios in New York City and had hoped that Eddie Kramer would produce the album for them, but that wasn’t in the cards.  Instead, they got Kenny Kerner and Richie Wise.  They were capable, but they never got the sound of the band to match of their live performances much to the detriment of sales.  The Eddie Kramer demos had the banding sounding more raw and would’ve been a better choice, but nothing we can do about that now.

The album cover is simple but effective.  The band members, in full make-up, sitting together against a black backdrop.  The inspiration is easily recognizable as it is simiar to the cover of The Beatles’ album ‘With the Beatles’ whom Gene is a massive fan and was inspired by them greatly (just listen to the Vault and you will hear what I mean).  And that cover will grab you.  I can only imagine back in 1974 and coming up and seeing that cover and wondering who the fuck these guys were.

Now, it is time to go through the music.  The original album released only had 9 songs and someday I will get a copy of that one.  It was a re-released version a few months after the original where Neil Bogart wanted to add a 10th track and we will talk about that shortly, but for now, let’s get started.

The album kicks off with the song “Strutter”.  The song was written by both Paul Stanley and Gene Simmons and over the years, this would be a rare experience as they would wind up writing songs by themselves.  The music of the song was based off an old Gene song called “Stanley the Parrot” which was recorded even before there was a Wicked Lester.  The song has a great opening drum fill by Peter and is an uptempo rock song that was inspired by all the sexy women in New York.  There is a great bass riff by Gene why Ace belts out the solo. Paul sings the song and shows all the confidence a lead singer should show.

The opening guitar notes make this instantly recognizable and then the “Wooh Whoo Yeah”, you get the slow grooving “Firehouse” with a fierce and menacing bassline.  The song was famous for when Gene would breathe fire in their live shows.  This song was written by Paul way back in High School and he does the lead vocals as well with Gene accompanying on the chorus.  At the end of the song is the roar of the siren which was played by Warren Dewey and you can’t have this song without the siren.

Then the band goes full on rock with the incredible guitar riff by Ace on “Cold Gin”. The song is written by Ace, but his confidence in singing wouldn’t come for years so Gene would take the vocals.  It is one of my favorite songs on the album and the riff played throughout is so freaking awesome.  It is very ironic that Gene sings this song as now we know Gene doesn’t drink or do drugs, but it sounds like a Demon song so it fits perfectly with his personae.

The final song on Side One is “Let Me Know” which was written by Paul Stanley and originally called “Sunday Driver”.  Paul and Gene share the vocals and I have to admit, it is not the most memorable song on the album until you get to the little harmony bit towards the end.  At that point, the song kicks some ass with a cool little instrumental piece that take the song to its end.

Now the version I actually have is the one with this next song that kicks off Side Two.  The song is a cover of the Bobby Rydell Song “Kissin’ Time” written by Kal Mann and Bernie Lowe.  It was recorded two months after the release and added a couple months after that to the album.  The band was not happy about this at all, but they were pressured into recording it.  Paul, Gene and Peter all sang on the song and it is just a shit song.  It has that whole 50’s, early 60’s style and is not a wrong song.  It is easy to hear that they didn’t want to be there singing this crap and that is why I want the original version so I don’t have to hear that song anymore.

Side Two originally kicked off with one of the most famous Kiss songs, “Deuce”.  “Deuce” was written and sung by Gene and he doesn’t even know what the song actually means.  He just thought it sounded good…and he was right.  The opening line, “Get Up and get your Grandma out of here” is the best opening line.  This is one of those songs that live sounds so much cooler and has more grit, but this is still awesome.  The guitar playing is fantastic and Ace plays a killer solo to end the song.  Peter lays down some nice fills and gives the song a great fast tempo beat that drives the song along.

Next up is an instrumental only track that actually has writing credits for all the members which I am not sure that has happened since.  It is taken from a song called “Acrobat” they used to play in the clubs and it is now called “Love Theme from Kiss”.  It is really a simple instrumental and is a little repetitive.  I’m guessing it was filler as they must not have had enough songs.  Gene does play the hell out of the bass though.  Overall, a skippable song.

Then we get another Gene and Paul penned song called “100,000 Years”.  Gene had the idea from reading a bunch of scientific books including one called “100,000 Years”. It starts off with Gene’s badass bass riff and then kicks in to full band mode with Paul on vocals and the song maintains a pretty cool groove.  This is one that Peter shines on and live, watch out, Peter kills it.  But this is the studio track, so we will stick with that.

Lastly, the album ends with one of the band’s best songs, “Black Diamond”.  The song was written by Paul and he does sing on it, but is mostly sung by Peter.  The songs starts off with a 12-string acoustic guitar and Paul sings the opening line and when he screams “Hit It!”, the song turns in to a blistering rock song with Peter taking over vocals. The song was written about New York and those ladies working on the street that they would fantasize about.  Peter’s gravelly vocals gave the song such a powerful edge and he put so much heart and soul in to those vocals.  Towards the end of the song, there is a brief musical interlude with Ace tearing it up on guitar and Peter laying down some fills all accompanied by that nasty bass riff from Gene before Peter lays down a final barrage of drum fills and then the song slowly, distortedly comes winding down to an end.  It is dark and foreboding and so metal.

Now, for extra bonus picture here is a label with “Kissin’ Time” included for good measure. 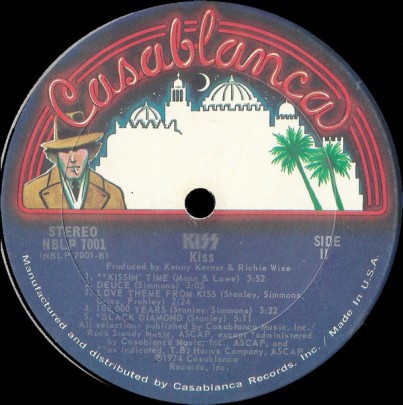 The track score is 8 out of 10 tracks that are keepers or 80%.  Solid score to start off the studio albums with.  The song “Kissin’ Time” should’ve never been added.  Total mistake in my opinion.

A lot has been said about how the sound on this album is awful.  And it is really not that bad.  The songs are still amazing songs and look how many songs on this album are considered Classic Kiss songs and are still played live today.  This is nothing short of brilliant in my book and says a lot about the quality of the songs.  Kiss wouldn’t have been around for almost 50 years if they didn’t have the songs.  When you look at it based on the songs only, this is a 4.25 out of 5.0 Stars easily in my book.  Take those two songs off I don’t like and it is a perfect 5.0, but that is not the case.