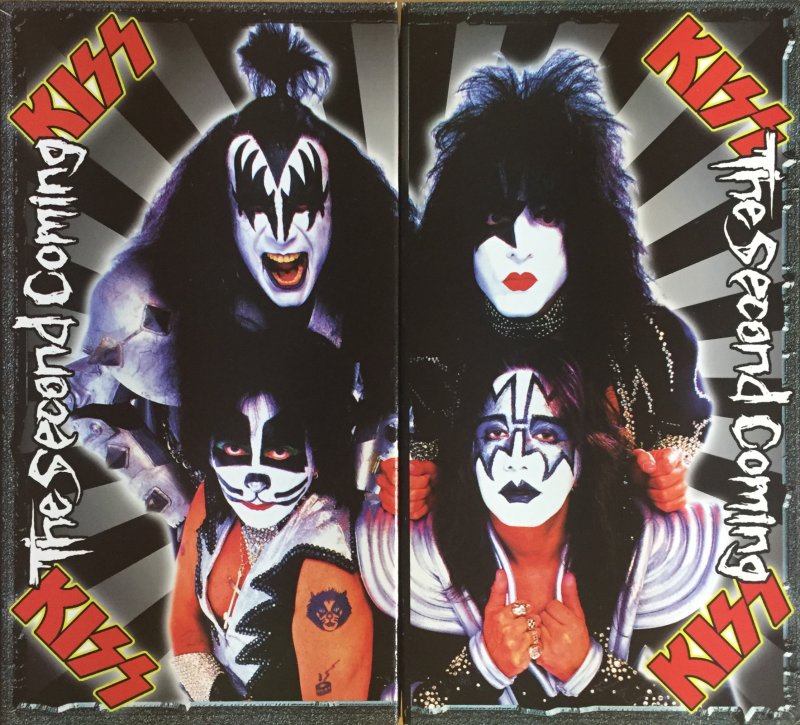 Only 2 months after Kiss released their reunion album, ‘Psycho Circus’, the band released another video. This one consisted of 2 VHS Tapes called ‘The Second Coming’. This isn’t a concert video, but instead what we get is a documentary that documents the band’s reunion with Ace and Peter and the subsequent Alive/Worldwide Tour from 96-97. The video was released on November 24, 1998 and the sales were really great as it went Platinum.

It starts off sounding like a VH1 Behind the Music TV show as they quickly go through the band’s make-up history and the first departure of Peter and Ace. This part takes only about 15 minutes and when I say it is high level, that is an understatement. This is an extremely short version of Cliffs Notes Kisstory. The good news is that leaves the remaining 2 hours left to discuss when Peter and Ace start getting back in the good graces of Gene and Paul starting with the Kiss Conventions and going through the end of the Alive/Worldwide Tour a few short years later.

Before we get in to some of the detail of the video, let’s first talk about a future Kiss connection with this video. The Director and Producer of the video is future Kiss’ own Tommy Thayer. That is right, before he became the Spaceman in Kiss, he was brought on board as basically a historian for the band.

Now on to the video. Once you get past the Cliffs Notes version of the band, it slows things down once they get to the Kiss Conventions and they discuss how the band was doing the acoustic performances at the convention. At one of the stops, Peter Criss brought his daughter so she could see what her Father had been a part of. The band brought up Peter to perform “Beth”. These acoustic performances caught the attention of MTV and asked Kiss if they would do an MTV Unplugged which leads to reaching out to Peter and even Ace if they want to come play. And they did just that.

The great thing about the video are all the behind the scenes footage to a lot of these events. The best part of it is how much Peter is a joker and at the same time a complainer. He is always running his mouth and giving Gene a hard time. This little nuggets are some of the funniest moments on the disc. If that is enough, when they show a lot of Kiss interviews, always listen to this sexual puns/innuendos Paul has in every freaking answer he gives. Sometimes there are so, so bad but awesome too.

After the Kiss Unplugged, the band started to seriously think about doing a Reunion Tour and this video shows a lot of the behind the scenes on what it took to get this Tour in to shape.You get insight to how the band came up with the stage, how much they rehearsed and all the work it took to get it up and running. The rest of the show talks about all the different stops on the Tours and all the special moments like selling out 4 nights at Madison Square Garden, the Japanese leg of the Tour, The Australian leg and most of the time is spent on the US legs of the tour.

One cool thing you find out is that all the promoters in each city had to dress up as Kiss if they wanted the band to come to their town. This was something Doc McGhee started and the promoters ended up loving it and you get to see a lot of the pictures/videos of the outfits and some are pretty elaborate. Hell, even Doc dressed up once as well.

All-in-all it is a real detailed trek through a few short years. They don’t go into Psycho Circus which is probably on purpose since Ace and Peter didn’t really participate much at all on that album. The video highlights a lot of the good times and doesn’t focus on the negative which I am sure there were as there is always when these guys get together. I found it enjoyable and the real intimate behind the scenes moments were great to see. I liked seeing those moments that made them more human, however. it is still not something I will watch again, probably. I am more interested in a full band documentary than this short period of the band. I would give it a 3.0 out of 5.0 Stars as it is better than average but not completely outstanding.