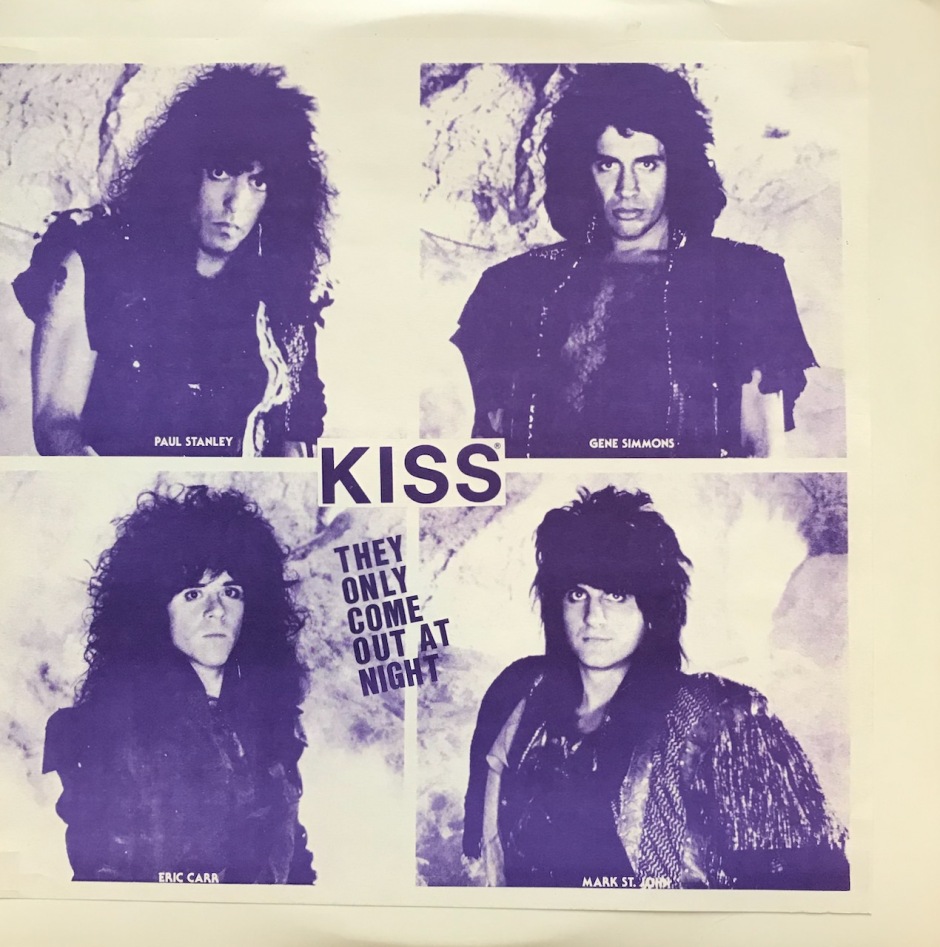 In my quest for collecting Kiss Bootlegs for eery tour they have done, I found another fantastic addition to the collection.  My local record shop, Hardy Boy Records, has been a goldmine of late for Bootlegs. I have now bought four over the last few months and all for tours I didn’t have (or a collection of Wicked Lester demos – that is another story that will be told later).

The last 2 I bought were actually the same store, so I guess that statement was entirely true.  The difference was one was the North American Tour setlist (which will come in the next week or two) and this one is the European leg of that tour with an ever so slightly different setlist.

Before we get to the show and the music, let’s discuss the cover of the album.  This album is listed as “For Promotional Use Only” and is a really cheap production.  The album jacket is plain white cover with this paper picture of the band that wraps around the back. It is glued down and not going anywhere.  But the strange thing is the people on the cover.  Now, I get it this the Animalize Tour so you would expect Mark St. John to be on the cover, but there is a problem.  This is not one of the 3 shows that Mark actually played on.  This has Bruce Kulick playing before he was an official member which would come about two months later.

The show is from October 26, 1984 at the Johanneshov Isstadion in Stockholm, Sweden on the first leg of the tour.  The recording if an audience recording actually sounds quite excellent.  Not much crowd noise and everyone sounds pretty clear with minor instances where the sound was off a little.  This was released a year later in 1985 by a group called Poverty Records at least that’s what it says on the album itself.

There is another version of this floating around that isn’t a promotional copy and has a more professional look to it.  It even includes a 12 page booklet.  The cover is below.

The best thing about this album is not the music.  NO!  You would think that would be what I like most about it, but it is not. The best thing is the labels on the vinyl.  They are for an album called Buddy Love – ‘Sings About Girls’.  And that isn’t the best part.  It is the song titles.  My favorites are as follows:

All totally awesome.  Both vinyl have the same labels but only different colored labels. 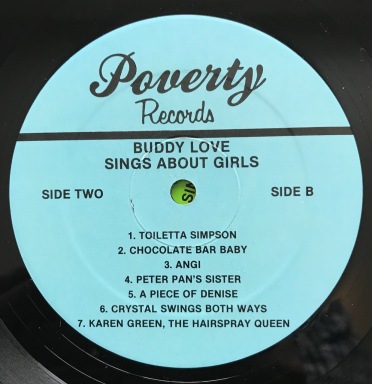 The album kicks off with “Detroit Rock City” as they often did and the best thing about this is you actually get Gene singing part of this Paul Stanley song.  Why is that you ask?  Well because Paul fell down not once, but twice during the song and Gene had to pick up the vocals while Paul picked himself up. It is one of the roughest openings I’ve heard by the band and so cool to have this screw-up immortalized on vinyl.

The opening three tracks are classic Kiss songs including “Strutter” which I love and then we get an 80’s onslaught of great tunes kicking off with Gene and “Fits Like a Glove” and then “Heaven’s on Fire”.  I would love a whole Kiss show of nothing but 80’s tunes.  Or at least Bruce going out and touring with that material!!  Off topic sorry, the first side started off rough, but made it up by the end into a great set of songs.

Side two is all 80’s plus a couple of solos…one with guitar and one with Eric on drums plus Eric singing “Young & Wasted” which is so awesome he was handed the vocals for that one.  One thing I’ve noticed is how little Paul speaks.  He does do some of the same spills, but they aren’t as long as in the U.S. and much cleaner.  All-in-all, the first LP was pure gold and historical with Gene taking over on Detroit! 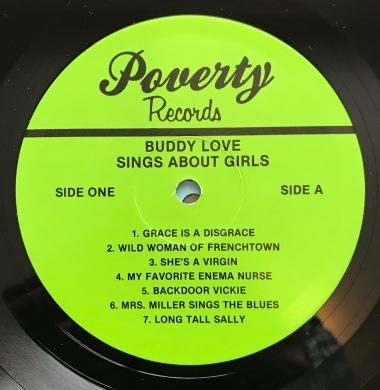 The second LP gives you the last few songs of the show as well as the encore.  It list the bass solo as a track which isn’t really on it or it was so short I didn’t notice it. The prize on this set is that this one has “I’ve Had Enough” on it from Animalize. The other Animalize set I have has “Under the Gun” instead.

One thing I really like about this setlist is that the main show actually ends with “Rock & Roll All Nite” and not the Encore like the other set has.  Now that is fine by me as I’m tired of that song anyway.  The encore is “Lick it Up” and ends with “Black Diamond” which is one of my all-time favorite Kiss songs even though on here it was a little less bombastic from say the Alive! era.  In between “Lick It Up” and “Black Diamond”, they played “Country Man” and “Winchester Cathedral” which is different than the US show as that one played “Oh Susanna”.  I think I preferred this one much more.

And there you have it.  Another fantastic show and I’m so excited as the duds I have picked up have been very limited.  Paul sounded great, his stories weren’t as vulgar as they were in the States, but still entertaining as hell.  I would give this one a 4.5 out of 5.0 Stars as well as the quality is fantastic and those labels were hilarious.  That made the purchase so worth while.