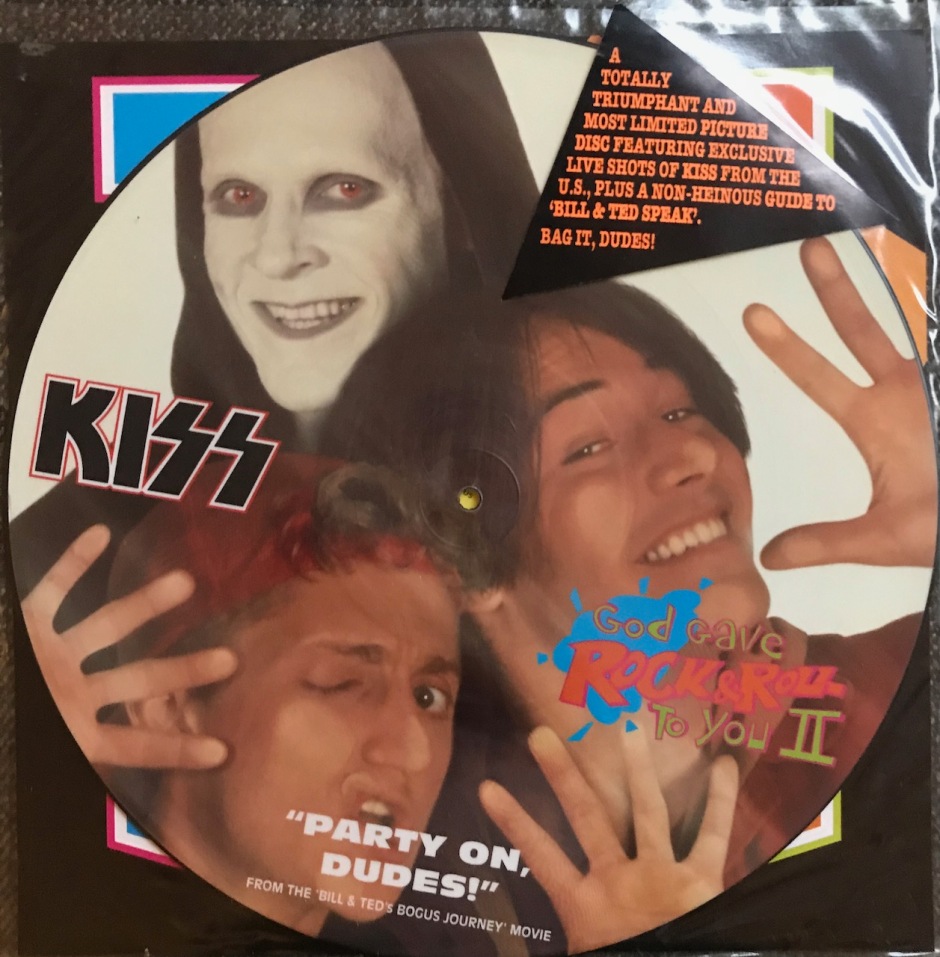 Prior to the release of their next studio album, Kiss was asked to due a song for a movie. That movie was Bill & Ted’s Bogus Journey. Yes, one of cinema’s finest movies, I know. The song was a cover of “God Gave Rock And Roll To You” by the band Argent, but the lyrics were changed up so much, they added the “II” at the end to signify it was a little different than the original. So that meant, not only was Russ Ballard’s name on the credits, it now had Gene Simmons, Paul Stanley and producer Bob Ezrin who the band was working with at the time for the new album. The single was released on August 22, 1991.

What was special about this song and release is that is the last Kiss single to feature Eric Carr. Eric wasn’t healthy enough to do the drums at the time, but he is featured in the background vocals. And luckily he was healthy enough to be in the video. Eric was extremely ill as he had been diagnosed with heart cancer. He had become so ill, he was no longer able to play, so the drum work on the song was handled by Eric Singer, who also did the drum work on the band’s next album, ‘Revenge’. Eric Carr made his last public appearance with the band shortly after the video at the MTV Musis Awards in September 1991. Shortly thereafter, Carr suffered an aneurysm then a brain hemorrhage and never regained consciousness. He later died on November 24, 1991 which was sadly, the same day Freddie Mercury of Queen had died and that overshadowed his death.

The picture disc of this release is really awesome. I do love the picture of Bill & Ted with Death on the A-Side. That alone is worth getting this release. What is also cool is the insert has “A Non-Bogus Guide To A Whole New Language”. Basically it tells you what each of the stupid Bill & Ted quotes in the movie mean. It is just as stupid as the movie and yet most excellent dudes!!

The song “God Gave Rock And Roll To You II” is the first time since the song “I” from Music From the Elder that both Gene and Paul actually shared lead vocals. That is 10 years and way too long of a gap. It is a pure rock anthem. It isn’t as heavy and bombastic as “Shout it Out Loud” or “Rock And Roll All Nite”, but it has it heavier moments. It has more of nostalgic feel to it thus the Kiss version of the video has old clips of the band to give a shout out to the band’s history. The video below is the movie version. There is a point where Paul speaks and preaches his rock & roll faith. Kinda corny, kinda cool. The band still plays it today, but usually at the end of the show as the crowd is leaving…so not a live performance, but still at least they play it even if it is the recorded version some times.

Now of note on the “God Gave Rock & Roll To You II”, the version in the movie is different as it has about a 40 second guitar solo that was done by none other than the great Steve Vai. Too bad this didn’t have that version!!

Next up is the B-Side. This side is full of Kiss pictures and is a cool looking picture. However, the B-Sde doesn’t feature Kiss at all. Instead it includes two other songs from the ‘Bill & Ted’s Bogus Journey’ Soundtrack. The first track is from King’s X called “Juniors Gone Wild” which is featured in the scene when the Evil Bill & Ted still the Porsche. The song is playing the on stereo. The Song is quite Triumphant.

The next track was by Slaughter and it was called “Shout It Out”, but it wasn’t a cover of “Shout it Out Loud” by Kiss unfortunately. This one was played in the scene where Evil Bill & Ted were trashing the Good Bill & Ted’s apartment. If you know the band Slaughter, then you know what this sounds like. This would’ve fit nicely on either of their first two bells. Plus, the song has a lot of cowbell and you can never have too much cowbell. Out of the three songs, this was the only one to reference anything from the movie which definitely dates the track, which sounding like early 90’s Slaughter doesn’t date it on its own. Still an Outstanding track.

And that is the 12″ Picture Disc. I love collecting the singles when I can find them and to get a picture disc is quite Righteous…wait, I think that is Teenage Mutant Ninja Turtles and not Bill & Ted. I have to say this was very good…oh sorry…Most Excellent! Go forth and Be Excellent to Each Other!! Oh yeah…Party On Dudes!!

Aerosmith’s ‘Classics Live! II’ album review is up now at 2loud2oldmusic.com. Go check it out!
You Picked It! The review you wanted me to do is up now at 2loud2oldmusic.com. Queensryche’s Rage For Order. Was it as good as I remembered? Check it out and see.
I think I may like this album or I have a serious problem! Not sure which. Is it too much? Def Leppard’s ‘Hysteria’.
Stryper’s ‘The Yellow And Black Attack’ on beautiful blue vinyl.
Kiss ‘Destroyer’ on 8-Track. Who still has one of these?
George Michael’s ‘Listen Without Prejudice, Vol. 1’ on vinyl. Finally found one in the wild. So many great songs #freedom90 #prayingfortime #somethingtosave #cowboysandangels