The third Kiss solo album in the review series is none other than the Catman, Peter Criss.  Peter’s album was released on the same day as all the other band members on September 18, 1978.  And Peter, sadly, had the least selling and the lowest chart placing on Billboard charts at #43, however, that doesn’t mean it was the worst of the group…ok, yes it does!

Peter’s album was my least favorite, by far, and I haven’t heard it in over 30+ years probably.  And when I pulled it out for this review and gave it a listen, it isn’t bad as I remember.  I think that stems from the fact I know so much more about who Peter is that I feel the album fits him perfectly.  Peter is not a real rock drummer, he has more of a jazz feel and this is more of his style of music.  Does that mean I like this one, no, not at all, but I get it now and I respect him for it.

The idea of the solo albums is in part due to Peter and to Ace as they both were getting restless and I believe they wanted to try and do something on their own, but Kiss management wasn’t really wanting that to happen so the idea of each member doing a solo album under the Kiss moniker was dreamt up. And I don’t think any band has ever done this since if that gives you any idea of the overall success.  Peter was excited about the solo album because it gave him a chance to show Gene and Paul and that his material was as strong as theirs and that he had a lot to offer.  Yeah, that didn’t quite work out now did it.

The producer of the album was Vini Poncia and you know that name because he also ended up producing Dynasty and Unmasked because they needed him to keep Peter under control and happy.  The songs on this album were mostly written by Peter and most were written back in 1971 for his former band called Lips.

As far as extras, the Peter solo album had almost everything still it in.  It was, however, missing the album sleeve with the 4 solo album covers like below… 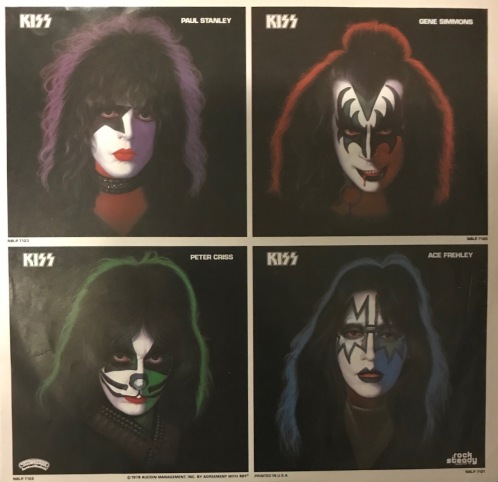 It did have a couple pieces none of the other solo albums I own had.  First it was the merchandise order form which tells me that my brothers didn’t order anything from Peter’s catalog  but stuff from the others since theirs was gone…oh well.

And the other great piece it had was an insert with all the song credits. It is still mint!!  I am not sure why the other albums are missing this piece. 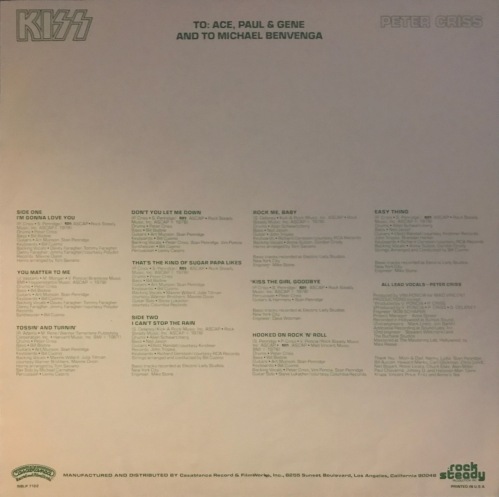 And of course it has the Poster…

And another piece to puzzle is complete…Next week the puzzle will be complete!!

Peter has a lot of musicians on the album including the great Steve Lukather who is practically on every 80’s album there is as he was a huge session musician and a member of Toto.  Peter actually doesn’t play drums on about 3 songs which is interesting. And that is enough chit-chat, let us get to the music.

First up is “I’m Gonna Love You” written by Peter Criss and Stan Penridge who worked with Peter in their band Chelsea.  It is an upbeat little number that has a few rocking moments, but feels more pop and r&b than anything else especially with those backing vocals.  Peter sounds good vocally and although doesn’t really sound too much like Kiss, it is a decent track.

Then we get “You Matter to Me” which feels more disco than anything with the keyboards.  Written by Vini Poncia, John Vastano, Michael Morgan, it is one of the few songs Peter doesn’t have a hand in writing.  With Vini writing it, I am not surprised by the sound and style as you will see that more and more with the next two Kiss studio albums.  This was the first single on the album and never charted.

“Tossin’ and Turnin'” is up next and it is the only true cover song on the album originally done by Bobby Lewis back in 1961.  It more of a rocker with some R&B tendencies and it fits Peter’s gritty vocal style.  He feels more at home with this one and the drum work is not bad either along with the saxophone break.

“Don’t You Let me Down” is the second single of the album and the only solo album to have two official singles, neither of which charted. Because the first song did so badly, this was rushed out as a second single.  This is pure R&B and Peter sounds soulful and cool, but the song is so laid back and soft that it is hard grasp hold.  It is as far removed from Kiss as you can get which I am sure was the reason for its demise.  After the first three tracks, this seems boring and brings disrupts the flow of the album.

The last song on Side 1 is “That’s The Kind of Sugar Papa Likes”.  This song is a blues track and has a killer solo by Steve Lukather.  The vocals sound strange on this one and not consistent with the tone of the rest of the album with some weird effect on them.  However, the song has a great groove and grew on me as I listened. It got me moving a little. 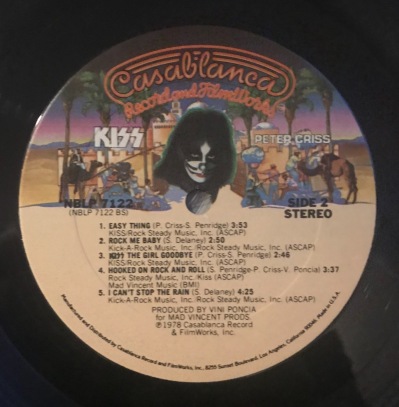 Side 2 kicks off with “Easy Things” and is the first song Peter doesn’t play drums on and there are a few on this side where that is true.  It is an acoustic sounding song probably trying to capture the magic of “Beth” to no avail.  It does jump in tempo and Peter gets more emotional in his vocal delivery, but it is so cheesy and it sounds like they are trying way too hard for a ballad hit and it is all misses.

“Rock Me, Baby” is up next and written by Sean Delaney.  The song is an old school rocker with the opening piano banging away and it has an R&B, soul feel to it as well which I guess all old school rockers had.  It is a fun song and although not the greatest, it works on its on level.

“Kiss the Girl Goodbye” is another ballad and another acoustic feel to it.  It ranks right up with “Easy Things” in that is as cheesy and overblown as you can get.  Peter’s vocals are whispery, awful and again, they are trying too hard to make something from something that is not there.

Then we get a song that I thought was a cover called “Hooked on Rock & Roll” which was written by Peter and Stephen. With Steve Lukather on guitar and the whole feel of the song, I would swear it would be something Chuck Berry could’ve done or any of those early rockers.  The song fits Peter’s vocals so might be a keeper.

Lastly, we get another ballad.  This time it is called “I Can’t Stop the Rain” and instead of an acoustic guitar feel, we get the heart strings pulled by a piano and some orchestration.  This one was written by Sean Delaney and Peter doesn’t sing naturally with this one and during the verses.  The choruses sound good, but it is too overly dramatic and the song falls flat for me. Too many ballads on this thing but it makes sense since two of the biggest hits with Kiss were ballads for Peter…”Beth” and “Hard Luck Woman”.

The Track Score on this album is 4.5 out of 10 for a 45%.  The score is a little rough as is this album.  Kiss was a rock band and Peter was not a rocker.  He loved his R&B and Soul so it probably started alienating him from his fans.  What is the saying, “Even Peter doesn’t want to be Peter Criss”…I know none of us growing up wanted to be him after this, we wanted the Ace of Gene make-up or even Paul’s.

The Overall album score would’ve been a 0 back in they day, but there are some moments on this album that are decent although few and far between. I will give the album a 2.0 out of 5.0 Stars.  It is not what I want to hear when I listen to Kiss.  The funny thing is, Peter’s songs with the band prior to this album were fantastic, but most of those songs were from Gene or Paul which might explain it.  We have one more to go on the Kiss solo albums so here is hoping for something better.