The second Kiss solo album in the review series is none other than the Demon himself, Gene Simmons.  Gene’s album was released on the same day as all the other band members on September 18, 1978.  And Gene had the distinction of being the highest ranked album on the Billboard charts at #22, however, that doesn’t mean it was the best of the bunch.

Gene approached his album a little different than the other members.  Gene wanted as many people as he could possibly get to appear on his album.  And he delivered a smorgasbord of guest including Joe Perry from Aerosmith, his current girlfriend Cher, Cheap Trick’s Rick Nielsen, Bob Seger, Helen Reddy, Donna Summer, Michael Des Barres and an unknown artist at the time Katy Sagal (you know her as Peg Bundy from Married with Children). And an interesting note on the album is that Gene did not play bass on it at all, that was handled by Neil Jason.

Gene’s album was also the most diverse of the bunch.  His songs covered the expected Rock genre, but there was a little funk, a little pop heavily influenced by The Beatles, a little Disney-ish and included all sort of effects and even string orchestration and a choir.  It was a hodge-podge, mish-mash of a whole lot of stuff.  This didn’t help make it an easy listen as it didn’t have the best flow, but it gave you a lot to listen to and not knowing what to expect.

My copy of this album does have the Gene poster inside, however, there is a slight rip in the upper left hand corner, otherwise in great shape.  As you can see below, it does look fantastic and when you piece it together with Paul’s, the puzzle is starting to take shape.

The first two pieces of the puzzle… 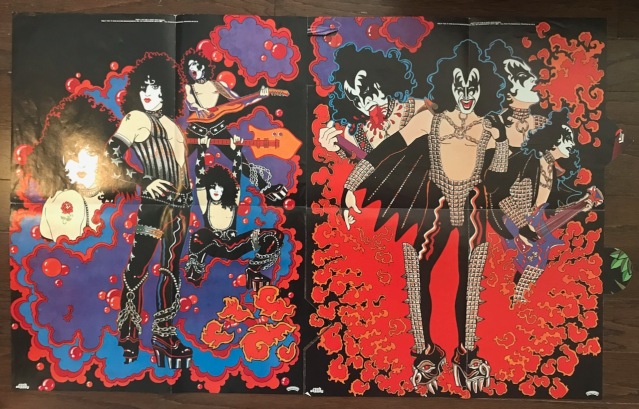 Now that was all that I had with this copy.  I did have the album sleeve as below, but no merchandise order forms for Gene. So not quite a complete package, but the poster is still probably the best part and most sought after.

And that is enough background on the album.  I think it is time we dive in to the album and see what there is to say about all these songs. And away we go…

The album opens with the song “Radioactive” which was written by Gene Simmons, as was all but 2 songs.  This song was the only single from the album and it has Joe Perry (Aerosmith) on guitar, Eric Troyer (ELO) on piano, Allan Schwartzberg (Mountain) on drums and Bob Seger on backing vocals.  A pretty stellar line-up. The song opens with a prelude that is very evil, sinister and demonesque which was filled with string ochrestration and it cuts away to the song.  The prelude was removed from the single if you were interested that little fact.  The song doesn’t really match the intro as it is fun and upbeat compared to the evil that came before.  It is straight-up rock song that probably leans a little more pop friendly.  A good song all on its own.

“Burning Up With Fever” is up next and was actually considered for the ‘Destroyer’ album and if you want to hear the demos for that version, check out Gene’s The Vault as there are two different demo for this song. John Shane Howell does a little classical guitar as the intro before the song kicks in.  This is the most Demon song on the album and would’ve fit on a Kiss album.  A little heavier which for Gene is always good.  You get Donna Summer on backing vocals to keep the guest train running.

Next you get “See You Tonite” which is actually a song Gene wrote prior to even Wicked Lester and the demo is also on ‘The Vault’. Gene was heavily inspired by The Beatles growing up and it is obvious with this track it has a very Beatlesque quality to it.  A light, mid-tempo pop song.  The backing vocals are Mitch Weissman & Joe Pecorino (from Beatlemania) to help give it that Beatles quality.

Then we get the darker song with a nasty bass groove called “Tunnel of Love”.  I would say this another typical Gene song and it has a lot of guitar players on it with Joe Perry back for another go at it, Jeff “Skunk” Baxter (Steely Dan/Doobie Brothers) and Richie Ranno (Starz).  My guess is Joe got the solo which is good.  Backing vocals had Donna Summer again sharing duties with the usual backing vocals by Katy Sagal, Gordon Grody, Diva Gray, Franny Eisenberg, Carolyn Ray (Aka Group with No Name).  Since this is more like I would expect from Gene, I like this track a lot.  Now, here is an interesting tidbit for you, on Gene’s ‘The Vault’, the demo for this song is there and the guitars and drums are played by none other than Eddie and Alex Van Halen.  It is pretty cool and you can hear Eddie lay down a little of his magic there.

The final track on Side 1 is “True Confessions”.  Another track considered for ‘Destroyer’, but totally would not have worked so thankfully left off.  Also, demo is on ‘The Vault’.  This version has Helen Reddy on backing vocals along with The Citrus College Singers.  This might be more of an R&B track and too much on the backing vocals and I am not a particularly huge fan of this one.  Overall pretty cheesy of a song.

Side 2 kicks off with “Living in Sin” which features a speaking part by his then girlfriend Cher. It opens with Gene doing more a speaking vocal before they kick in the instruments and the song really begins.  This is a fun Gene song and would’ve fit with Kiss albums so again, this was one I enjoy.  There is a part where the phone rings and Gene answers hearing a crazed fan fawn all of Gene and that person is Cher.  It is a little funny.

“Always Near You / Nowhere to Hide” is up next and is a pure ballad.  And one of the best ballads Gene has ever done.  I love this song.  It was taken from a demo called “Always Near You” (which you can hear the demo on ‘The Vault’ of course).  There is a Beatles influence on this one as and some fine backing vocals by the Group With No Name and Gene hits some really high notes at the end as it builds to a climactic finish.

The song then goes straight in to a guitar riff for the next song “Man of a 1,000 Faces”.  Gene wrote this one back in 1974 and has tried to re-work it numerous times before settling on this version for the solo album (2 versions of the demos are on ‘The Vault’ – do you care about knowing that??).  Another song that is not what you’d expect from Gene but one that works.  It is not quite a ballad and not a full on rocker.  There is some symphonic orchestration to this one which adds some maturity to the song and I feel really elevates Gene’s song writing ability.  The song is a highlight for me on the album.

“Mr. Make Believe” is another unexpected song from Gene that works so well.  With this album we are seeing a softer side of Gene that I am sure no one expected.  This song is pieced together from two demos, one called “One More Chance” and the other “Mr. Make Believe”.  They took the best of both and created a simply beautiful ballad.  You get the verses from “One More Chance” and the chorus of “Mr. Make Believe”.  Both are on ‘The Vault’.  If you listen to this one, you can hear the early British pop influence on the song.

Now we get a song we’ve heard before on a prior Kiss album called “See You in Your Dreams”.  Gene wasn’t happy with the original version on ‘Rock & Roll Over’.  The biggest difference on this is the backing vocals are the women from the Group with No Name.  The Kiss version rocks out a lot more and is better in my opinion so not sure a remake was necessary at all. Plus, the song gets a little too repetitive for my liking.

And lastly, we get the totally pointless cover of “When You Wish Upon A Star” which Gene wanted on here to show his love for Disney.  This song just kills the whole vibe of the album and for me is unlistenable.  I keep looking for a version of the solo album without this track, but sadly there isn’t one…but there should be!!

The Track Score is 8 out of 11 or 73% which is pretty decent.  When comparing this to the other solo albums, it is not my favorite, but it is not the worst either.  I think there are some great Demon-type songs on here and then some great songs that show a different side of Gene that are well worth listening to as well.  I did find the album a little disjointed and a little all over the place with not the best flow.  He did have some great guest on here that the others don’t do which is a plus, but it still didn’t take it to the next level.  Overall, I would give this a 3.5 out of 5.0 Stars as I do like Gene and will pull this out to hear on occasion.  I do love having all the demos on ‘The Vault’ to see where a lot of the thoughts were on the earlier versions. Some great history to own.