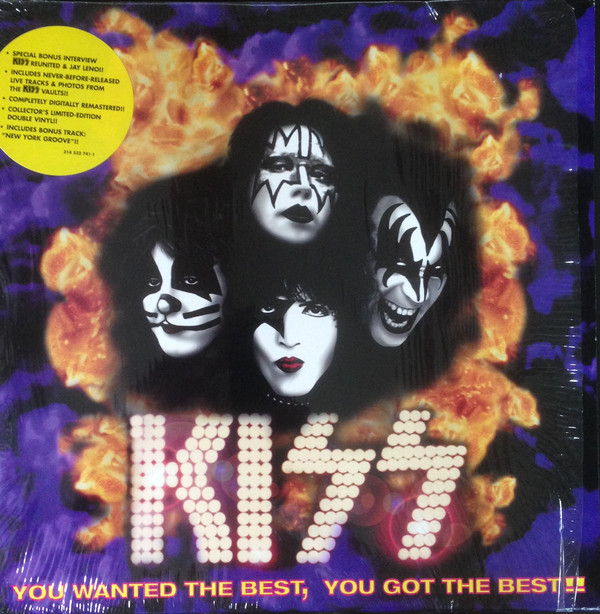 After the MTV Unplugged special that ran on August 9, 1995, the fan reaction was huge. People were itching for the original line-up to get back together in make-up. Now Kiss is not one to generally miss a good opportunity. While they were in the studio with their current line-up of Bruce Kulick and Eric Singer recording their next album (Carnival of Souls), Paul Stanley and Gene Simmons were contemplating their next move. Well, the noise was getting too hard to ignore and so was the money.

The Carnival of Soul album was shelved (for the time being) and Bruce and Eric were pushed to the side as Peter Criss and Ace Frehley were back in the band. The Kiss Reunion was going in full force. The band decided to get back together, the make-up was re-applied and the Tour was scheduled. This tour would be called the 1996-1997 Alive / Worldwide Tour. If you want to read about my concert experience a little and see the Tour Book…click TOUR BOOK.

In support of the Tour, Kiss decided to make a massive cash grab and released a Greatest Hits compilation of sorts. This one was released on June 25, 1996 and was called “You Wanted the Best, You Got the Best” and consists of all live tracks from the band with Ace and Peter. The name of the album, of course, stems from the opening line of all the Kiss shows when most famously, roadie JR Smalling would scream out “You Wanted the Best, and you got it. The Hottest Band in the Land…KISS!!!”

Before we get to the music, let’s talk about what was inside the Album. Not much, sorry. When you bought this album, inside was simply order forms for Kiss merchandise because Kiss never missed an opportunity to sell you something…

Alright, back to the music on the album. Did this album offer anything new and different. Well yes, it actually did it. But it mostly consisted of songs taken from the albums ‘Alive!’ and ‘Alive II’. There were, however, 4 previously unreleased tracks as well. You get four songs that were taken from those eras that were outtakes or leftover tracks. Now, if you were in Japan you got a bonus track. Let’s be honest, this is a total and utter cash grab. There is nothing real special. This is pure & simple, Kiss trying to profit off the new found interest in the band. But at least you got some unreleased stuff which is still way more than you get on from the next release. I’m getting ahead of myself, let us talk about what you get on this one.

The first record has the most unreleased stuff. The first three tracks are all unreleased. First up you get “Room Service” recorded in Davenport, IA in 1975. Then you get “Two Timer” which was recorded at Cobo Hall in Detroit MI on May 16, 1975. The third track is “Let Me Know” and it was recorded at the same Cobo Hall show as the previous track. These are cool tracks as they aren’t normally played live so that much is awesome about them. But here is the crazy thing. They were overdubbed and remixed in 1996 with not Ace on guitar or probably not even Peter on drums. Bruce Kulick has admitted he worked on the overdubs and those drums sound pretty damn good and clean…and a little modern. I’m just saying. The crowd noise also sounds so fake and it doesn’t really feel that live. Who knows what to believe.

The remaining of Record 1 are three tracks from ‘Alive!’ which are “Rock Bottom”, “Parasite” and “Firehouse” and one track from ‘Alive II’ which is “I Stole Your Love” and “Calling Dr. Love”. If you don’t have those two albums, then these songs are classic and worth having. But if you don’t, you aren’t really a Kiss fan are you…sorry I’m judging and that isn’t nice…but seriously why don’t you own those two albums…better than this crap!!

The second record kicks off with another previously unreleased track and that one is “Take Me” which was Los Angeles, CA and recorded in 1976. Again, this was overdubbed in 1996 as well. It at least has more of a live feel than those first three. Paul is a little rougher around the edges and there is a better energy so I won’t bash this one. Now most of the rest of the album are tracks from the two classic albums again. The tracks are “Shout it Out Loud”, “Beth” and “Rock And Roll All Nite”.

If you have the Japanese edition, your album would end with another unreleased live track. This one was Ace’s song “New York Groove”. This one is cool in that it was recorded from Australia back in 1980 and actually includes Eric Carr on the drums which is always cool. I actually like this track as well and glad I have it. I like it because it has the warts and all as they didn’t clean up the feedback or much of anything which makes it really live. On Side D of this album is a 17 minute interview with the band hosted by Jay Leno. Which basically makes it pure promotion, nothing but softball question and Peter is the only that sounds like he is having any fun (maybe Ace too). Gene and Paul are the same as they always are…stick to the point and sell it. Now the funny thing is Paul states that everyone is “Straight” and “Clear Headed”, but if I’m not mistaken that during rehearsing for the Unplugged, Ace would show up late and in a slight “haze” from possible drinking so not an honest comment completely.

And that is it, thank goodness. What a waste of product this truly is and is only for diehard fans and idiots like myself. However, I don’t own this yet as it is really expensive to get on vinyl. I will have it at one time, but right time, right price! As far as a score, it gets a 2.0 out of 5.0 Stars only because it does have 5 unreleased tracks at the time. If it wasn’t for that, this would be a 0!!