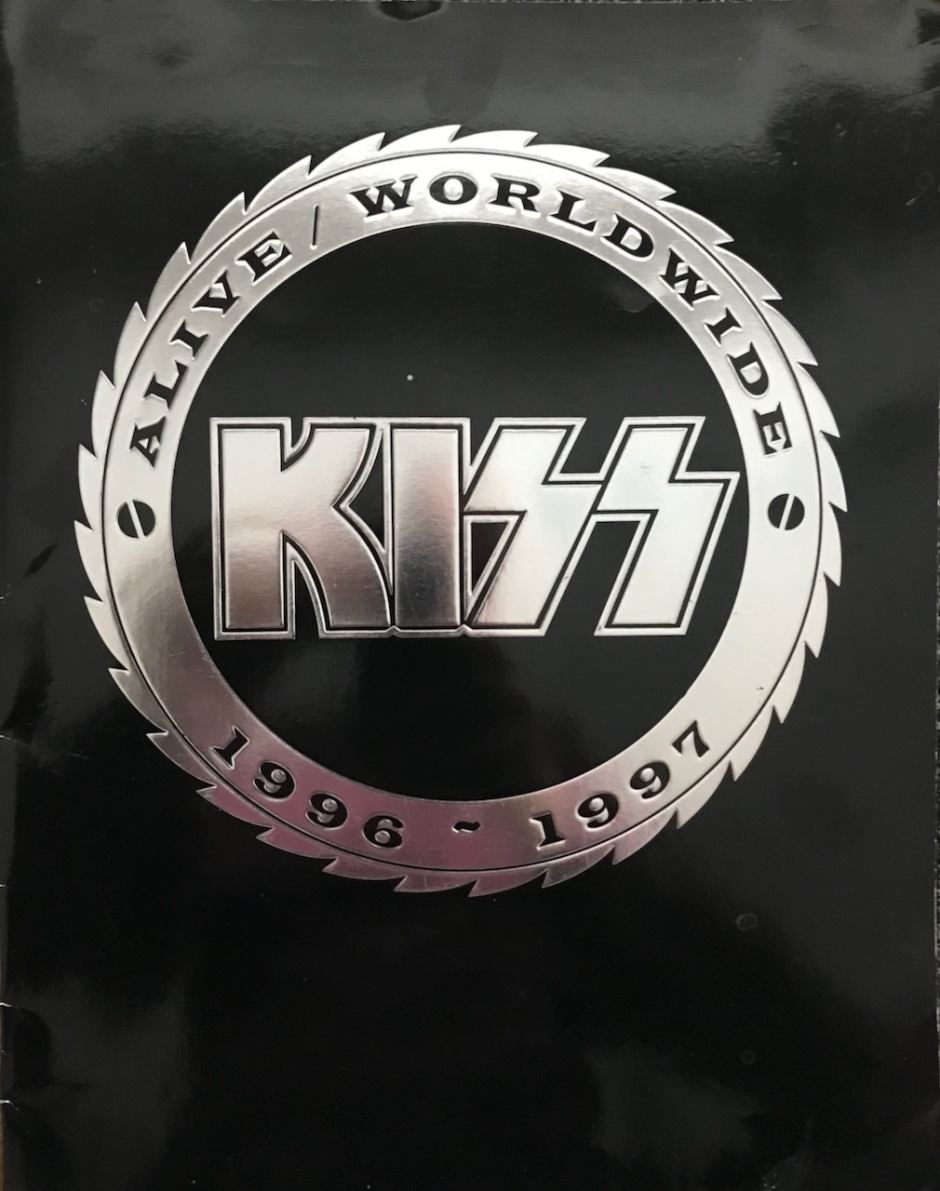 In my quest to get all the Kiss Tour Books in my collection, I have now come to my fifth in the Tour Book Series.  This is one of two that came from the Kiss Alive / Worldwide Tour from 1996-1997.  You might remember I already did one from that tour, but that was a special edition book during the 1997 part of the tour which included the Giant 1997 Poster Calendar and had a silver cover. It was a replica of the European Book. Plus, all the pictures were different.  This is original Tour Book with the Black Cover.

I bought this book right at the beginning of the pandemic. A friend of my brothers was selling it and so he reached out to me and I said, yes, buy it for me (I did pay him back). I asked my brother to hold on to it and I would grab it the next time I was down in Atlanta which would’ve only been about a month or two after I bought. 9 months later and I still hadn’t gone down thanks to Covid. I finally asked him to mail it on up to me and he graciously did.

One of the interesting things about this book is that it was bought at the October 1, 1996 show at the Omni in Atlanta. How do I know, the ticket stub was still inside. That for me is cool to know which show it was purchased because I was actually at that show. I can’t believe I have a book from the actual show I attended. What are the odds of getting one 25 years later. Our ticket stubs are below.

Now on to the Tour Book.  As we normally do, I will show you every page of the book in the order of the book so you can see what you missed from 1996.  This Tour Book was from one of my favorite concerts of all time. The chance I finally got to see the Original Four and In Make-up. A dream come true as I never got to see them before the original break-up back in day.

To kick it off, the typical band pictures, but this time, they go through the years with make-up with some historical shots and chronologically between all the years up to 1979. There are some great moments captured here.

That was a fun trip through the years. Now we get to the centerfold…so, no nudes here…

Then it is time for the individual band member pictures. Each gets two pages, one giant shot and a couple smaller photos. Equal opportunity photos.

Paul Stanley is up first…

And last, but not least…Peter Criss…

Now we get two ad pages where Gene and Paul are pimping their guitars. Where is Ace and Peter’s gear ad pimping??

And the last two pages are another ad for the Kisstory Photo book and the typical Tour Credits where they highlight all the people involved in putting the tour together.

And then the final back cover shot. This one is signed like the other book from this tour, but this is the black back cover and not the silver. And again, this part of the book, not an actual autograph…sadly…but how cool would that have been.

And there you have it. The Kiss Alive / Worldwide Tour Book from the 1996-1997 Reunion Tour. Man, it was glad to have these guys back!!

If you want to check the others out in the series we have done so far, click on the links below. We still have a couple more to do and hopefully I will get more of these in the future to expand this collection even more. Thanks for stopping by.

Other Tour Books include the following: