I started 1985 with a Kiss concert (Animalize Tour) so I had to end it with a Kiss concert. This one was on December 31, 1985 and where else, but at the Omni.  This show was for the Asylum Tour this time. The opening act for this show was Black n Blue.  Gene had produced their album so no wonder they opened. Same line-up as the earlier show so nothing really new except the costumes were quite colorful and loud and looking back are quite hideous.

This setlist was different in the sense that Rock and Roll All Nite was not the encore.  This encore was a big jam session with a lot of covers and I remember it being pretty cool.

And like the last show, I bought a Tour Book which I still have today and we are going to go through it right now.  Bruce finally gets his spotlight in the Tour Book as he wasn’t in the last one even though he performed.  It was still Mark St. John as the band didn’t have time to change it out or want to spend the money to do so.  I have him now and that is all that matters.

The first page, as always, is a list of all the albums they have released.  This page isn’t much different than the last tour book since it has only been one album.  Well, there is one big difference.  The ‘Creatures of the Night’ cover is different. It now has the band unmasked and Bruce was on the cover…wait…I don’t think he was on that album…but then again, neither was Ace and he was on the original cover.  I guess it is okay…not really!!

Then we get the obligatory group shot in all the band’s colorful glory!  Their costume designer for this album should’ve been shot…but it was what was happening at the time.

Before we get to the band member photos, we get a page of random photos of the band on stage in these glorious outfits and Gene’s rosy cheeks.

Now, we are on to the band member photos and first up as always is the one and only, Paul Stanley.  As I said before, he was the band in the 80’s so he should get top billing. 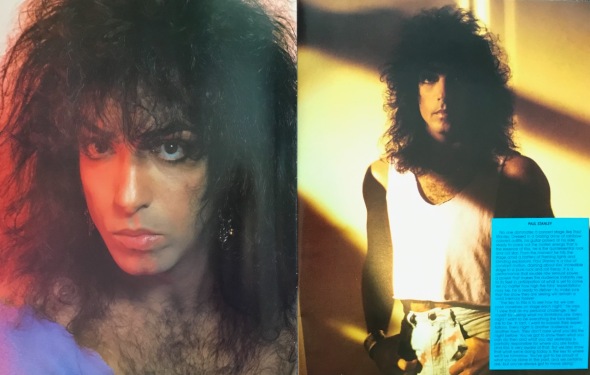 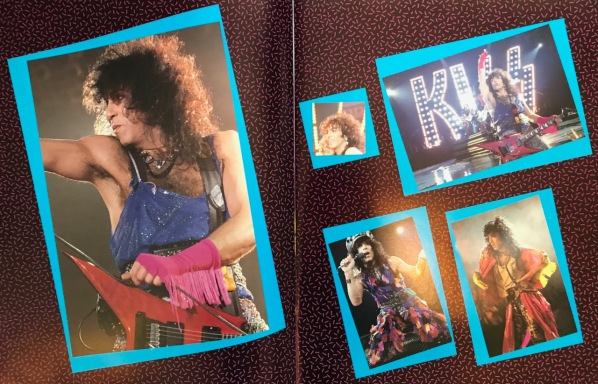 Then comes Gene who seems a little more comfortable then last time, but still not quite in his element anymore.  At least we get a fire breathing shot.  Glad that was still a thing. 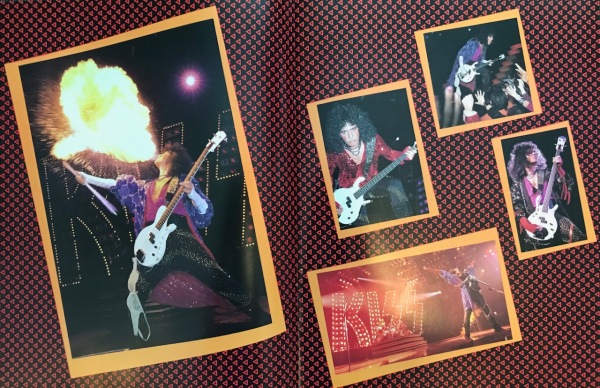 And a small interruption of the band member photos as we are now to the centerfold and if it isn’t going to be a naked woman, at least it is a full stage shot (although not a great one, a little blurry). 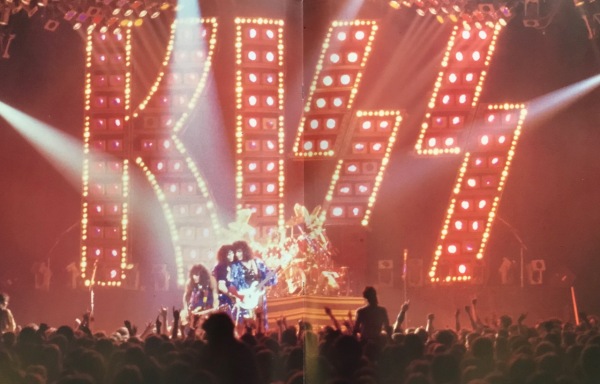 And now back to the band members.  Up next is the late, great Eric Carr.  Man, he loved those one-piece body suits.  And dang he had some hair. 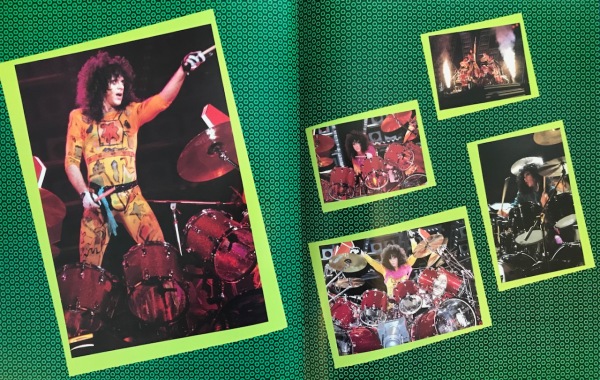 And last, but certainly not least, one of my favorite Kiss guitarists, the awesome, Bruce Kulick. It is so nice he finally got the recognition he deserved.  Man, he was great for the 80’s Kiss. 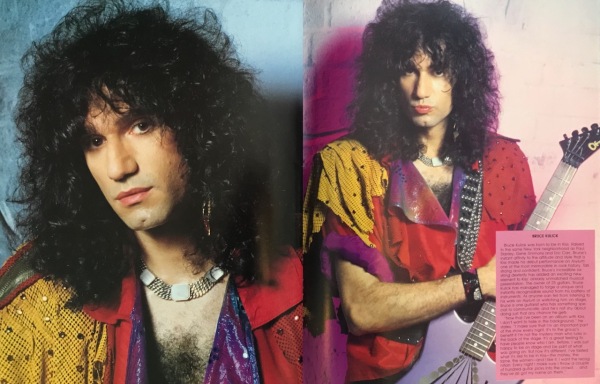 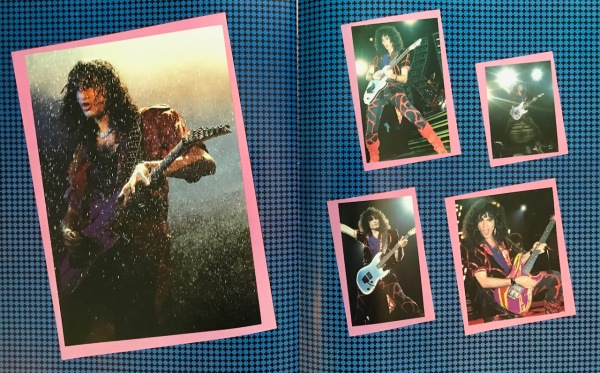 And now it is time for a bunch of random band photos, mostly the look like they are from their video shoots for the album.  Some nice stuff. 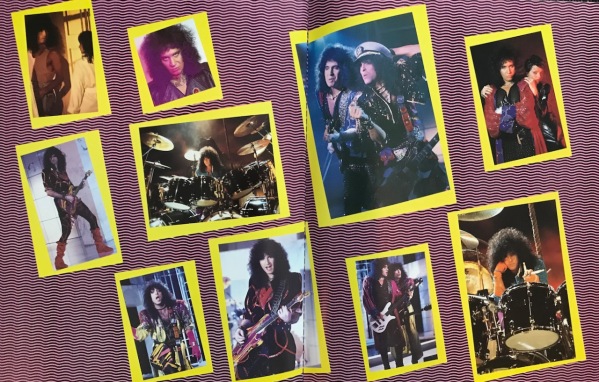 Then we get an ad.  Yep, an ad.  Paul was being sponsored by guitar maker BC Rich and they placed an entire page ad to let everyone know it. 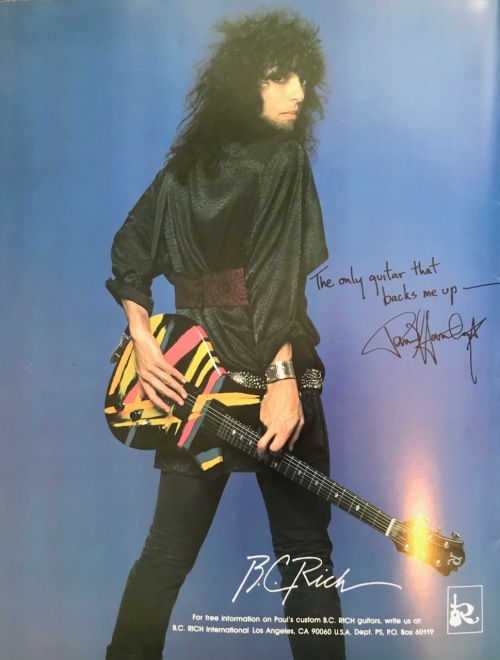 And almost to the end.  The next to the last page is the typical shout-outs to the road crew and everyone responsible for the Tour.  You got do give the people making this all happen as much love as possible. 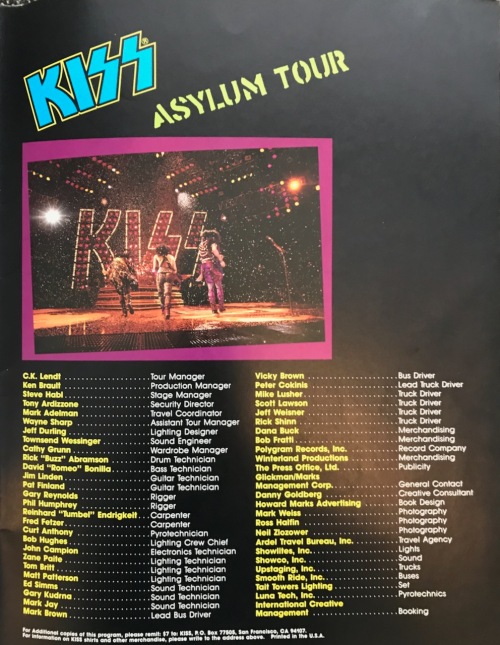 And then it is time for the back cover which has Eric & Bruce from the Asylum album cover.  Hell, Gene & Paul are on the front so why not put the other guys on the back.  And notice everyone’s lip color.  It matches the signature colors for the original members and the instrument they played. Bruce is Blue for Ace and Eric is Green for Peter.

And that is the end. I hope you enjoyed.  I only have one more Tour Book at this time and it is for The End of the Road Tour. I wonder if I will get in to trouble plastering that page by page.  Should I wait until the tour is over or should I go ahead and do it.  Let me know in the comments.  Thanks for stopping by.