I started 1985 with a Kiss concert (Animalize Tour) so I had to end it with a Kiss concert. This one was on December 31, 1985 and where else, but at the Omni.  This show was for the Asylum Tour this time. The opening act for this show was Black n Blue.  Gene had produced their album so no wonder they opened. Same line-up as the earlier show so nothing really new except the costumes were quite colorful and loud and looking back are quite hideous.

This setlist was different in the sense that Rock and Roll All Nite was not the encore.  This encore was a big jam session with a lot of covers and I remember it being pretty cool.

And like the last show, I bought a Tour Book which I still have today and we are going to go through it right now.  Bruce finally gets his spotlight in the Tour Book as he wasn’t in the last one even though he performed.  It was still Mark St. John as the band didn’t have time to change it out or want to spend the money to do so.  I have him now and that is all that matters.

The first page, as always, is a list of all the albums they have released.  This page isn’t much different than the last tour book since it has only been one album.  Well, there is one big difference.  The ‘Creatures of the Night’ cover is different. It now has the band unmasked and Bruce was on the cover…wait…I don’t think he was on that album…but then again, neither was Ace and he was on the original cover.  I guess it is okay…not really!! 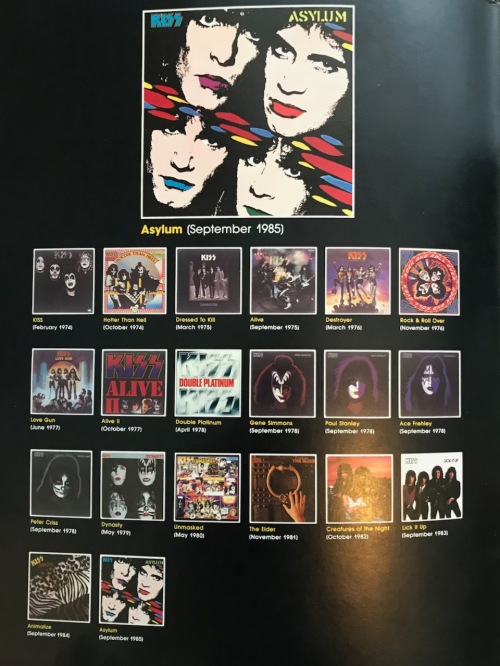