Founding members Mark Slaughter and Dana Strum were in a little band called Vinnie Vincent’s Invasion.  When that imploded due to its namesake, they decided to form a new band and they liked Mark’s last name and so it became Slaughter.  The decision was easy because the VVI label, Chrysalis, just transferred the Invasion contract to them and let them form a band. Pretty easy!!  They added guitarist Tim Kelly who has since passed away in 1998 and drummer Blas Elias.

The band put out 5 albums over their career from 1988 to today.  The band showed up on the scene with their first album in 1990 and their second came in 1992. The problem was not the albums, but the timing.  The market was so oversaturated with these 80’s Rock bands that the tide was turning. Grunge showed up on the scene and wiped them out of existence on MTV and the radio.  But they didn’t stop.  The continued to release albums throughout the 90’s and maybe someday we will get a new one.  For now, we will discuss and rank their 90’s output.  I hope you enjoy.

The band’s third album was called “Fear No Evil” and released in 1995.  I had already checked out by this time and didn’t even know they had an album.  Listening to this now, it really isn’t that bad.  They don’t really have a terrible album. This one sounded like the first two, but I think the biggest problem was Mark’s vocals were a little more shrill then usual.  Mark’s vocals are a little different and not for everyone. They never really bothered me except this one was a little too much.

There some good songs on this one including the bluesy “Searchin'” and “Let the Good Times Roll” as well as the opener “Live Like There’s No Tomorrow”.  Outside of that, it was a little bland and not one I go to very often.

Around the mid-90’s, bands from the 80’s were experimenting.  Def Leppard did it with ‘Slang’ (which I love) and Slaughter did it with ‘Revolution’. There was still the rock elements, but at times the band went all psychedelic rock on you and I have to admit, I kinda dig it.  It showed growth and adventure and a willingness not to do the same old same old.  The opening track “American Pie” was actually quite exciting and so different that I loved it.  Not the whole album is out there in left field, but there enough journeys there that it makes for an interesting stroll.

They also do a great cover of “Rocky Mountain Way” by Joe Walsh which is a cool choice.  Some other beauties on this one are “Hard to Say Good-bye” and the cock rock song “Tongue n Groove” with the whole “put the tongue in your groove” line.  It is so bad, it is good.  I would also say I like “Heat of the Moment” as well…don’t want to leave that one out.  This was a valiant effort in trying something new. 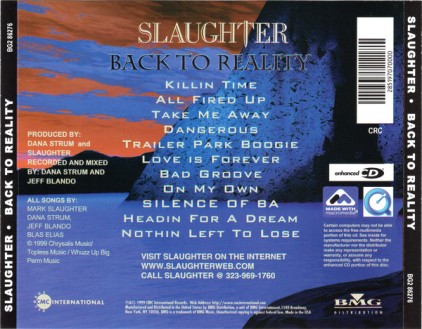 I think the band caught a lot of slack for ‘Revolution’ because the next album was called ‘Back to Reality’ and it is back to that classic Slaughter rock sound.  And, it is actually quite fantastic.  From the opening track “Killin’ Time” all the way to “Nothin’ Left to Lose” the band is back in full form and they rock out from beginning to end.

The highlights for me were “All Fired Up”, “Dangerous”, the ballad “Love is Forever” and the groovy “On My Own”.  It is a step back in time (albeit only 10 years, but still) and is actually quite refreshing to hear them play they way they should.  A pleasant surprise for me and one I will pull out quite often.

The band’s follow-up to the massive debut turned out to be quite stupendous.  There was no sophomore jinx on them as they delivered the goods.  Now it only Gold and not 2x Platinum, but I’m sure they were happy with a Gold record.  It was more of the same as the debut, no need to change the formula at this point.  Being early 90’s CDs ruled and therefore you got 14 tracks which is probably too long as I like the less is more attitude of an album.  10 songs, get in and get out!!

The big hits on this were the ballads of course.  “Days Gone By” and “Real Love” were two of the big hits with “Real Love” actually being the best of the two by far.  But don’t think they didn’t have some rockers on here because with “The Wild Life”, “Reach For the Sky” and “Shake This Place” you got exactly what you wanted. 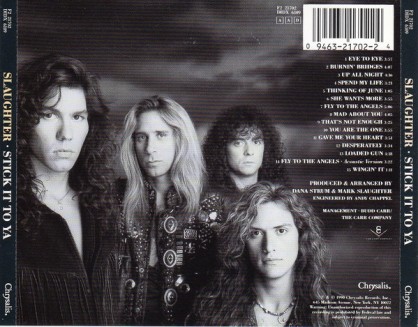 The debut album by Slaughter was a statement.  A big F# U to their former bandmate Vinnie Vincent (just listen to the song “Burning Bridges” and you will know why).  They had a lot to prove both to themselves and to Vinnie that said, we can do this without you and do it better.  Which they did.  I want to say I saw them open for Kiss on their 1990 tour (I could be mistaken though) and that was my introduction to the band.

The album was full of rockers including “Up All Night”, “Spend My Life”, “Mad About You” and “Desparately”.  But it was the one ballad that made them stars. That was the song “Fly to the Angels” and it is probably one of the best ballads to be done (not the best, but up there).  This was the most complete album they had, few fillers (if any) and just a solid album all around.  They showed Vinnie who does it better, no question.

And there you have it, Slaughter’s studio albums in order of how I rank them from the worst to the best.  Let me know what you think.  Where did we differ and where did we agree.  What is fun about these list is how differently each album impacts people. What I like, you might not, but we like the same artist and that is all that matters really. And if as a result, you find something new, then my job is done!!!

22 thoughts on “Slaughter – The Albums Ranked Worst to First”