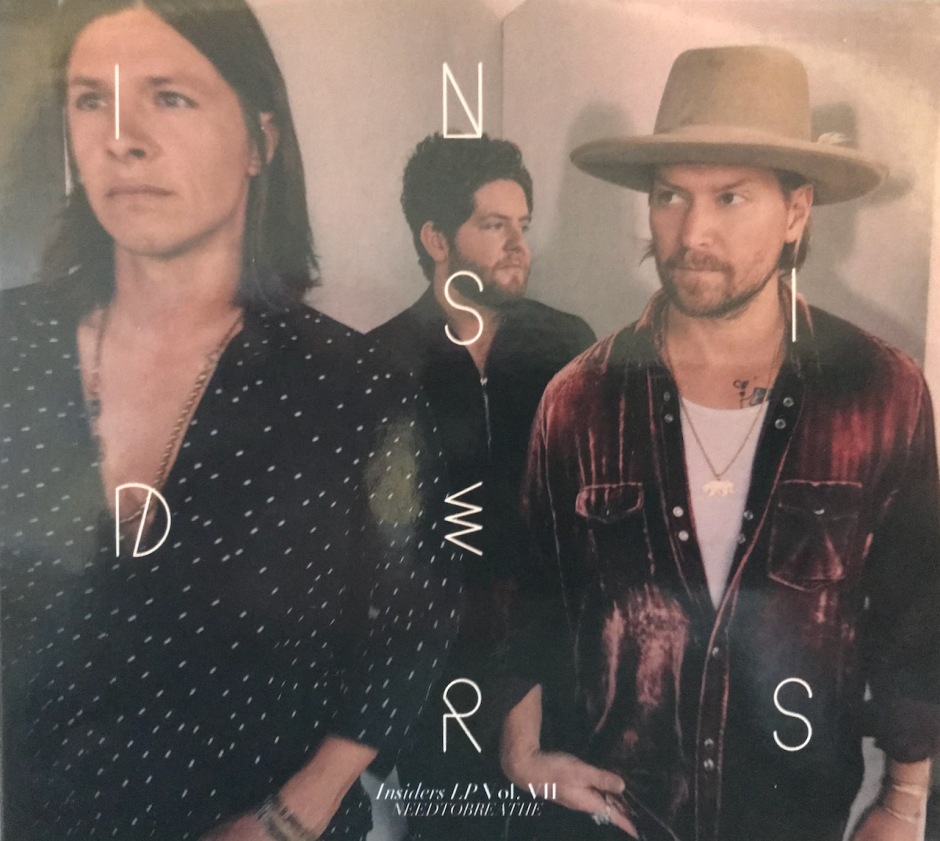 As you know if you visit my site, one of my favorite bands is Needtobreathe.  I have everything they have put out on vinyl and now I am going after everything they have released on CD (that they don’t have on vinyl).  And the CDs I want the most are the exclusive fan club CDs they release each year.

I had never joined prior to the 2020 year so getting my hands on these has not been easy as it is not cheap. I am looking for the right price and most of the time it is too high.   I finally grabbed my first one at a price less than the membership fee which was Insiders LP Vol. 2 for $40 and 9 months later I got one even cheaper which was Insiders, Vol. 5 and it was only $25. And then a couple days later got another for $27 which was Insiders Vol. 3. Sorry we aren’t going in order, but we are going in order of when I receive them. And I just joined the 2021 Insiders Club and this time I am getting a T-Shirt and you guessed it, A Mask!! The CD for Insiders Vol. 8 will be out by January 2022. For now, we are discussing Insiders, Vol. VII from 2020 which this time it did cost me the cost of the club because I got tired of tyring to find all these. I still need volumes 1, 4 and 6 if you have them and want to sell.

Who is Needtobreathe you may ask and I will tell you. Needtobreathe is a rock band from South Carolina who mixes rock, folk, southern rock, country and whatever else they like all with a great message or story to tell. Currently the band is…

All of these recordings would’ve had Bo Rinehart who has recently left the band and most will have touring drummer, Randall Harris or former drummer Joe Stillwell.

This set is a collection is another 14 live tracks from shows around the U.S., mostly in the South with the exception of one from L.A., Chicago and even Alaska. Let me tell you it is yet another fantastic Insider CD.  The band spends some time with these and the production quality is amazing.  They put as much time in to them as they would a normal studio album or live album release to the general public.  The mix is done so the songs blend in with each other perfectly and it feels like a complete show although they are from different shows, different years and different band members in some cases.

The album kicks off with the rocking track “Feet Don’t Fail Me Now” which is uptempo straight ahead rock song that would get the crowd moving and you can feel the energy pouring out the speakers. Then we jump back several years earlier with the song “Oh Carolina” which keeps the energy going. They slow things down a little with the song “Darling” which is done mostly acoustic guitars and a piano and sees the band handle some great vocal harmonies. It is a beautiful track to begin with, but live takes it another level.

One thing nice about these live sets is we sometimes get the covers that they do live and this time around we get “Joy / When the Levee Breaks” which is a real treat as we are mixing a Lucinda Williams song with Led Zeppelin and they sound perfect together. The songs are done with a lot Country twang mixed with Southern Rock and a little Gospel. Then we jump in to the song “The Heart” which is a hand-clapping, foot-stomping good time. Without missing a beat we are straight in to the song “State I’m In” which keeps the party going before we end the first half of the album with “Don’t Bring That Trouble”. The song is another rocker with some cool guitar riffage and a roaring ball of energy that will get you out of chair and screaming with the crowd. They throw in a little Stones in to the song with “Gimme Shelter”.

The second half of the album starts off with the band’s spiritual cover of “Go Tell It On the Mountain” which has become a special song for the band as they really enjoy playing the song. Then we get the next cover medley which takes the Jackson’s “I Want You Back” and puts it with the Otis Redding / Black Crowes “Hard to Handle” and ends it with a piece of their own song “Lay ‘Em Down” which all seem to fit together nicely. They take the songs and add a little funk and blues and the even make you feel like you are at church. Which shows they can do anything and have a good time at it. Then we get in to another great rocking track called “Great Night” and if this was an actual show with this setlist, you would be having that easily!

The last set of songs aren’t all necessarily live as the next two tracks are slightly different as first up is “Bullets (Mountain House Demo)” which was recorded in 2017 and then “Hard Love” which is an alternate version worktape of the original track I assume. “Bullets” is a really cool song with Bear going falsetto on his vocals and a cool guitar riff. It is a more raw version might be as good or better than the original. “Hard Love” is one they have done several versions of with various singers accompanying Bear on vocals. The original version was all Bear. This is one has a big echo on his vocals and a woman’s church choir (it sounds like) singing along with him on the chorus. It is the most unique version of the song they have put out and I am digging the change.

We are down to the last two songs. First is off their most recent album and the song is “Out of Body” and was recorded this past August in Franklin, Tennessee during the lockdowns. If you read the review of this album, you will know how much I love this song. This version is only different by the fact it was recorded live, but otherwise they stick to the song and do have a nice guitar solo to end the song which is cool. It is such a powerful song. They end the album going back to live with a song they ended the show in which it was recorded so it is fitting it is the ending track here. The song is “Let Us Love” which delivers another powerful message about what the world needs more of…Love. We all should give as much as love out to the world as we can as the world needs healing (at least the U.S. does right now). It is one of my favorite tracks by the band and a great version here as they go crazy at the end getting the crowd fully involved. Bear and the crowd let out an epic scream and it sounds like a lot of fun.

I will tell you right now, there is no score going to be given for this as this is something I can’t remove my bias from, but let me tell you it is utterly amazing and why I am trying hard to get these special releases by the band. I now have 4 plus the 2021 version that I just signed up for but won’t come until probably January 2022. That will give me 5, but there are still 3 more to find! All I can say is, if you are a fan of Needtobreathe, these are must haves and let me tell you the band knows what their fans want and they deliver it!