As you know if you visit my site, one of my favorite bands is Needtobreathe.  I have everything they have put out on vinyl and now I am going after everything they have released on CD (that they don’t have on vinyl).  And the CDs I want the most are the exclusive fan club CDs they release each year.

If you join the Needtobreathe Insiders fan club (for $60 a year), you get a Live CD of tracks collected from the band’s live performances. (among other things such as a T-shirt and a free live track download ever month – that is 12 more songs).  Needtobreathe actually records every show they put on so they have a ton of tunes to choose from.  They have released 5 volumes and number 6 will be coming in December.  I have never joined so getting my hands on these has not been easy as it is not cheap. I am looking for the right price and most of the time it is too high.   I finally grabbed my first one at a price less than the membership fee.

Who is the band and the musicians on this album?  Easy enough, they tell you that… 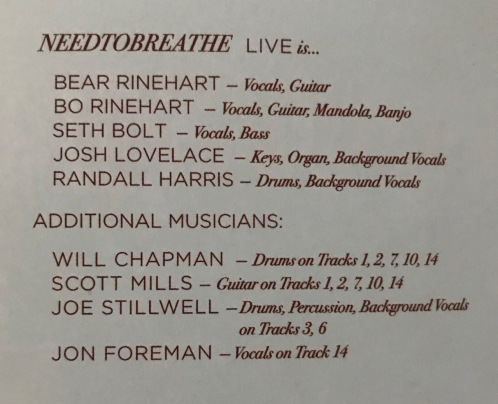 The first one I got a hold of is ‘Insiders LP, Vol 2’.  It is a collection of 14 live tracks from around world and let me tell you it is fantastic.  The band has spent some time with these and the production quality is amazing.  They put as much time in to them as they would a normal studio album or live album release to the general public.  The mix is done so the songs blend in with each other perfectly and it feels like a complete show.

I already have two official live releases, so what makes these so special?  So many things.  First is having different versions of the studio tracks.  They have medleys, extend out the instrumentals, change the style of the song and so many great interpretations of the songs I already know and love.  The opening track “State I’m In” is brilliant and so full of the live energy and really makes you feel like you are at the show.  The song then ends with a little of their song “Oohs and Aahs” and then bleeds into the fast paced “Feet Don’t Fail Me Now”.  Again pure energy and excitement on how they make these songs so potent live.

Second and most important are the rare gems.  The covers!  And they have a few on here both on their own and medley’d up with their own tracks.  First up is the Tom Petty cover of “You Wreck Me” which has Bear Rinehart sharing vocal duties with guest singer Matthew Mayfield. But the most awesome part is the fantastic guitar work by Bo Rinehart who really tears it up on this one as well as all over this album.

The next cover is a little of the Jackson 5 hit “I Want You Back” along with Otis Redding/Black Crowes “Hard to Handle’ and then ends with a little of the band’s own song “Lay ‘Em Down”.  It is a fun, good time mash-up and a bit strange at the same time.

The third cover is “The Weight” by The Band.  This cover had numerous guests including Switchfoot, Drew Holcomb & the Neighbors along with Colony House.  A good old American folk style song sung by a collection of great artists.  It is done acoustically and is filled with guitars, a harmonica and some soulful singing.  It is really awesome.

The last cover is a brief version of Bruce Springsteen’s “Terry’s Song” before they go full force into their big hit “Brother” which featured the band Colony House as well as Jon Foreman of Switchfoot.  Now, Colony House toured with Needtobreathe so they appear on a lot of these tracks.

And the last thing I love about these are the times when they go acoustic on a song and they captured a beaut with a backstage acoustic performance of “Rise Again” recorded in Glasgow. The song is from the ‘Rivers in the Wasteland’ album and I find that this is a lot more interesting when played this way.

The whole collection of songs captured some amazing live performances. You could feel the energy at the shows and they even surprise you with how some of the interpretation of their songs live.  One of the big standouts was Bo’s guitar playing, he really showed-off at times and proved what a great guitar player he truly is.  Bear’s vocals are spot on as usual and at times sounded so much like the albums.  A really worthwhile collection and let me tell you, I will get the other 4 volumes and let’s be honest, I will probably join the club this year so I no longer have to hunt for the releases.  This is what you get this year…

A one year Premium membership to “The Insiders” includes:

Anyway, thanks for hanging around.  I’m not rating the release as I am too biased on these sets and it would get a 5 Stars is was even better than I thought it would be.  Honestly, I didn’t think the production would be that great for a fan club release, but I was so wrong.  They didn’t half-ass anything with this at all.