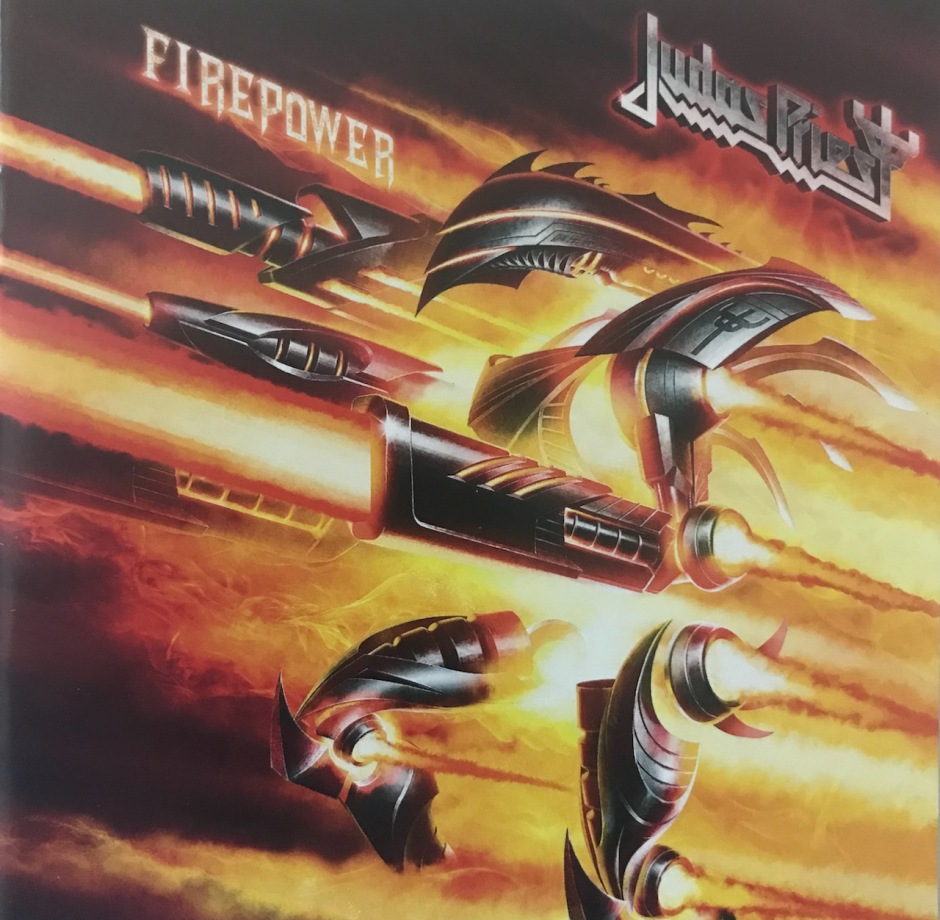 After the stellar performance of the prior album ‘Redeemer of Souls’ thanks in large part of the addition of Richie Faulkner, the band started work on the next album in 2016. However, it took a long time to finally get to the studios in March of 2017 and the band would go until June to finish the recording. The album then sat for months on months and finally get released on March 9, 2018 where it went on to sell around 49,000 copies in the first week putting it at #5 and their highest chart position. Yeah, 49,000 is a far cry from their heydays, but 49,000 in 2018 for any band is a decent week of sales…oh how things have changed.

But sometimes things to don’t change as the band brought back former producer Tom Allom in to the mix to co-produce the album with Andy Sneap. It had been since 1988’s ‘Ram It Down” as the last time they worked with Allom, so 30 years. That is a long gap. Andy would have such an impact with the band, he would actually go on tour with the band as guitarist. The reason for that was due to some sad news from the camp. The great Glenn Tipton was retiring from touring due to his battle with Parkinson’s Disease. The illness was getting to be too much to play some of the more challenging parts in songs. That doesn’t mean he didn’t pop up on stage every now and again when he felt good enough to play because he did. Glenn is still a member of the band and will still help creatively and in recording. Touring is just too much and too unpredictable on how he’ll feel.

One of the really cool things about this album is the cover art. I remember seeing this and thinking, Damn! That is a cool cover. The next thing I know, there was a filter or something because people started replacing their cover picture on Facebook with their name in Judas Priest Firepower font. It was cool. I didn’t do it though as I was probably too lazy as it seemed like to much work and I didn’t want to be a follower, as I am a leader…no, who am I kidding, it was the laziness part!!

The band is still Rob Halford, Glenn Tipton, Ian Hill, Scott Travis and Richie Faulker who is back for his second album. Now, we have a long album ahead of us with 14 songs, so we better get started as there is a lot to discuss.

The title track, “Firepower”, kicks off the album with a bang. It is racing guitar riffs and Halford scream are sign that Priest mean business. The speed metal pace is ferocious and yet the song accessible. The song feels current, but yet all things from the past as well. Scott’s double bass kick drum is brutal and the guitar work by Tipton and Faulkner is freaking incredible. A powerful statement to kick off the album.

And they don’t slow things down at all with the next one as it is straight in to “Lightning Strike” without any hesitation. They keep the destructive force going with more kick ass drumming and riffs. Rob’s vocals are more melodic, and the bridge/chorus are catchy to get you singing along. Rob’s vocals show some range as he gets high and screeching at times and then goes lower during the verses. He sounds great on this one. You do get a better solo on this one but it is way too short.

“Evil Never Dies” starts off with the line “The devil’s moved from Georgia” and I wonder is this a shout out to Charlie Daniel’s “The Devil Went Down to Georgia” because otherwise, why Georgia?? The song is very menacing sounding as anything that talks about the devil should be creepy and eerie. What isn’t creepy is the blistering solo on this thing and though too short, just wait, it comes back for another quick one later in the song. Two solos…yes, please!! Rob sings this one more menacing as well and then mid-song he switched more to a speaking a verse style before going back to singing the chorus. So far, it is wham, bam, thank you mam with these first three tracks.

Then we get to one of the coolest songs on the album, “Never the Heroes”. This might be one of my favorites. Their foot comes off the gas with this one and we get a pure melodic blissful song. It shows the softer side of Priest and Halford’s vocals deliver nothing but greatness. Usually with the pounding drums and guitar, I tend to miss out on Ian’s bass playing, but this one has that deep, low sound that helps take this one up a notch. But it is the layers of vocals and the harmonies it creates on the chorus that takes it over the top. This is a solid hard rock song and a nice time to change the pacing of the album.

The band goes back to being evil with “Necromancer”. In what seems more death metal than anything else they’ve done the song bleeds sinister nastiness especially in Halford’s delivery and mix that with the music, you have a throwback to ‘Painkiller’ and yet still sounds like today. The best of both worlds and another favorite of mine.

Priest doesn’t let up on the evil with “Children of the Sun”. The ever powerful drumming of Travis is another example of his greatness and why he has lasted so long in the band. What a powerhouse. The song starts off heavy and then goes in to an almost acoustic break in the middle before ramping back up. Halford sounds so tortured in his vocals setting the mood of the song. Then we get another dual guitar solo which is what we always want so Priest deliver again.

The second half of the album kicks off with an instrumental piece called “Guardians”. It is a short piano interlude that keeps getting bigger and bigger until it explodes in to the next track “Rising from the Ruins”. The song feels epic in size, style and delivery and even anthemic. And by the time it hits that chorus, you are on board for the trip and enjoying every minute of it. And every time there is a dual guitar solo with Tipton and Faulkner, I am engrossed in to the song as it doesn’t get much better than that.

Then the band goes a little old school with some cool groove rocking with “Flame Thrower”. This could fit on British Steel. This is straight up rock & roll and honestly, what else could you want. I like they are changing up the style a little so the album doesn’t get bogged down with same old, same old. They are keeping it interesting. Oh yeah, do I even need to mention the solo…no…you know that story by now.

The band goes back to the evil with “Spectre”. The evil never seems to be too far away with these guys. The darkness blows in and Rob goes back to his menacing and disturbing singing style. There is another speaking section with Rob and the song starts to feel like things we’ve already heard. I still like it, but it does have a little of that same old, same old, I just mentioned.

What starts off slow turns in to Priest doing Power Metal with “Traitor’s Gate”. It takes me back to early Priest maybe ‘Sin After Sin’ era. Halford sounds possessed with his intensity and is his lyrics come fast and furious. Oh yeah, guitars…that is all I need to say at this point!

“No Surrender” is on another old school rocker that romps and stomps and blasts through giving us a catchy song that clocks in at under 3 minutes and is perfect. It is short and sweet and too the point. Sometimes that is all you need.

The album is getting a little long in the tooth by the time you get to the song. “Lone Wolf” is an okay song, but surrounded by everything else you are starting to feel that we have enough at this point. There is nothing that jumps out at me with this one and I’ve listened to this album a lot.

The final track is finally upon us with “Sea of Red”. The song starts off with acoustic guitars and a slow ballady tempo. It already feels it is going to be epic and since it is the longest song on the album it kinda is. The song has a majesty to it and it feels like something off Rocka Rolla but still nestled in today’s music. The tempo builds and the song does pick up the pace and rock out. Halford delivers a fine vocal performance but at the end of the day, the song makes the album too long in my book. It has massive guitars and drums and I do like it all, but I think I would’ve preferred few songs overall. Longer and more songs is not always better.

The Track Score is 11 out of 13 Tracks or 85%. I don’t score short interludes which is why I show one less track than the track listing. Priest really delivered and I think shocked the world with how good this one really was. Faulkner has been a great add to the band and I believe has revitalized the old guard quite a bit. The band delivered a modern rock album with roots still firmly planted in the past and that is a hard thing to do. Halford hasn’t sound better and man, that Scott Travis is a beast on the drums. Glenn is still playing his heart out and understanding his limits which takes a man to admit that he has some now and he is willing to let Richie shine. And don’t forget Ian and his bass is still a driving force in keeping the band moving forward. Judas Priest prove that even after almost 50 years, they can still hang with the best of them. This was feared to be the last album and if it was, they would have gone out on a high note, but there is talk of a new one and some day that will come out and we will update the Series, but for now, this is the end and what a way to go out. My overall Score is a 4.5 out of 5.0 Stars as I thought this was brilliant. This was the first album I had heard in years and was part of the catalyst to making me dive in to Priest and do this series, so for that…cheers to ‘Firepower’.

UP NEXT: THE ALBUMS RANKED WORST TO FIRST