After ‘Done With Mirrors’, the band was not in a good place with fans, the label and themselves. The drugs use was real bad and it was time to sober up. First Steven got sober and then the rest of the band did and by 1986 they were ready for the next big thing. They needed a break. Something to get them back in the public eye. And it came in the most unexpected way.

The big break for Aerosmith came about because of Rick Rubin. Rick was working with Run DMC on their 1986 hit album, “Raising Hell”. Rick pulled out ‘Toys in the Attic’ and told Run DMC they should cover ‘Walk This Way’. Not a crazy thought as the band had free-styled over part of the song in their live shows anyway. They weren’t too keen on the idea at first, but Jam Master Jay was digging it.

But Run DMC wasn’t going to just sample the album. Why not get the band to come in and play and sing. So, a few calls were made, the band was convinced and Joe Perry and Steven Tyler went in to the studio to help out on the song. Joe played that famous riff and Steven sang the chorus and they even changed one line from “Give me a Kiss” to “Give me Head”…okay! Not what I was expecting.

END_OF_DOCUMENT_TOKEN_TO_BE_REPLACED 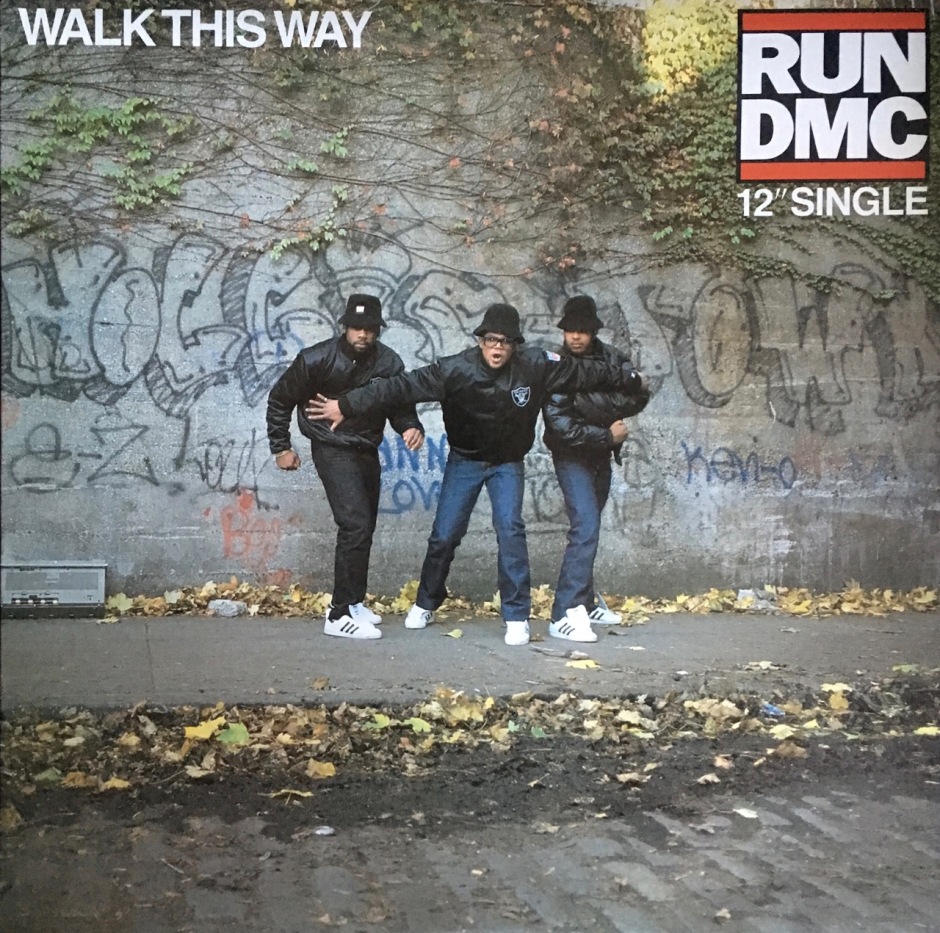 I came across this 12″ Single in someone’s collection I was buying and I knew I had to have it.  I am rocker at heart, but this hip hop version of a classic Aerosmith song is quite groundbreaking and I knew I needed it in my collection.  Mainly, because it adds to my Aerosmith collection as I don’t really have a Run DMC collection (until now I guess).

“Walk This Way” was released back in 1975 (and re-released in 1976) and reached #10 on the Billboard charts.  The song is off the band’s album “Toys in the Attic” (great album by the way, but that is for another day) and it is that producer Rick Rubin pulled out and played for Run DMC while they were recording their album “Raising Hell” back in 1986.  The band had sampled the song before, but didn’t know the song.  Rick suggested the band cover the song, but the band was not too keen on the idea except for Jam Master Jay.

The band recorded the song and even were able to get Steven Tyler to sing and Joe Perry to actually play on the track.  I said earlier it was a groundbreaking song and that was because it was really the first big hip hop & rock collaboration that crossed-over into the hip hop world and to the rock & pop world.  The song helped take hip hop and rap mainstream.

END_OF_DOCUMENT_TOKEN_TO_BE_REPLACED

Look what showed up a day early. I like getting the album before it is officially released. Shinedown’s ‘Planet Zero’ is ready for a spin.
Takara’s ‘Taste of Heaven’ with Jeff Scott Soto on vocals. Check out the review on 2loud2oldmusic.com.
Didn’t think I’d ever get one of these on vinyl! 25th Anniversary Edition of Greatest Kiss.
The LeBrain Train is proud to announce the upcoming interview with the super talented @jasonbieler. I will be joining @mikelebrain as co-host to talk Jason's new single "Sic Riff" plus the upcoming album as well as @saigonkickofficial and #Supertransatlantic plus the rest of his solo work. And maybe even the Soto/Bieler Shows. Don't miss the fun!
The vinyl and cassette finally showed up. The Def Leppard orders of Diamond Star Halos are now complete.
@defleppard the Diamond Star Halos Japanese CD Editions have arrived. 2 different bonus tracks on each one. Plus came with 2 stickers.