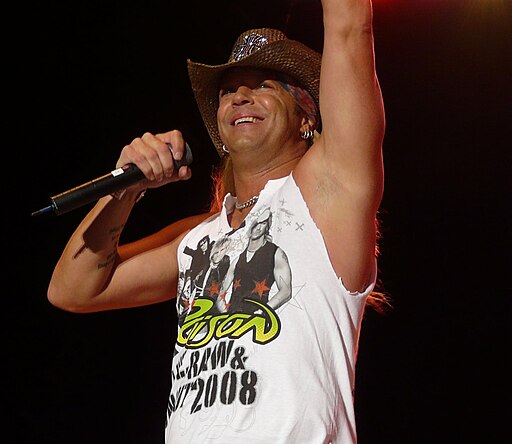 It didn’t start out this way as his first 2 solo albums were pretty much all original/new material.  His first solo album in 1998 was ‘A Letter from Death Row’ which was the soundtrack to a movie he wrote, directed and starred in, believe it or not.  On a side note, I never saw the movie.  Here is the track listing:

So far so good (well not really, the album actually sucks).  I don’t recognize any of these songs as Poison songs so that is a good thing.  Now, his second solo album ‘Songs of Life’ was released in 2003. Here is the track listing:

Oops, there is one track, “Party Rock Band” that is off his first album.  So, he couldn’t make it 2 albums without repeating a song.  That isn’t too bad as a lot of artist will add a live version or remix of a song from their previous album as a bonus.  Maybe we will get lucky on the third album ‘Freedom of Sound’ which came out in 2005.  Here is that track listing:

Oh my goodness.  He now has 8 songs repeated from previous albums or Poison songs.  Yes, some might be reworked but it is still a repeat of older material.  The good news is there are 11 songs not repeated.  That is a full album’s worth of new material so why add the rehash of older material.  We will give it another try with his 2010 release ‘Custom Built’.  Here is the track listing:

Not only do we have 5 repeats from older albums, we have 3 alternate versions of songs already on the album and “What I Got” is a cover at that and we get it twice!!  WTF??? Okay, Okay, enough already.  The next album will be all new material!!  His fifth album came out in 2013 called ‘Jammin’ with Friends’.  This track lists boasts 20 songs…awesome…right?  See for yourself…

This album contains 8 newly records covers of Poison & Bret Michaels songs, 6 songs from previous albums, 2 new covers and only 4 original songs…only 4 out of 20!!!  Holy Crap man can you stop rehashing old material and give us all new songs????  It that f’in’ possible???

Thank you for putting up with this rant as I needed to get that off my chest.

As a bonus, here are 2 of his most repeated songs “Raine” and “Driven”: