I have seen a lot of news on Poison lately.  Most notably, they are touring with Def Leppard and they were actually in town back on April 29th with Extreme & Jackyl.  I hate I missed it as I really would have loved to see Extreme…and Poison too!!

I then saw in the news where Rikki Rocket would love to record a new album, but he doesn’t feel fans want to hear anything new from them.  I then saw somewhere where Bret Michaels would love to do a new version of “Every Rose Has It’s Thorn”…but of course he would…he is a REPEAT OFFENDER!!

All this talk about Poison got me to thinking about their albums.  So, over the last week I revisited their entire collection and decided I would rank their albums from their absolute worst to their very best…or at least my opinion of that ranking.  They had 7 studio albums, but since one Live album had 5 new tracks I decided to include that one in the list as well. I will shut up now and get on with the ranking.

This was the band’s sixth studio album and the first full studio album with the original line-up since their ‘Flesh & Blood’ album.  The album songs seem to mainly reflect on the impact of fame in Hollywood and to be honest, who cares.  This is by far, their absolutely worst album.  There are no redeeming qualities or songs that could save his album.  The mixing, the sound, the vocals and the whole production value sounds like I would have done it in my garage.  This is not the quality a band that has been around for almost 20 years should be releasing it. Someone should have stopped this release.

It is no wonder Rikki thinks no one wants to hear new music if this is what we are going to get. What is even worse is how much they butcher The Who song “Squeeze Box”.  And the song “Wishful Thinkin'” is completely ripping off Nirvana’s “Smells Like Teen Spirit” with opening guitar riffs.  There might be some good songs on here, but as I said the production value kills any hope of knowing which ones those are.  I have been a fan since the beginning, but can’t support this album at all. 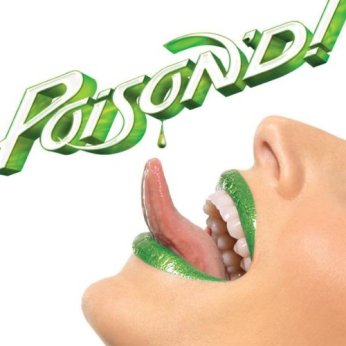 After the disaster of ‘Hollyweird’, someone came up with the bright idea of doing a covers album.  It has nine newly recorded covers and five that they had previously released.  Now, my opinion on covers album are simple…covers album should be changed in some way to make them your own.  In this case, they need to sound like Poison songs.  Also, don’t do covers of iconic songs unless you have something new to add, otherwise it is bad karaoke.  Sadly, that is what you get with this album…bad karaoke.

The album is better than ‘Hollyweird” even though it does have “Squeeze Box” from that album.  I can live with “Little Willy” and they get an A for effort on even attempting “Sexyback” by Justin Timberlake.  Otherwise, it is really an unforgettable release of covers. 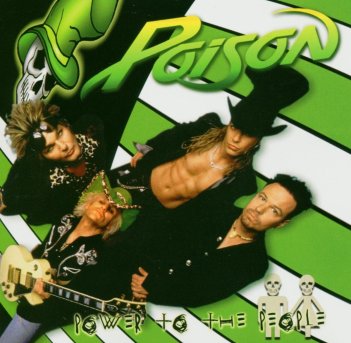 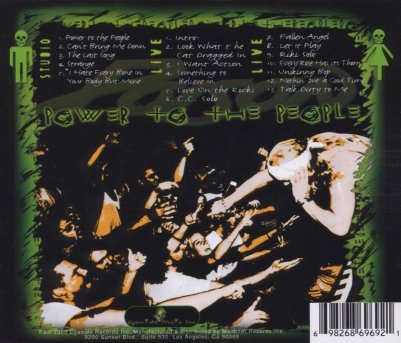 In 2000, the band was going to release another live album, but thankfully decided to throw some studio tracks into the mix.  The album has one song that is the best thing they have done since ‘Native Tongue’.  That song was the title track, “Power to the People”.  It is such a modern rock song and quite possible the heaviest song they have ever done.  The song alone is why I included this in the list as it is by far better than anything on the the two previously mentioned albums.  This was a direction I could have gotten behind and I think a lot of people could have supported.  Another stand out had C.C. DeVille on vocals, “I Hate Every Bone In Your Body But Mine”.  The 5 studio songs were definitely worth picking up this album, plus you get a great set of Live songs that has all the hits. 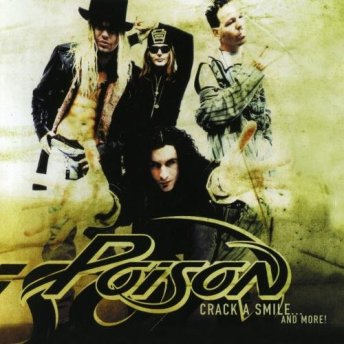 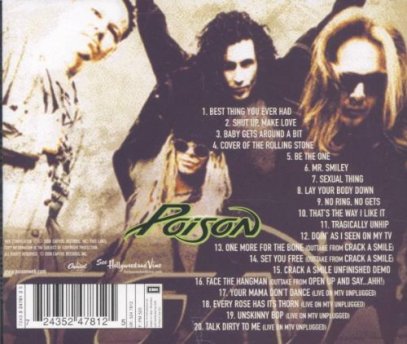 This album has a long history.  It was actually started in 1994 and includes guitarist, Blues Saraceno, who was hired after Richie Kotzen was fired for various unsavory reasons.  The album had to be put on hold after Bret wrecked his Ferrari and was injured.  By the time they got back to recording, the record company decided to release a greatest hits album so this was put on hold.  The album was finally released due to pure fan demand and a bunch of tracks were added to please the fans.

The album sound is a mixture of old school Poison and some of the grittiness of ‘Native Tongue’.  It is a solid album with numerous standouts including “Shut Up, Make Love”, “Best Thing You Ever Had”, “Be The One” and “Doin’ As I Seen on My TV”.  The album includes two new songs that were released on the greatest hits, “Sexual Thing” and “Lay Your Body Down”.  It has a few demos and several tracks from their MTV Unplugged set. This is a must have for any Poison fan if you don’t have it. 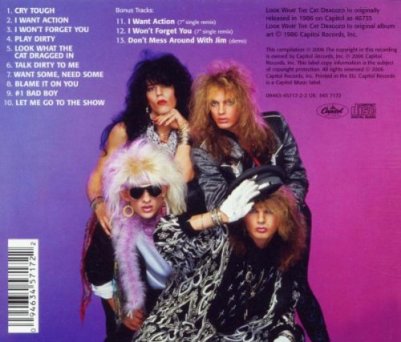 The album that started it all.  It might be their first, but it ain’t their best either.  Some of the songs don’t hold up, but the ones that do are really sensational.  The glammed up look was huge and they were the epitome of what everyone hated about the genre; however, they were a lot of fun and the songs were pretty damn catchy.  Classics such as “Talk Dirty To Me”, “Cry Tough”, “I Want Action” and the title track made Poison a household name.  “C.C. Pick Up That Guitar Baby…Talk To Me” was so memorable to me for some reason and can still picture it in the video.  The only reason it isn’t higher is the songs were not as polished as the later albums would become.  The album was over 3x Platinum in the U.S. and I have my copy on tape and CD.Now go get yours.

Now the big question came was if Poison could successfully follow-up ‘Look What the Cat Dragged In’ and boy did they ever.  The first single, “Nothin’ But a Good Time” proved there was no sophomore slump.  A couple of their biggest hits also came from this album including “Fallen Angel” and “Every Rose Has It’s Thorn” which was their only #1 single.  The album peaked at #2 on Billboard 200.  I had a couple of other favorites on the album which were “Love On The Rocks” and “Back to the Rocking Horse”.  Interesting factoid I saw on Wikipedia was that Paul Stanley from Kiss was supposed to produce the album, but was unable due to schedule conflicts.  That would have been interesting and probably quite different than what we got with this one.

I was really torn between this one as my Number 1 album and the one I actually chose.  Both are incredible, but ultimately I ended up with ‘Native Tongue’ as my #2 album for Poison.  Ask me again next year and this one might be #1.  I go back and forth.

The was the band’s fourth album and the first with new (and short lived) member, Richie Kotzen.  Richie is one of my favorite guitarists out there and he was young here when they got him at only 23.  Richie brought a whole new level of song writing and maturity the band had never really seen.  The bands sound had a new bluesy tone to it that wasn’t thre before thanks to Richie.  There is no denying his influence in that band right out of the gate.

There are so many great songs on this album including “The Scream”, “Stand”, “Stay Alive”, “Until You Suffer Some (Fire & Ice)”, “Theatre of the Soul” and should I go on because I could.  I think this is definitely the pinnacle of their song writing and the most mature album they have ever done.  This album brought them the respect they deserved. Too bad Richie went and slept with Rikki’s wife or this could have been the beginning of a beautiful relationship (I think that is the story for why he left or was fired).

Yes, my #1 is ‘Flesh & Blood’  There are many reasons, but what tipped the scale over ‘Native Tongue’ was thinking back to which album I gravitated to first when I wanted to listen to a Poison album and this was it.  It also has more listens than all the other ones.  The band became a full mature band on ‘Native Tongue’, but that maturity started to come out on this album.  To add to it, this was the last decent album the band did with C.C. in the fold as you saw from my earlier comments, the later ones don’t cut the mustard.

The album at times had a darker tone to it especially with my favorite song by Poison, “Something to Believe In”.  The piano opening helped set the tone and the lyrics was definitely a dark look at the world.  Other darker toned songs were “Valley of Lost Souls” and “Life Loves a Tragedy”.

The band still hadn’t abandoned their fun side with the classic songs “Unskinny Bop” and “(Flesh & Blood) Sacrifice”.  A couple other favorites are “Life Goes On” and “Ride the Wind”.  There was a great mixture of songs and something for everyone on this album.  All these songs and more make it the best overall Poison album for me.  Check it out for yourself.

There you have it.  My Ranking of the Poison Albums.  Let me know if you agree, disagree or have no opinion. I hope you enjoyed the breakdown.  If you want to pick up one of the albums on iTunes, just click below…

16 thoughts on “Poison – The Albums Ranked Worst to First”