With Maroon 5 heading out for their next big tour this Summer, I thought I might go through and rank their albums from Worst to First.  With a span of 6 albums over 16 years, they have put out some great albums and a couple not so great ones.  I am going to keep this strictly to Maroon 5’s studio albums and not include any from them when they were known as Kara’s Flowers or any live or re-mix albums.  This will keep it simpler and keep me sane from digging into everything else that is out there.

Now, take a seat and lean back and read on and find out how I rank the Maroon 5 albums from Worst to First.  And of course, we will start with the Worst… 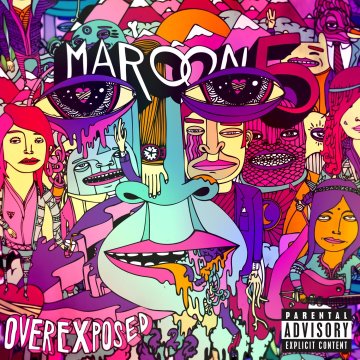 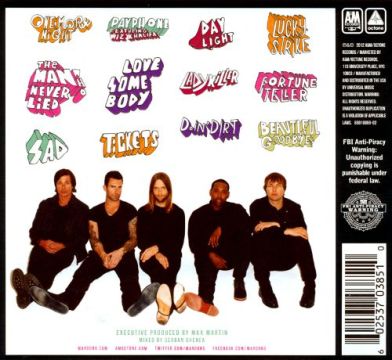 ‘Overexposed’ was the band’s fourth album and the title pretty much sums up Adam Levine during this time.  He was everywhere.  With the success of his judging stint on ‘The Voice’, Adam became so overexposed and I tired of him quickly.  The album was their most Pop album at the time (yes, even more so than the previous two).  They brought in so many outside people including Max Martin and even Ryan Tedder of OneRepublic and it seemed like a giant effort to match the sound of time rather than be who they really are.

The album did spur 4 singles “Daylight”,  “Payphone”, “One More Night” and “Love Somebody” and it sold over 2 million copies.  When you sit back and listen to it again, honestly, outside of the singles, there is nothing memorable.  And to top it off, it was the first album they had done that didn’t feature keyboardist, Jessse Carmichael which changed the dynamics a little.  I think the album was too much an impact of “The Voice” and the success of their last single off Hands Over Me, “Moves Like Jagger”.  There is one gem on it…”Sad”…a really great ballad. 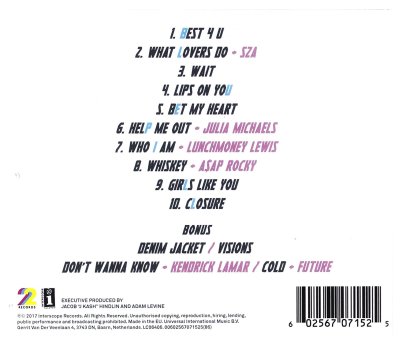 If you thought “Overexposed” was pop, than this is pop music today.  They had to have hip hop collaborations (6 I think), tons of electronic sounds and I am not sure if there was a guitar anywhere to be found (there was, just not much).  I did a full review of ‘Red Pill Blues’ if you want to read it (just click the name).  I hated the album on first listen, but it got better over time.  Now going back and listening it and comparing to the others, it doesn’t hold up as well.

Now, the album cover is pure shit.  I am sorry, but who that this was a good idea.  This album should put this as the worst album of the band.  It is the poorest selling album of the bunch and only had 2 singles, “Wait” and “What Lovers Do”.  However, there are some real shining highlights including one of my favorite Maroon 5 songs “Lips On You”.  You have “.  What puts it over from being the worst is the Deluxe Edition.  It contains two of the promotional singles released prior to its release, “Don’t Wanna Know” and “Cold” and then you have a really cool track called “Denim Jacket” that is worth checking out.  This albums non-single tracks were the saving grace for me. 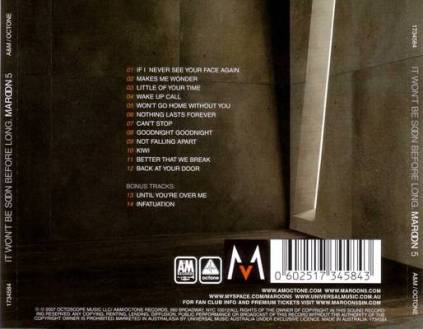 The follow-up to “Songs About Jane” saw the band change up their sound from the debut and had them go a little retro and a little more electronic.  They showed some of their influences including Prince and Michael Jackson.  At times, you could still hear a little of the sound from the first album which for me was important that they didn’t leave that completely behind.

The album spawned 5 singles with the last single, “Goodnight, Goodnight” being my favorite on the album as it could have fit on “Songs About Jane”.  The other singles, “Makes Me Wonder”, “Wake Up Call”, “If I Never See Your Face Again” and “Won’t Go Home Without You” helped make this a memorable album.  I would say my biggest complaint was there was some filler as the last half of the album was definitely weaker than the first half.

How could I not like this album.  The producer was none other than legendary producer, Robert John “Mutt” Lange who is famous for Shania Twain, Def Leppard and AC/DC to name just a few.  He really worked the band and the came out with a slightly different sound.  An unlike some of their albums, the non-singles were really just as great as the singles.  Songs like “Out of Goodbyes” with Lady Antebellum and the song “How” were even better than the hits from the album.  That is the sign of great album.

The album was -re-released in 2011 right before ‘The Voice’ started with Adam as a judge.  A single from the re-release was called “Moves Like Jagger” and had another “Voice” judge with Christina Aguilera and the timing was perfect as the song became a huge sensation and helped the album go on to even bigger things.  As good as it is, there are still two better.

After the disappointment of ‘Overexposed’ for me, Maroon 5 rebound quite nicely with this gem.  I don’t know why I connected with this one so much because it is a big pop album.  Now you did get a song with a harder, darker edge like “Animals” (that video was dark!!), but the rest were just damn fine, catchy pop tunes that stay with you.  With 5 Singles including “Maps” and the most successful song on the album “Sugar” (another great video, who wouldn’t want them popping up at your wedding).

The deep cuts were great as well including “Shoot Love”, “It Was Always You”, “Leaving California”and the Gwen Stefani guest appearance on “My Heart is Open” (which is another Voice judge…notice a pattern).  The album did go to #1 on Billboard and has gone on to sell over 3 million copies worldwide.  All in all, not bad to release something as good as this on your 5th album.  They still have it or at least than can still capture some magic. 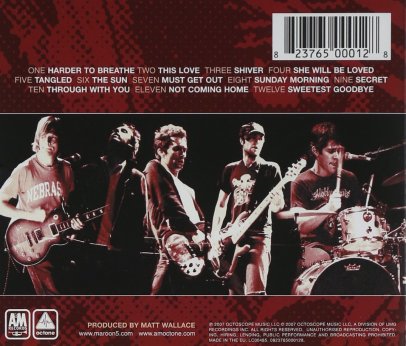 Yes, the #1 album is their debut ‘Songs About Jane’.  This album features a BAND, not an electronic focused group, but a real band of musicians.  They actually use the guitar, bass and some real drums.  They had a funk sound and groove that really brought a cohesive feel to the album.  Every song fit nicely together and they all followed a similar theme, they were all about a girl named Jane (or at least mention something about her in each song).

This was such a refreshing new sound that we didn’t have on the radio at the time.  They were unique and Adam’s falsetto was sick!  With songs like “Harder to Breathe”, “This Love”, “She Will Be Loved” and “Sunday Morning” you understand why the album sold over 10 million copies (and I think I have bought it twice…1 CD and 1 Vinyl).  The nice thing about when this album came out is that there was no ‘The Voice’ and you weren’t sick of Adam yet.  That would come later.

There you have it.  What order would you put the albums in?  I am sure we don’t completely agree. Thanks for reading and have a great day.  If there is an album you want to buy, just click on the link below and it will take you to the Maroon 5 store in iTunes.

13 thoughts on “Maroon 5 – The Albums Ranked Worst to First”