Ok, I am in no means an Alice Cooper aficionado, I am a casual fan at best.  However, I have always wanted to see Alice live, but never actually went.  Well, as I am getting older and so is Alice, I realized that we won’t be around much longer and I better go see him while I am still around and so is he.  So after my pal Deke went and wrote about it at Thunder Bay Arena Rock, he convinced me to finally do it.  And let me tell you, I am so glad I did.

Now, if you want better pictures go to Deke’s blog as he had front row I believe.  I wasn’t so lucky and I am too cheap!  But I did get pictures and they suck because my phone sucks.  So I apologize up front for that.

My wife decided to join me on this concert experience and I am glad she did as it made the night that much more special that she was with me.  Plus, it is nice any time we get a date night.  No kids!!!

Now my wife is a little height challenged so she had trouble seeing. Me, I am 6’2″ so I had only minor issues as the guy in front of me was a little taller than me.  But that is okay, I got to see most everything.  Okay enough about that, let’s get to the show.

The show opened with Alice’s voice welcomes you to the nightmare and the band comes exploding out with “Brutal Planet” which was such a great opening song and there was no holding back.  Alice comes strolling out with this coat and cane and never has a 70 year old man looked so cool!!  He owns the stage and has such presence that you are completely drawn to him.  And the way he swings that cane around, those band members better not be standing close or they will get knocked on their ass.  Hell, Alice swung the cane so hard against a speaker that the damn cane broke.

The band rips through such classic songs as “No More, Mr. Nice Guy”, “Under My Wheels” and “Billion Dollar Babies” and I think my voice was starting to hurt since I can’t sing for shit.  And can we talk about the band for a minute?  Damn!!!!  These guys and gals were awesome, but Alice only surrounds himself with the best.  Here is his band…

That is right, 3 guitarists and what power it added to the whole show.  I now want all bands to have 3 guitarists. Ryan got a ton of solos during the songs and was front and center a lot.  Coop as always, graciously showcases each and every musician as they all got time up front in the spotlight both by themselves and standing with Alice himself.

Nita got her own solo slot and let me tell you she was fantastic.  As a dad of two girls, it is nice to see a woman in a male dominated field to be the star attraction.  My wife thought she was amazing as well.  Glen Sobel also got his own drum solo and it started off with him and Chuck laying down a mean bass line before Glen destroyed the crowd with his pounding drums.

This isn’t a backing band, this is the Alice Cooper Band!!

I had told my wife that it was more of a show than a concert, but really it was more a concert than a show.  Alice doesn’t chat in between songs and they just move from one hit to another and since there is no opening act and it is just Alice, he gives you as much music as he can cram in for his 1:45 minute set.  It was solid hit after hit.

The “show” part did finally start once we got to “Feed My Frankenstein” and it was everything I had heard about.  Alice comes out in his bloody doctor’s coat…

Alice has the monster machine come out and he turns himself into the giant Frankenstein.  The 12 foot or so giant makes his appearance and walks across the stage in all his glory. 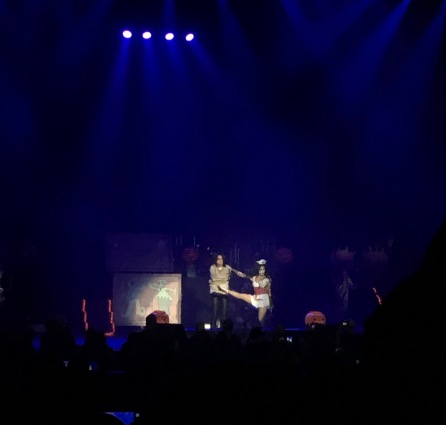 And once the head is off, the reaper carries his head around the stage…

It was all so awesome.  I felt like a kid again as I was enjoying it all so much…maybe a little too much.  The only thing that was missing from the show was the snake.  Alice didn’t carry around a snake as he had done long ago.

Let’s not forget about Alice.  Alice is still on the top of his game.  When he is in character, man, he stays in character.  He sounded great as well.  The young artist should take notice, this is how you control a crowd.

The man also had more coat changes than Cher has costume changes in her show.  Practically a different coat for each song.  Each one given to him by some crazy woman in a box.  The best coat is the white top hat and the white tuxedo coat with tails.  And on the back of the jacket was the Carolina Panthers Logo.

The whole evening was sensational and I night to remember.  One of my favorite shows this year and heck, the last couple years.  Alice Cooper lived up to and exceeded all expectations.

And with all the balloons bouncing around, Alice was carrying a knife and popping them anytime they came close to him until finally they were all gone.  The show ended with “School’s Out” with Pink Floyd’s “Another Brick In the Wall” mixed in.  The last song might be the only song my wife actually knew, but she seemed to enjoy all that was going on and the last handful of songs had a lot going on.  Plus, I think she enjoyed the fact I was having such a good time.

And there you have it.  My first Alice Cooper show experience.  And would I do it again…Hell YES!!!  Thanks Deke for giving me that final push.

A couple more pictures for you…