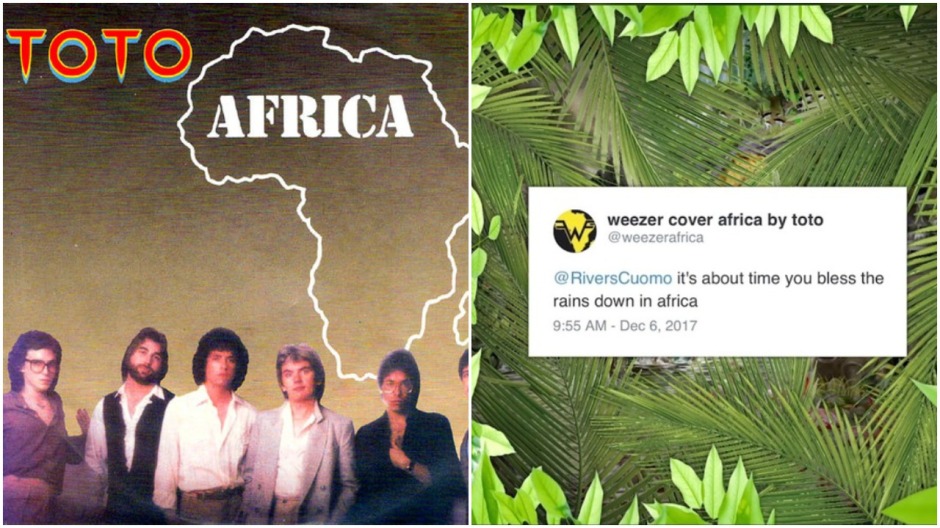 For this version of The Original Vs. The Cover, we are covering a fairly new cover of the song Africa by Weezer compared to the original by Toto.  The Weezer cover has brought Weezer back in to the news, but it has also brought the band Toto to a whole new generation of music lovers which is always a good thing.

The song was written by David Paich and Jeff Pocaro of the band Toto and released back in 1982.  David came up with the song after watching a documentary about all the suffering in Africa.  It moved him, but so did the pictures of such a beautiful continent.  The song is a love song, but love for a place and not an actual romance.  The song did really well for the band and hit #1 on the US Billboard Hot 100 chart and #3 in the UK.

David Paich wrote the song on his synthesizers and all the marimba and other African beat sounds came from that keyboard.  The basic drums and conga were played by David and Lenny Castro until they found that right rhythm that ended up on the song.  Vocally it is David on the main verses and Bobby Kimball on all the choruses with backing vocals by The Eagles, Timothy B. Schmit.

The contagious beats and that great keyboard solo towards the end also aide in the beauty of the song. They hypnotic lyrical delivery is so peaceful and beautiful that you can’t help but get swept up into the song.  The chorus explodes on you and you immediately join right in and sing along.  All this have helped this song remain popular even today and whole new generations now know who Toto is and maybe a new found respect.

Weezer didn’t stray too much from the original song.  They kept the heart and soul of the song, but added a bit more guitar.  Rivers Coumo’s vocals had that same hypnotic feel to it and he kept the tone and attitude reminiscent of the original song as well.  They also kept the little keyboard solo towards the end.

The only thing missing were the great backing vocals in the chorus.  The Weezer version did not have the same punch and charm.  What Toto could do with the two vocalists, Weezer was not able to match and that took away a little from the song.

Now both versions are really great in their own right, but as I said above, the vocals in the chorus is where the Weezer version falls short.  It is hard to match Bobby’s style and sound.  Toto’s version had a little more gusto and warmth to it and theirs is a little more memorable.  Weezer did a great cover, but nothing beats the original on this one for me.  The best thing out of it is that more people now know Toto.

Let me know which version you like the best and why.  Feel free to leave a comment and talk about the song and tell me how right or wrong I am on this one.  Thanks for stopping by and have a great day.

I hear the drums echoing tonight
But she hears only whispers of some quiet conversation
She’s coming in twelve-thirty flight
Her moonlit wings reflect the stars that guide me towards salvationI stopped an old man along the way
Hoping to find some old forgotten words or ancient melodies
He turned to me as if to say
“Hurry, boy, it’s waiting there for you”It’s gonna take a lot to drag me away from you
There’s nothing that a hundred men or more could ever do
I bless the rains down in Africa
Gonna take some time to do the things we never hadThe wild dogs cry out in the night
As they grow restless longing for some solitary company
I know that I must do what’s right
Sure as Kilimanjaro rises like Olympus above the SerengetiI seek to cure what’s deep inside
Frightened of this thing that I’ve become

“Hurry, boy, she’s waiting there for you”