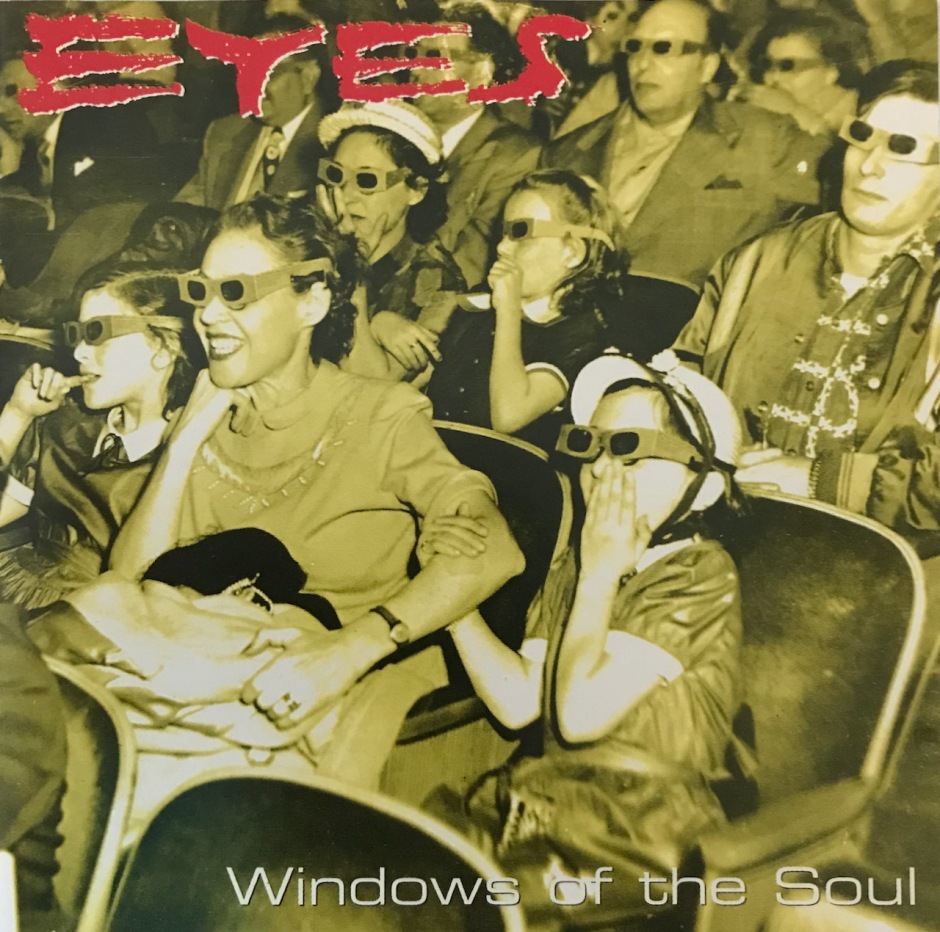 The debut Eyes album didn’t do very well. The band was stalling and Jeff Scott Soto started writing with George Bernhardt for a new band he was in called Slam as Jeff wasn’t happy with the direction the band was going. He eventually had enough and left the band. Then suddenly just two years after the Eyes debut, ‘Windows of the Soul’ was released and Jeff was never told nor did he ever agree to its release. To say he was pissed would be an understatement. The reason for its release was due to Jeff’s popularity in Europe had been on the rise and the record company wanted to take advantage of it.

Is it really a new album? No, not really. All it is are the demos and original tracks Eyes had done and submitted to their label for the first Eyes album. The label wasn’t happy with them so they went back and re-recorded the album and cut some new songs. The record company might not have thought them good to begin with, but still decided to package up the demos into an album that came out in 1993 only in Scandinavia which is the version I have as you can see the 1993 on the back cover. The album was released elsewhere in Europe in 1994. The band on this record included Aldy Damian, Steve Dougherty and Jeff Scott Soto. The band didn’t have a bass player so on the demos were Chuck Wright (Guiffria) and Mike Porcaro. On keyboards you get either Jeff Naideau or Todd Jasmin. Out of the 10 songs, only three of these were on the debut and the demos are pretty great in their own right. Let’s get to the music.

The opening track, “Cheyenne”, kicked off with a few licks on the guitar then immediately followed by drums, bass and keyboards. The song is very melodic and Jeff’s vocals soar and are so smooth. It is a catchy number and has a nice little guitar solo. It isn’t a rocker, closer to ballad and truly showcases the softness in Soto’s vocals.

“City Nights” comes crashing in then goes quickly to a slower tempo with a really great bass groove. It has a nice bridge if you would call it that, but not much of a chorus and not memorable at all. The bass work on it is great though, the rest is a little boring. Jeff’s vocals take off towards the end and he really gets in to it and make the song more interesting. The guitar solo is great, but the song feels unfinished and incomplete and just needed a little more work to bring it to the next level.

Next up is a cover of Gary Wright’s 1976 hit “Love is Alive” and Eyes’ version sounds entrenched in the 80’s with the keyboards and the song feels so dated. However, being that it was already a good song, it isn’t bad here at all. It is catchy and has some great vocals, but the keyboards are a little much. Steve’s guitar work on it is fantastic with some great riffs and a solo that keeps with that 80’s sound.

Then we get a ballad with “Way Back Home”. It is a very soulful track with an atmospheric opening and a slow groove with mini guitar solo up front. Jeff’s vocals are soft, emotive and oh so smooth. Jeff loves R&B and soul so this is right in his wheelhouse. A great song and ballad. If this was released back when it was submitted it could’ve been a good radio track.

“Living on the Edge” opens with some massive drumming by Aldy but it is tedious and repetitive and after awhile very annoying. The song overall sounds really dated and not something that would come out in the 90’s. It is very a pop oriented rocker, more 80’s vibe but not much heavy. I’m beginning to see why the label rejected these songs when the were submitted. The actual debut album came out so much better and goes to show you sometimes the label is right.

With more of those dated keyboards I’m beginning to think their intention was more new wave than rock. “Love Lies” is a another ballad and has its moment where some power is added but not much. Jeff sings like it is a ballad but it is lacking some heart and soul. The backing vocals are a little cheesy and nothing to write home about. It just needs more work.

“Don’t Turn Around” is a cover of the Tina Turner song written by Diane Warren and Albert Hammond and also covered by Aswad and Ace of Base. It is an interesting take as it has Soto opening with an a cappella vocal before we get some keyboards. Soto is so soulful and really captures the essence of the song. It really showcases his true vocal ability which is second-to-none. When the full band finally comes in they add the power in to power ballad. This is definitely an album highlight. In my humble opinion, might be the best cover of the song…EVER! This version isn’t dramatically different than what was on the debut album. The opening still is Jeff doing mostly a cappella but there is a little spoken verse at the beginning that is not on the original. Still a great song.

Another track on the debut album is “Walking Fire”, but it was “Walkin’ Fire”…huge difference. The song on the debut has Jeff calling out Steve during the opening, but that doesn’t happen here. Also, there is some banter around 3 minute mark on both songs and they are very different. I thought the song was filler on the first album and only gave it a 1/2 Point when compared to the other songs on the album. Now though, it is one of the better songs on the album. Perspective. It is a total rocker and Jeff goes a little tougher on the vocal deliver which fits the song well. The difference between the first batch of songs on here and this production wise is dramatic.

The big ballad on the debut was “Nobody Said It Was Easy” and it opened with a piano accompaniment but this time it is more dramatic, more pronounced and plain better. They toned it down on the debut. The song is longer by around a minute and the song doesn’t suffer for it either. A good ballad is a good ballad. Part of me might like this one a little more musically, but Jeff’s vocals on the original might work better. And Yes, it is still cheesy, but in such a good way.

The final track is “It’s All Over” which is an apt title because by this time, for Jeff it was over. There is some studio horseplay at the beginning and then Steve rips some riffs on the guitar. They end the album with a rocker. It has a big chorus that really grabs you and would be great live. It is a good way to go out and to go out with the best guitar solo on the album is even better.

The Track Score is 7.5 out of 10 or 75%, but the album isn’t really quite as good as that score would seem.  It isn’t far off though.  I do enjoy most of the songs, but production wise and quality of the first half of the album is a little suspect.  When you get to the 3 songs that were on the debut album, it is obvious the quality of those other songs is lacking and especially considering a song I thought was only ok on the debut I think is stellar here.  That is an issue.  My Overall Score is a 3.0 out of 5.0 Stars because it still deserves a passing grade as I do like it and will listen to this again. If you are a Soto fan, it is worth buying no doubt.  If not, still get it, just don’t need to rush out and get it.