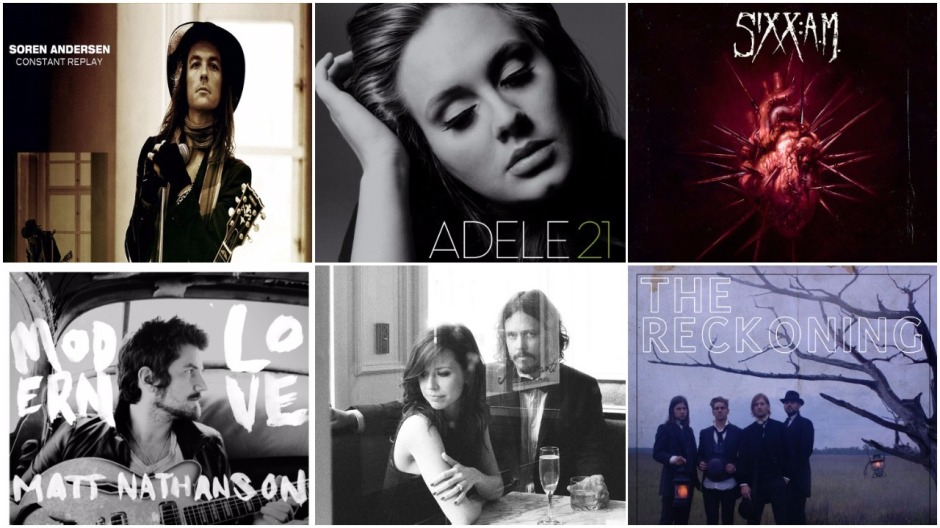 To continue my Throwback Thursday of the last two weeks, here are my Favorite albums of 2011 (in no particular order):

Soren Andersen – Constant Replay:  This is an incredible debut album.  The album name is accurate as it was on constant replay back when I got it.  There are so many great songs and no fillers.  I just love “Song About You”, “Black Lady”, “Lavender in My Calendar” and “Cold Shock”.   Soren has toured as the lead guitarist in the Glenn Hughes Band and played on numerous albums including Mike Tramp.  Put it on and enjoy the ride.

Adele – 21:  This album was the top selling album of 2011 and there was a reason why.  It was and is amazing. Her voice is so powerful and it is so mature for such a young artist.  She is so far beyond her peers with her vocal ability.  Too many great songs to mention, but I will name a few – “Rolling in the Deep”, “Rumor Has It” and “Someone Like You”.

Needtobreathe – The Reckoning:  This is one of my all time favorite bands.  I can never get enough of their music.  I have only seen them in concert about 3 times and each time they get better.  This is another spectacular album.  Some stand outs on this album are “Oohs and Aahs”, “Drive All Night”, “Keep Your Eyes Open”, and “Angel at my Door”.  If you listen to this album, be prepared to go get their entire catalog afterwards.

The Civil Wars – Barton Hollow:  I have to thank my Niece, Alyson, for this one.  The Civil Wars are so different than what are my normal listening choices.  When they sing, you can just feel everything they are feeling and more.  The emotion they put in their vocals is amazing.  They play on Country stations, but I think they are so unique that you can’t classify them in an category.  Too bad they have broken up since then.  Highly recommend if you are looking for a change of pace.  I enjoy “Poison & Wine”, “To Whom it May Concern”, “C’est La Mort” and “20 Years”.

Sixx A.M. – This is Gonna Hurt:  This is Nikki Sixx’s band when he is not doing Motley Crue which is all the time now.  Their first album was a surprise smash in my opinion.  I didn’t know what to expect and I enjoyed it so much I was hoping it would continue.  Thankfully it did and it picks up right where the last one left off.  Another Rock & Roll smash.  I love the songs “This is Gonna Hurt”, “Lies of the Beautiful People” and “Live Forever”.

Adelitas Way – Home School Valedictorian:  Straight up Rock Album and just as good as the first.  With songs like “Sick”, “Cage the Beast” and “I Wanna Be” I couldn’t turn it off and I would just hope I wouldn’t get pulled over for speeding if I was listening to it in the car.  And they even do great rock ballads like “Alive” and “Good Enough”.  They give me hope that Rock won’t die out any time soon.

Britney Spears – Femme Fatale:  Okay, I know I will catch grief for this one, but it was really good.  I am glad to see her put out a pretty decent Pop/Dance album.  There are some good dance songs on here like “I Wannt Go” and “Til the World Ends”.  I enjoyed “(Drop Dead) Beautiful”, “Criminal”, “Gasoline” and “Seal It With a Kiss”.  I know if we were back in 2011 and I was in a Miller Lite commercial this would be strike one on losing my Man Card.

Kelly Clarkson – Stonger (Deluxe Edition):  This a strong album from Kelly Clarkson.  In my opinion, one of her best.  She is also probably my favorite American Idol winner.  There are some great songs including “Stronger”, “Mr. Know it All” and “Dark Side”.  I picked the deluxe edition for the reason as my brother-in-law co-wrote the song “Alone” that shows up only on the deluxe edition.  And I am not being biased, but that is also one of my favorite songs on the album.  I am glad to see Kelly doing the type of songs she does best.

Parachute – The Way It Is: I saw these guys at the Star 94 Jingle Jam and I was impressed.  I already enjoyed their album but this gave me a new look at them and I was impressed.  Another Pop album on my list but it was good Pop.  I enjoyed “Forever and Always”, “Philadelphia”, “Kiss Me Slowly” and my favorite was “What I Know” (a catchy little tune).  They have a nice light sound and are great when I am not in the mood for any thing heavy.

Matt Nathanson – Modern Love: Matt Nathanson is one of my favorite singer/songwriters and he doesn’t disappoint.  Check out my artist profile on him here.  Matt has a great sound and he is hilarious in concert. He is a real artist.  The songs to check out are “Modern Love”, “Faster”, “Room at the End of the World”, “Kiss Quick” and the incredible song “Run” which is a duet with Jennifer Nettles.  Might be my favorite song of that year.

Miranda Lambert – Four the Record: Beautiful and can sing…what more do you want.

Night Ranger – Somewhere in California:  Yes, Night Ranger was BACK!!!  It is great to see a band from the 80’s put out such a great album.  It has the classic 80’s Night Ranger sound and I couldn’t be happier.

The Poodles – Performocracy: Great band with a throwback sound from when I grew up. “I Want It All” and “Bring Back the Night” top choices.

Manraze – Punkfunkrootsrock: Phil Collen from Def Leppard in his side project. This is their 2nd album and it has a variety of sounds (heck the album title tells you what sounds you will get). Love it!

Emphatic – Damage: Check out the song “Bounce”. You will love it! The rest of the album is great too.

Atomsmash – Love Is In the Missile: “Do Her Wrong” is one of my favorite songs of the year. Just a fun, dirty rock song.

Red – Until We Have Faces: A hard rocking Christian band. Love the songs “Feed the Machines” and “Faceless”

Rev Theory – Justice: I heard the title song “Justice” and was blown away. Just a hard driving rock song.

Gavin DeGraw – Sweeter: I really enjoyed this album, especially the first single “Not Over You”.  Also liked “Candy” and “Sweeter”.  Saw him concert this past year opening for Shania Twain.  He was awesome live.

Mat Kearney – Young Love: This an artist I didn’t like when I first heard his stuff, but I took the extra time to listen to it again and I discovered he is really talented. I enjoyed this 2nd album immensely “Ships In the Night”, “She Got the Honey” and “Hey Mama” are standouts.

Tommy Shaw – The Great Divide: Tommy, not sure what you were trying to do here. Did not like at all. Stick with Styx (pun intended).

Limp Bizkit – Gold Cobra: Really disappointed. I was able to here some rough cuts before it was released and it showed promised, but the final version of the songs came out weak. It was a major disappointment when I finally heard it.  Time to hang it up, maybe.