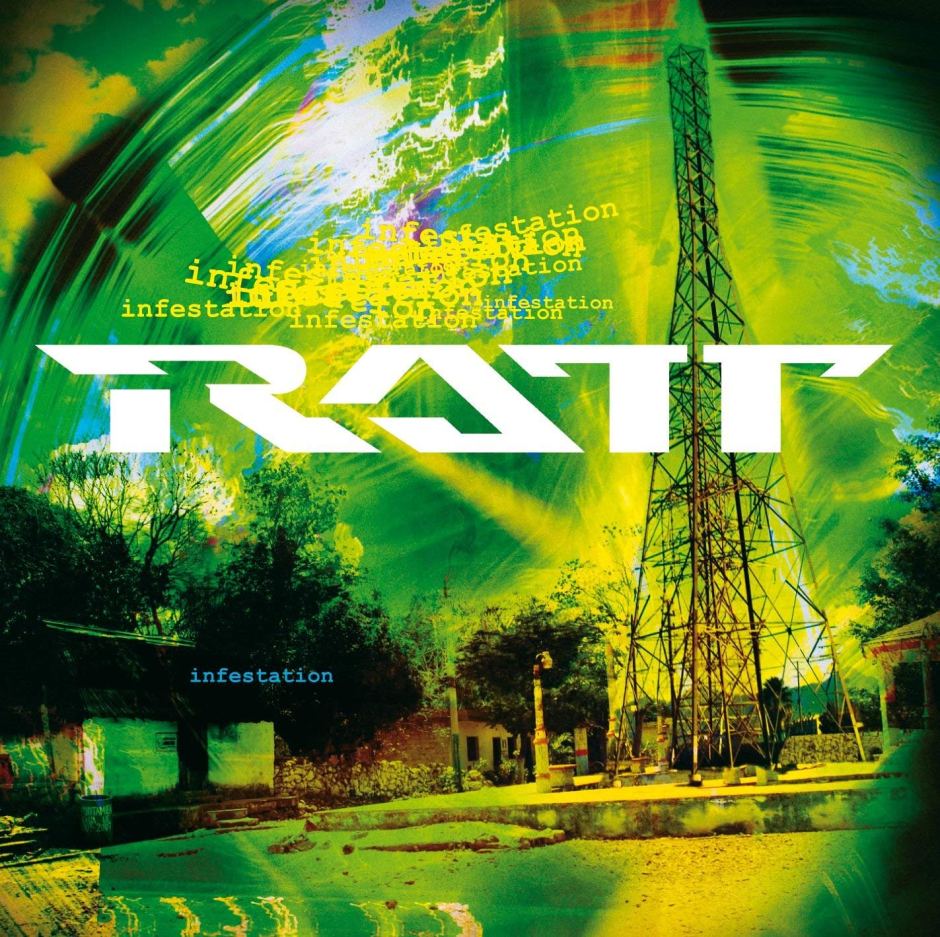 After the album ‘Ratt (1999), the band had a very troubled time.  Stephen Pearcy left the band (again) and started his own band that eventually tried to use the Ratt name, but the other members sued and won.  The remaining Ratt members continued on as a band…or at least made several attempts with many line-up changes.

In 2000, the current Ratt was Warren DeMartini, Bobby Blotzer, Robbie Crane, John Corabi (Motley Crue) and Robert Mason.  Robert was brought on as lead singer, but left shortly after when the band couldn’t get a major label deal.  That brought on Jizzy Pearl at lead vocals.  This would remain the band until at least 2006.

In 2002, the band and fans were delivered some bad news.  Original guitarist, Robbin Crosby, passed away from a Heroin overdose.  He had long battled  with addiction and it finally grabbed hold for good.  Robbin has also been battling HIV, but the drugs got to him first.  Any hopes of the original band getting back together were quickly dashed.

In 2006, Jizzy would leave and Stephen Pearcy rejoined the band.  Then 2 years later, John Corabi would leave and he was replaced by Carlos Carvazo from Quiet Riot.  The line-up was now complete for the next album…whew, that was exhausting.  Wait, where is Juan Croucier?  He was out doing his own thing.  He comes back to the band, but not for many years.

Finally, in April 2010, Ratt released their seventh studio album called ‘Infestation’.  It had been over 10 years since the last album and with all the line-up changes and the fact the last album was so bad, my expectations for this release were pretty low. 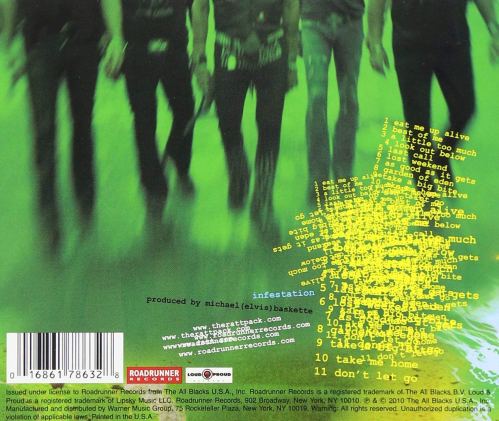 My complaints of the last album were production quality, outside songwriters and the fact the album was self-produced which is never a good thing.  In looking at this album, they seemed to listen.  The album was produced by someone other than Stephen Pearcy and Warren DeMartini.  It was produced by Micheal “Elvis” Baskette…Check.  No outside writers except for Baskette helping in the writing (which is okay as he is producer)…check.  And production quality…well…check, check and one more check as the production quality on this album was right up there with ‘Detonator’.  Fanfuckintastic!!

Now how did the album do on the charts you ask?  It actually did really great.  The band reached #30 in the US which is the highest chart position since 1990 with ‘Detonator’.  The band also hit #5 in Japan and charted in several countries (just not quite as high).  It looked like the band had a hit album on their hands and all was going well…at least it looked that way.

I also found an alternate copy of the cover that was red.  I need to make sure I get that copy some day.  It looked like this…(I think there is a blue one as well). 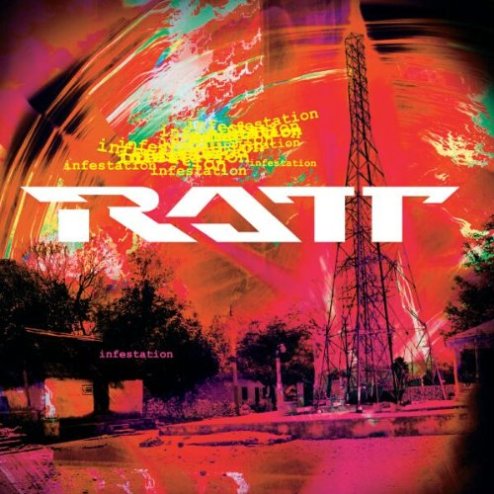 Okay, Okay…now let’s get to the music…
The opening track, “Eat Me Up Alive”, comes at you like a breath of fresh air.  Holy crap!!  This is classic sounding Ratt from ‘Out of the Cellar’ and ‘Invasion of Your Privacy’. The band is back to dual guitars and have gone out of their way to capture the magic that was 80’s Ratt and yet they did it without sounding dated.  The album’s production value is so good that it sounds fresh and new while still sounding like Ratt of old.

“Best of Me” was the first single and the first signs that Ratt was back and back with a vengeance. When I saw the video and heard the song, I was so pumped for this album. I haven’t felt that way for a Ratt album in almost 20 years.  This was the Ratt I knew and loved.  “Best of Me” is about Stephen’s wife.  He realized that she was the best part of him, but it took him to look elsewhere to realize what he had.

“A Little Too Much” comes crashing up next and Warren and Carlos bring the dual guitars front and center.  The song is catchy and infectious and delivers the goods.  The album has no signs of slowing down.  I also had a complaint about Stephen’s vocals on the last couple of albums and let me tell you he is in Top Form!!  The production cleaned up whatever problems there might be and it sounds like Stephen did 20-25 years ago.  It is amazing.

Next up is “Look Out Below” which is another gem.  It is a little grittier and dirtier and pure enjoyment.  The band has a little swagger and sounds tougher than they have in awhile.  It is solid blues rock.

When “Last Call” jumps in it has such a fast tempo and the groove and sonics will make you think it is a left over from ‘Out of the Cellar’.  And we are five songs in to the album and you can’t take a breath.  One rocker after another and no signs of slowing down.  Why should they.  This album has the songs and the songs is one thing that has been missing.

“Lost Weekend” is similar to “Look Out Below” without really repeating itself.   Stephen sounds like he is having a good time and the guitar work is again top notch with a great solo in the middle.  Think “Lack of Communication” when you hear this one.  Turn it up to 10.

They bring the blues vibe fully on with “As Good As It Gets” which is something they should do more of in my opinion.  And let’s not forget Warren as this is where he can shine and he does brightly.

“Garden of Eden” is one of my favorites on the album (which means I need to probably update my Top 20 Ratt songs list as this one didn’t make it for some reason).  The opening riff and bass line set the tone for another uptempo pounding. How is it we are this deep into the album and still have songs of this caliber.  I guess 10+ years of no albums had some great damn songs sitting around.

“Take a Big Bite” is another classic sounding song and and the guitars are the shining moment in the song.  It is a straight up guitar rocker and amazing that I still haven’t had a bad song on the album.

The first slow dow on the album is song 10, “Take Me Home”.  It is more of a ballad and really messes up the pace of the album at this point. Since we are close to then, there is no need for a ballad now.  This was the first misstep of the whole album.  It isn’t a bad song, but doesn’t fit the overall sonics or mood.  Delete for me.

The album ends with another fast tempo, blazing song.  “Don’t Let Go” is a great way to end the album.  It ends on a high note just like it began and that is what you will do, begin again.  Just keep it on repeat and let the fun begin. If you played this album during a workout, a workout is exactly what you would get.  The perfect album for the gym with it’s high energy and all it’s awesomeness.

What did this album get right?  Well, pretty much everything.  The songs were there, the production was amazing, Stephen’s vocals were great and the dual guitar work was back.  All things that make this album one of their best.  I did like 10 out of the 11 tracks which gives me a track score of 91% which after the last two albums is pretty great.  Now as far as an overall score.  Do I like it better than Detonator and Out of the Cellar?  Probably not, but it is right up there with them.  For that, I will it score it a 4.4 out of 5 Stars. This was the comeback album I always wanted and never thought I would ever get.  How many bands comeback after so long and can deliver the goods?  Not many.  This is one to remember.

After this album, the band fell apart again.  Rumor has it, that some version of Ratt will have a new album will be coming in 2019 and I will wait until that review to go into all the crap that has happened since this release.  Until then, let me know what you think of this album and where I got it right and where I got it wrong.  Always love to hear your opinion.  Thanks for hanging around.

Lastly, I would love for you to check out all the other Ratt albums I have reviewed.  The links are below.

Thanks and come back soon!!