For most of 2018, I have been reviewing all the Ratt albums from the Ratt E.P. in 1983 all the way to 2010’s Infestation. It has been an enjoyable ride walking through the history of the band, all the ups and the downs, the good and the bad and loving every minute of it (wait that is Loverboy)…and loving watching the wax or cd spinning round and round (much better).

Ratt has been a love/hate relationship.  While I love most of what they do, they don’t always deliver the goods and I tried to be as honest as I could be throughout the review processes.  I believe I was brutal where I needed to be and kissed their ass when it deserved it as well.  I hear they band is planning a new album in 2019 and when it comes I will review it in detail like the others and I will update this list and put it where it belongs among the classics or the crap.

You can go back and read each review in detail by just clicking on the album title.  This ranking will be just a summary of the good and bad of each album.  I hope you enjoy. 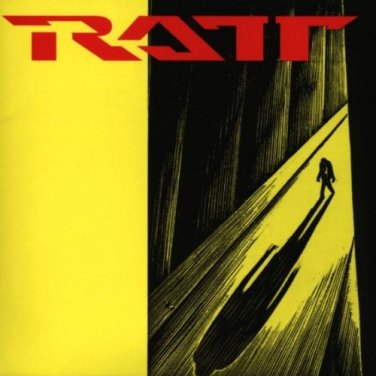 The hardest review of them all to write. I couldn’t connect to this album when it came out or even now.  The production quality was horrible; Stephen’s vocals needed some cleanup and weren’t always up to par; the double guitar of Ratt of old was gone and so the songs were missing that punch; and overall it was just bad.

Okay, it wasn’t all bad as there were a couple really great songs such as “Luv Sick” and “Over the Edge”.  There were 4 more songs that were okay to good, but, the rest was not worth keeping in the library and have been deleted.  This album is for the pure fan.  If you weren’t in to the band before this won’t be your gateway into the rest. 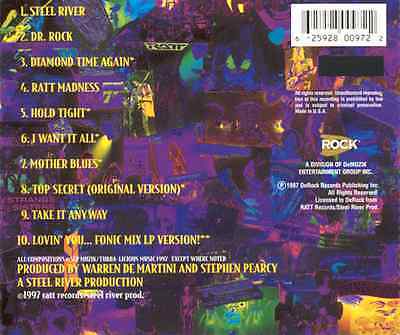 To be fair this isn’t a real studio album.  It is a collection of rare songs that have never appeared on a Ratt album so it isn’t a greatest hits collection.  I considered it fair game to review.  The bad – the band produced this one on their own and what a mistake that was.  The production quality was really bad and again, Stephen’s vocals were subpar and needed work.  And the same complaint about the previous album, the double guitar work was missing.

The Good – “Mother Blues” is awesome.  This song was from Stephen’s days with his side project Arcade he did in the early 90’s.  I also thought the opening track “Steel River”, “Dr, Rock” and “Ratt Madness” were great and all songs were from the Mickey Ratt era (pre-Ratt days).  There were a couple more decent songs, but this was the bunch that really stayed with me.  Again, this is another album for the pure Ratt fan as it is in rough shape. 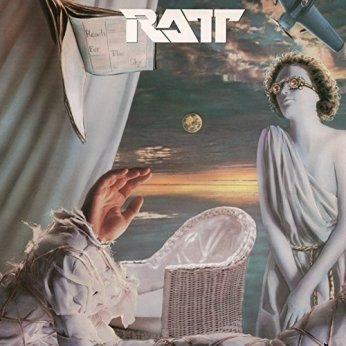 Now we are to a point where you can’t go wrong with any of the albums.  From this point forward you get classic, quality Ratt!!  And what more could you want.  I can see some of what the critics were saying with this album as it was a bit uneven at times and some songs were formulaic; however, overall it is still an enjoyable album.  The songs that were good then are still good now and hold up well.

What was good?  Well, you have “I Want a Woman” and “Way Cool Jr.” immediately come to mind and don’t forget to throw in “Chain Reaction”, “City to City” and the ballad “I Want to Love You Tonight”.  The rest is pure personal preference on whether you like or not.  It was the most even of the albums, but still had a lot of shining moments and worth to have in the collection.  It was almost as good as the next one, but just fell short. 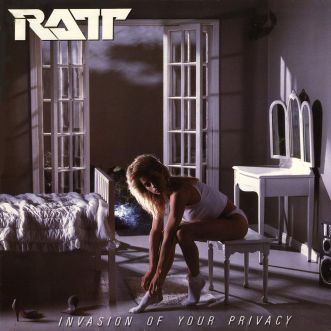 The follow-up to “Out of the Cellar” is a hard act to follow.  I think this is one I might catch the most slack on because this album did really well, but I didn’t think it was even close to being as good as the previous album.  In fact, I only liked 50% of the songs on the album, but those were great songs.  However, I felt the effort was weak overall and not their best work.  They stuck too much to a formula and didn’t take any chances with this album.  A little risk taking might have been the boost this album needed.

What were the songs that I liked?  Easy enough, they were “You’re In Love”, “Never Use Love”, “Lay It Down”, “Closer to My Heart” and “What You Give Is What You Get”.  Outside of that it was too formulaic and repetitive.  Nothing exciting for me.

The debut E.P. was sensational and is everything I love about Ratt.  The rawness of the songs and no-overproducing make this an amazingly enjoyable album for any Ratt fan and must have for the collection.  Their songwriting wan’t fully developed yet, but it definitely showed promise.

A couple songs were redone down the road including “Tell the World” and “Back For More”.  Another great song is “You Think You’re Tough” which ended up on their first greatest hits compilation “Ratt & Rol 81-91”.  This is a great introduction to the band and will easily become a favorite.

I am not sure why the critics didn’t like it or what they were expecting, but it sounds like Ratt to me and in 1986, that is what I wanted.  Today, the album holds up even better.   I felt this was a much better effort than ‘Invasion of Your Privacy” and it just had so much more meat to it.  The sound was a little different, but it was Ratt through and through.

The first half of the album is unbelievable and might the most solid of all the albums (except maybe #1).  The album opens with “Dance” and from their you get “One Good Lover”, “Drive Me Crazy”, “Slip of the Lip” and then end of “Body Talk”.  Man, that is one helluva ride.  The second half only has one hiccup, but the rest is top notch with “7th Avenue” and “Looking For Love” leading the way.  This is a no brainer. 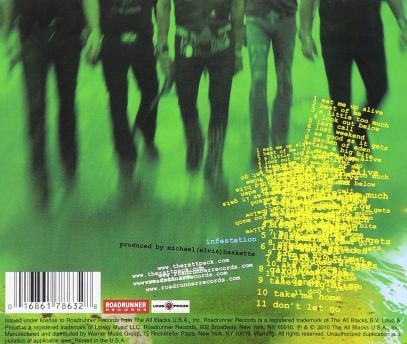 What did this album get right?  Well, pretty much everything.  The songs were there, the production was amazing, Stephen’s vocals were great and the dual guitar work was back.  All things that make this album one of their best.  This was the comeback album I always wanted and never thought I would ever get.  How many bands comeback after so long and can deliver the goods?  Not many.  This is one to remember.

‘Infestation’ opens with classic Ratt in all it’s glory with “Eat Me Up Alive” and the first single “Best of Me” feels like it came from 1984, but fresh and fits in with the music of the 2000’s.  The whole album was this way.  Throwback sound without really feeling dated.  Like I said…it was fresh and new.  Other standouts were “Garden of Eden”, “Look Out Below” and “Lost Weekend”, in fact there was only one bad song out of the bunch. If this one slipped you by, go grab it and add it to the collection. 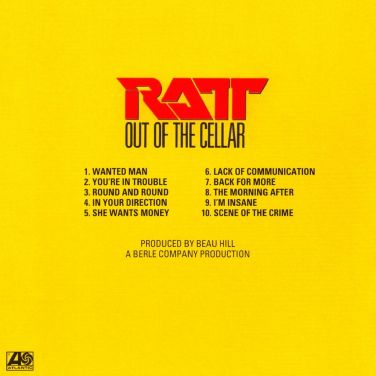 It is a strong debut album and might be one of their best except I do have one I like a little better.  The songs are powerful and it is a really fun, rock & roll album.  I love that gritty, raspy, bluesy voice of Stephen and the dual guitar work or Robin and Warren are mind blowing.  If there is any album to start with if you are wanting to get in to the band, this would be the one as it really started it all. I am sure I will catch some for not making this #1, but I can’t.

Every one knows “Round and Round”, but you can’t forget “Wanted Man”, “You’re In Trouble”, “Lack of Communication”, “I’m Insane” and “Back For More”.  Only two hiccups on the whole album for me, but the rest is solid gold and this is was my gateway into the band…probably most people’s gateway.  An absolute beast of an album.  And if Uncle Milton Berle approved, you should as well.

The fifth Ratt album and in my opinion, the best Ratt album.  I know, that is a strong statement.  However, that is what I feel and have thought that since the first time I heard it.  Yes, ‘Out of the Cellar’ is great, but ‘Detonator’ is solid from top to bottom.  Desmond Child brought a much needed spark to the songs.  There is not one song I would delete.  The sonics of the album were consistent and the album felt like one cohesive package.  Each song was meant to be exactly where it was in the order.

From the opening guitar riffs in the “Intro to Shame” all the way to the end with “Top Secret”, I was mesmerized.  Desmond’s production was spot on although some could say over-produced, I am not one of those people.  From the guitar work of Warren & Robbin to Stephen’s vocals, all was right with the world.  In fact, more songs from this album were on their greatest hits than any other. I loved “Shame, Shame, Shame”, “Lovin’ You’s A Dirty Job”, “One Step Away”, “Givin’ Yourself Away” and “Can’t Wait On Love” and the rest was right up there.  There is not much more I can say except you have to have this one for your collection.

And there you have it, the Ratt albums in order of how I rank them from the worst to the first.  Let me know what you think.  Where did we differ and where did we agree.  What is fun about these list is how differently each album impacts people. What I like, you might not, but we like the same band and that is all that matters really.

Thanks for spending all this time with my Ratt Reviews and I hope you enjoyed them as much as I did writing them.

22 thoughts on “Ratt – The Albums Ranked Worst to First”