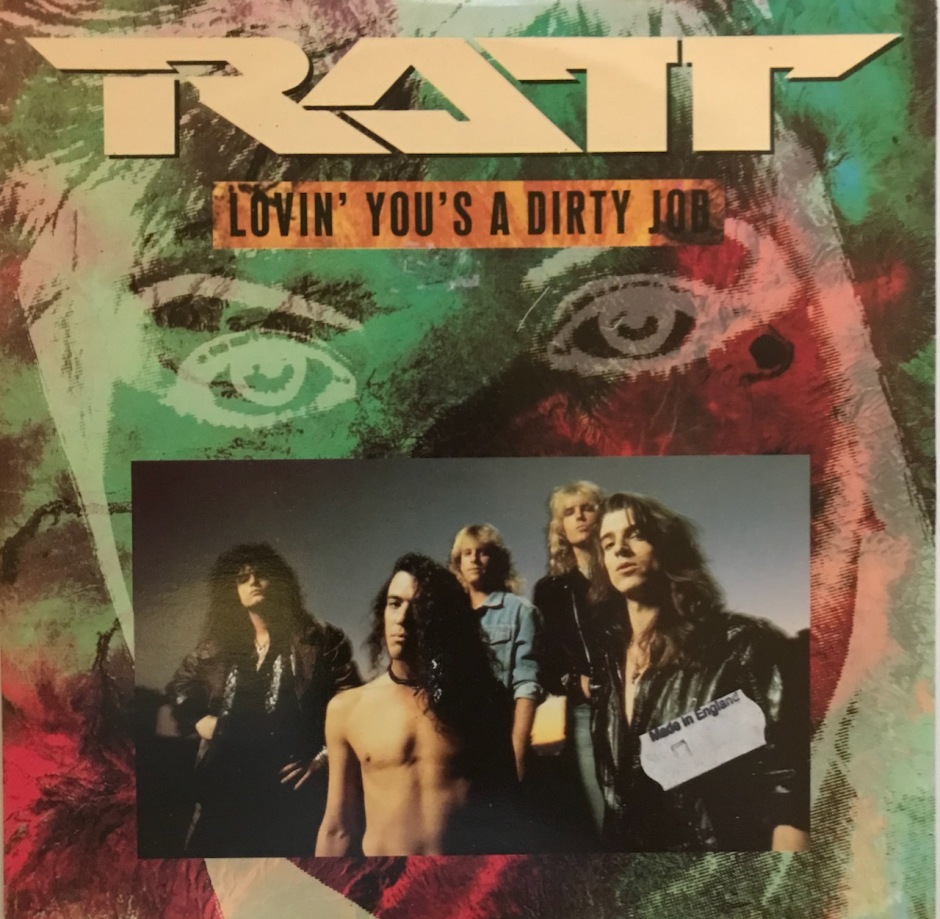 While at a Record Show here in Charlotte, I came across some really great singles and here is the first of 3 I found at the show that were in phenomenal shape. The first is from the band Ratt and it is the first single off their 1990 album ‘Detonator’ called “Lovin’ You’s A Dirty Job”. The song never made the Top 40 but did go to #18 on the U.S. Mainstream Rock chart. The song was written by Stephen Pearcy, Juan Croucier, Warren DeMartini and Desmond Child who also produced the song and the album.

My version of the single is actually the UK version with “What’s It Gonna Be” as the B-Side. It was also the B-Side of the US version as well. Both songs appear to be the album version and not the Radio edits, but honestly, “Lovin’ You’s A Dirty Job” is such a short song already at 3:14 that no edit is really needed.

“Lovin’ You’s A Dirty Job”, the first single from the album.  I really feel Desmond’s influence on this one.  The song keeps Ratt’s signature sound with Stephen’s raspy vocals and opens with another great guitar riff that is instantly recognizable.  I like the way Stephen handles the phrasing of the lyrics and just the overall style of the song. It is catchy and anthemic in delivery and an overall great song. It is a return to form with pure sleaze and the video is so full of cliches with the hot chicks you instantly remember why the genre died off. But it is still awesome!!

“What’s It Gonna Be” is the B-Side off their 1988 album ‘Reach for the Sky’. Strange they are highlighting a song from the prior album and not another album cut from the new album. Maybe they want to remind the people of their earlier albums. The song is a ballad (well almost).  It is a little upbeat in tone and an all around fun song.  It has a softer edge than some of their songs which is why I say it is more on the ballad side.  And who is this sweet Elana?  Anyone know?  I couldn’t find the answer on that whole interweb thingy.

Lastly, I would love for you to check out all the other Ratt albums I have reviewed.  The links are below.

Thanks and come back soon!!