The album was also the last album to feature Robbin Crosby.  Robbin had been the prominent songwriter for the band and if you look at the previous albums he always had a majority of the songwriting credits.  Not on this one.  He only had two credits on this album.  His departure from the band was a devastating loss in my opinion and then his untimely death in 2002 just confirmed that the magic of Ratt would never truly return.

Not only was it the last album for Robbin Crosby, but it was also the last for bassist Juan Croucier until he did return to the fold in 2012 and is still with Stephen today.  His story thankfully is not as tragic and I am glad he is back with the band.

I guess it is time to get into the actual music. Here is the track listing and back album cover and then into the music… 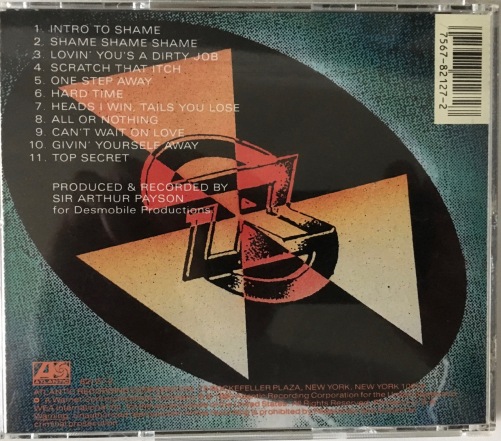 The album opens with a little Warren DeMartini penned instrumental piece called “Intro to Shame” which then slams into the blistering opening track “Shame Shame Shame”.  The song comes at you full force and the guitar work is A.M.A.Z.I.N.G.  There is even a guest appearance by the super talented Michael Schenker.  What more could you want in an opening track.  It is hard, heavy, catchy and starts off the album better than probably any of their other albums.  The song itself is about catching your significant other cheating and telling them they should have known better as now it is over.

The album doesn’t slow down and goes directly in to “Lovin’ You’s A Dirty Job”, the first single from the album.  I really feel Desmond’s influence on this one.  The song keeps Ratt’s signature sound with Stephen’s raspy vocals and opens with another great guitar riff.  I like the phrasing of the lyrics and just the overall style of the song.

The next song up is a hard drum heavy song called “Scratch That Itch”.  Again, it is classic Ratt and I think Stephen hasn’t sounded better as that raspiness is just perfect for this sleazy sound.  The song is just plain fun and all ratt & roll.

The first power ballad is “One Step Away” and as far as Ratt power ballads go this is one of the better ones.  It is very polished like only Desmond Child can do and not sure Ratt could have done it without him. It is the one time on the album you have a chance to catch your breath before the Ratt train runs you over again. 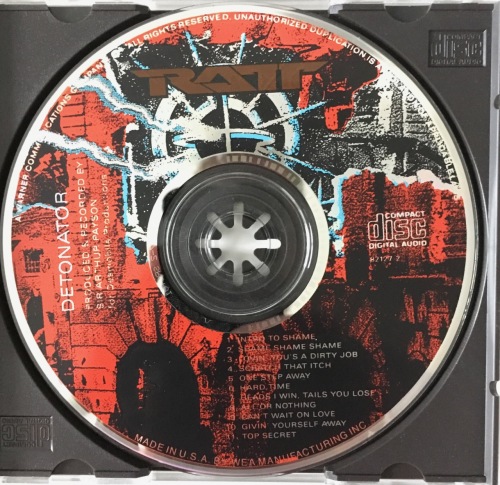 Side Two kicks off with “Heads I Win, Tails You Lose”.  It doesn’t have the punch as the opening track of the album, but it is still a great rocker.  The song is typical Ratt, but the lyrics are even cheesier than normal.  Come on, they are bad…just look…

I still like it despite the bad lyrics.  And if you listen closely, you can hear Jon Bon Jovi on backing vocals.  Why was Jon Bon on a Ratt album?  Well, Robbin was working with Jon on his solo album ‘Blaze of Glory’ at the time.

Next up is “All or Nothing” (Robbin’s first writing credit).  This one is a great little blues track and I like this one more now than I did back in the day.  I think Ratt really slays when they blues it up.  It just sounds dirty, gritty and bad ass.

Now, we are 8 songs in before we get the best damn song on the album.  “Can’t Wait On Love” (Robbin’s other credit), just shouts in your face from the get go. A full on anthem that is pure power that is bombastic and a pure adrenaline rush.  Blazing guitars, Screaming vocals and catchy as hell. This song will get you on your feet and moving.  For me, the most surprising and best song on the album.

The final single on the album and next to the last track is “Givin’ Yourself Away”.  It never charted and it isn’t their best power ballad, but it is still pretty good.  It isn’t your typical Ratt song and it actually sounds like someone else wrote it (even though Pearcy has a credit on it).  It does have a very surprising songwriting credit by one of the most prolific songwriters of all time, Diane Warren (she even wrote Aerosmith’s “I Don’t Want To Miss A Thing”).  That might be why it sounds so different than a typical Ratt song.

And the album ends with another Ratt classic song for me, “Top Secret”.  I think the song oozes cool with it’s funky little groove to it’s chorus.  It is another song that has a slightly different style and sound and I like it when they try new things.  There are the typical Ratt elements (like the guitar sound and Stephen’s vocals); however, there is just a little something extra that I can’t describe that I like.  Give me more of this!!

Since that is all the songs, do you want the lyrics to all the songs?  They are below and are from the CD booklet in case you were interested. 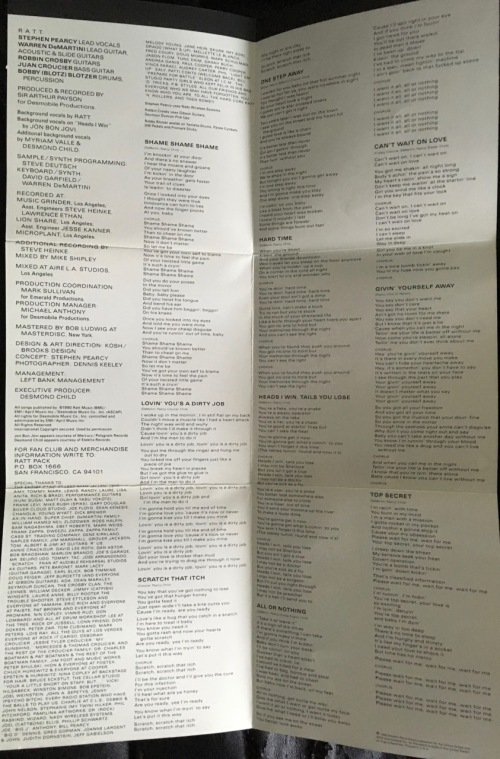 And there you have it.  The fifth Ratt album and in my opinion, probably the best Ratt album.  I know, that is a strong statement.  However, that is what I feel and have thought that since the first time I heard it.  Yes, ‘Out of the Cellar’ is great, but ‘Detonator’ is solid from top to bottom.  Desmond brought a much needed spark to the songs.  There is not one song I would delete so it gets a perfect 100% on the Track Score (11 keepers out of 11 tracks).  And the overall score for the quality of the songs and the overall album is a 4.75 out 5 stars.  All the songs aren’t perfect, but I wouldn’t remove a one.

Let the argument begin and tell me how I wrong I am, but I feel you are wrong if you disagree, so there!!!  Leave a comment and give me your thoughts on the album.  I love to hear everyone’s different viewpoints.

If you want to check out the review on the all the albums reviewed, just click on the album name below…