The band was still plugging along with the same line-up…

They were probably as popular as they were ever going to be and instead of exploring the heavier sounds from ‘Dancing Undercover’, they retreated back to the more glam-rock style with a bluesy edge of their earlier releases.  It wasn’t completely a bad thing, but it didn’t really show any new direction when the bands coming out at the time were way more polished and started taking away their spotlight.

When the album was completed, the album cover was created.  It is a beautiful, yet odd album cover with a Salvador Dali feel to it.  So many images and no way of knowing what the whole thing meant.  The band has never said or at least not that I can find.  It is a strange set of a floating book, the vintage WWII plane, a greek goddess wearing some strange glassed, a wicker chair and someone lying down, reaching for the sky while all tied up in some rope or twine.  The original cover had the lady showing her boob, but that was considered too controversial with most of the band and it was changed to what you see today.

The band’s tour for this album didn’t do well.  Several shows were cancelled for poor ticket sales and the overall tour didn’t last nearly as long as past tours.  Trouble was starting to brew and tensions were becoming frayed, but that is for another time as it happened after this album.

Well, I guess it is time to get to the songs, so why don’t we do that now… 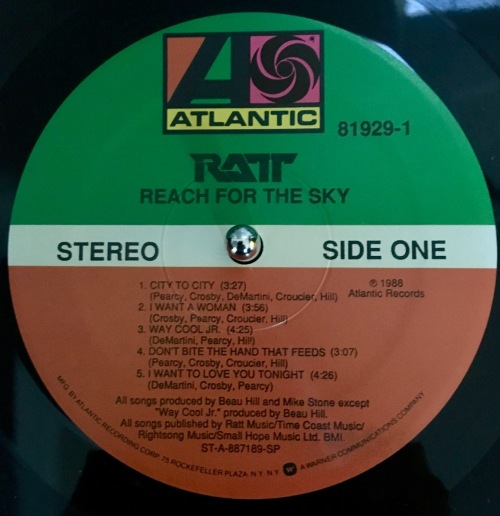 The album kicks off with “City to City”. When you hear this one, you feel like Ratt is trying something new.  It has a different vibe from what they had done in the past and it was very bluesy. It was a promising start to the album.  The song opened with sounds from a city including street noise, construction and then tires squealing before kicking in to that Ratt sound.  There was a new vibe to the song and maybe that meant the album.

Well, it didn’t.  The next track, “I Want a Woman”, is what you would expect from Ratt.  Strong guitar, juvenile lyrics and pure rock & roll.  And I mean this all in a good way.  The song was the band’s second single off the album and is all about Ratt wanting real women now and not these Daddy’s girls that were hanging around.  Not much else to it.  Sex, Sex, Sex is what you get and a lot of guitar!!  So Come On Baby!!!

The first single from the album was a real bluesy rocker.  It was “Way Cool Jr.”.  I really liked the vibes off this one.  It was dirty, gritty and just cool man!  The song seems to be about Elvis Presley with mentions of so many Elvis things like Memphis, good looking, stealing blues sound and things like that.  Pretty good argument.  The song only reached #75 on the charts, but received enough MTV airplay and other avenues to help drive the album to sell over 1 million records.

“Don’t Bite the Hand That Feeds” is up next and the first misstep for me on the album.  Not overly memorable and lacking the punch of the first three songs.  I guess it had some punch as according to Wikipedia, pro-wrestler Brian Pillman used it as his theme music.  Not an overly scary song choice, but whatever.  It isn’t bad, but just missing something. They all can’t be great.

For the end of the first side, Ratt give us the first ballad on the album with “I Want to Love You Tonight”.  It isn’t bad for a ballad, but not good enough for the radio (obviously since it wasn’t released as a single).  It has the power with the boys guitar playing and Stephen’s vocals, but it isn’t emotional enough for the full impact a power ballad needs.  I still like it and wouldn’t delete it from my library.

The second half starts off with a kick to the face with the heavy, fast-paced rocker “Chain Reaction”.  Ratt picks up the energy and gives us a pure classic Ratt song.  One of my favorites on the album.  The song is non-stop action, no one misses a beat and Stephen doesn’t even get a chance to take a breath.  It is exhausting and everything you want from Ratt.

“No Surprise” is up next and is one of those songs that is okay, but missing something.  Whether it is better structure, better lyrics or better musically there is no magic on this one.  Yes, it has a guitar solo, but still seems to be lacking in some way.  It is to similar to “Don’t Bite the Hand That Feeds”.  Since Ratt’s album usually have a second half that doesn’t hold up to the first, I am a little worried the rest will be subpar as well.

Thankfully that is not the case.  “Bottom Line” is your standard Ratt track, however, I like it more than “No Surprise”.  I could say all the same things, but I think the chorus is a little better and I like the punchiness of the way Stephen delivers the song.

“What’s It Gonna Be” is another ballad (well almost).  It is a little upbeat in tone and an all around fun song.  It has a softer edge than some of their songs which is why I say it is more on the ballad side.  And who is Elana?  Anyone know?  I couldn’t find the answer on that whole interweb thing.

The album ends with “What I’m After” which is another blasé song and keeps the streak alive where the second half of the album is weaker than the first half.  The song is too formulaic and not much exciting about it.  It doesn’t make me want to flip the vinyl over and start again which a good final song should do.  Now, of course I will flip it over and play it again as I do still like the album.

I can see some of what the critics were saying with this album as it was a bit uneven at times and some songs were formulaic; however, overall it is still an enjoyable album.  The songs that were good then are still good now and hold up well.  I liked 7 out of the 10 tracks which gives me a track score of 70% which is still pretty good.  Overall content, it is right up there with Invasion of Your Privacy for me so it will also score a 3.0 out of 5 Stars as that one did.  Which one of those two will come out higher in the end we will have to wait and see.

If you want to check out the review on the all the albums reviewed, just click on the album name below…