For My Sunday Song #137, we are going to ‘Creatures of the Night’ album and the song “Danger” from 1982.  This album didn’t do that well for the band and the tour did even worse.  Kiss was in turmoil at the time and the band seemed doomed to be at their end.  The album eventually did go Gold, but at the time was a failure.  Now, it is actually regarded to some as one of their best albums…and I would be in that group.

“Danger” was written by Paul Stanley and Adam Mitchell as the band had been using outsider writers for some time now.  Paul had lead vocal duties and Eric Carr was on drums.  But those were the only 2 official Kiss members on the song.  It was thought for a long time that Bob Kulick played lead guitar, but it was actually Vinnie Vincent who was not yet a full-fledge member of Kiss.  Ace, technically, still had that role although he didn’t play on the album.  He did get credited with playing and his picture is on the cover. 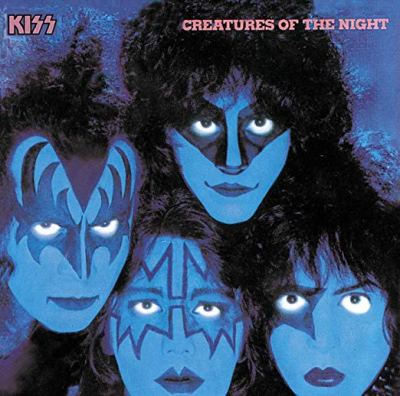 And if that wasn’t enough, Gene doesn’t play bass on this one either.  The bass player was Jimmy Haslip from the jazz fusion group The Yellowjackets.  Gene apparently was too distraught over his break-up with Diana Ross to play.

The Creatures album saw the band get back to their true hard rock roots.  Paul was singing at his best and this song really showcased what he could do.  The song was melodic and had power and attitude. Vinnie’s guitar work and solo were amazing and it was easy to see why he ended up in the band (although for a short time).  But like all songs on this album, there was one ingredient that was solid and the reason this album was so good.  It was Eric Carr’s drumming.  What a drum sound this album and song had.  If anyone saved Kiss, it was Eric!!!

Give the song a listen and let me know what you think.  Thanks for stopping by and I hope you have a Happy Sunday!

In the night I will be waitin’
Ready to go, soon as the daylight is fadin’
In the night my heart is beating
Out of control, can’t stop the way that I’m feeling
I wanna know how far to go, takin’ my life in my hands
Out on my own, fighting alone, call me the desperate man

In the night, oh, I can feel it
Time slips away, if I can’t pay I will steal it
In the night I will be screamin’
Hour by hour livin’ the life that I’m dreamin’

Under the gun, I’ll be the one,
walking the edge of the knife
Taking the best, leaving the rest,
I’m gonna run for my life