Kiss were plugging along and everything is still right in the world. In 1988, as they were preparing for their Tour of Japan, the label and the band decided to release a greatest hits compilation. The CD was issued on May 25, 1988 and was limited to only 100,000 copies and only released in Japan. The was the 2nd greatest hits package to not be issued in the U.S., the first being 1982’s ‘Killers’. For that fact, this is a hot collector’s item for Kiss collectors and I didn’t even know about it until years after its release and I still don’t have a physical copy of this release (but I will get one someday).

The Japanese character on the back of the case and on the CD might look familiar. It is the same symbol that was on the bottom of the cover art for the band’s 1974 album, ‘Hotter Than Hell’. Eric Carr also used that symbol on his drum kits for quite some time. Chikara is the Japanese word for Power if you are interested in knowing that fact. And when you are looking to buy this CD on ebay or somewhere, the prize to get is the OBI strip with all the Japanese writing. A lot of the ones I’ve seen out there don’t have that strip anymore.

END_OF_DOCUMENT_TOKEN_TO_BE_REPLACED 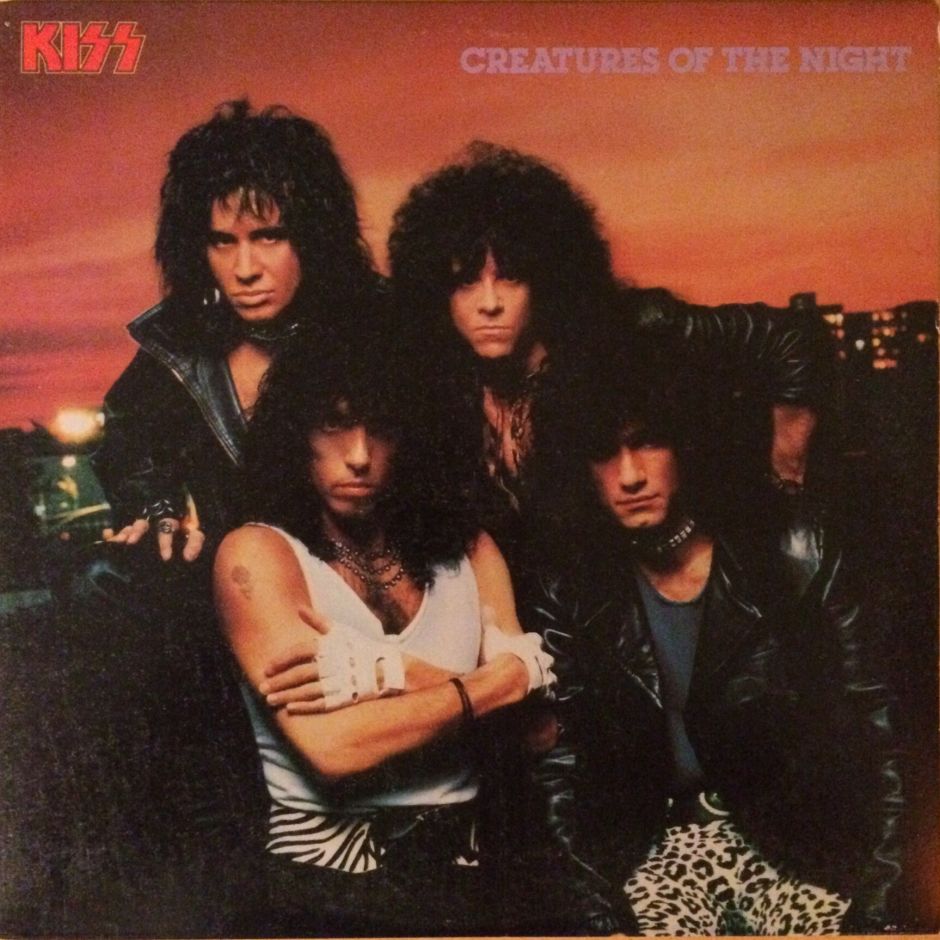 You saw the title to this and you are probably saying to yourself, “John, you’ve already reviewed ‘Creatures of the Night’. Have you lost your rocker?” And the answer to that question is YES! I have reviewed ‘Creatures’ and I am off my rocker. The thing is, the band re-released the album in 1985 for some strange reason. The new line-up of Kiss with Paul Stanley, Gene Simmons, Eric Carr and Bruce Kulick was riding high. The fans loved the line-up, the last album was successful, the tour went off well, so all was good in the Kiss world. Someone, somewhere in the Kiss camp thought, “Hey, we should re-release the album ‘Creatures of the Night’ because why not.” I have no idea the rational or reasoning behind this at all as it makes no sense.

If you are going to re-release it, why not put a brand new cover on the album with the band without make-up. Check! Why not stick a picture of Gene’s Ass on it in tight-fitting leather pants. Check! Here’s the thing. The picture of the band without make-up has Bruce Kulick on it and if you aren’t aware, he didn’t play on the album. I guess that isn’t a problem because the original picture on the album had Ace Frehley, and if you read my review earlier, you know he didn’t play a note on the album either. So in the end, I guess it doesn’t matter whose picture is on the cover. And here’s the other thing, it was never fun looking at the back cover because there was a giant ass staring you in the face. You felt a little grossed out looking at that….thing!!

END_OF_DOCUMENT_TOKEN_TO_BE_REPLACED

Kiss had to get back to their hard rock roots after the disaster of their last studio album ‘Music from the Elder’. The band had been on a downward spiral since ‘Dynasty’ with their sound going softer, Peter Criss leaving the band and now Ace was pretty much done. Due to his disillusionment the last few years with the band, the fact he had no say in anything, his alcohol problem and his prescription drug problem related to a car crash, Ace was done. He was so done in fact, he does not show up anywhere on this album. Well, that isn’t entirely true. Kiss still credited him as a member of the band, his picture is on the cover and he made some public appearances in support of the band including appearing in the music video for ‘I Love it Loud” which he didn’t even play on. After that video shoot though, Ace was no longer in the band.

Kiss was basically a trio for this whole album. Additional musicians and songwriters were brought in to help them write and record this album. Michael James Jackson was brought in as the producer and Michael had worked on the four new songs used on the ‘Killers’ album early in the year. They went in to the studio with the sole purpose of bringing back the heavy rock. Paul’s writing friend, Adam Mitchell, was back to help as well as Jim Vallance, Bryan Adams and Mikel Japp. All these guys co-wrote on the ‘Killers’ album, so it stands to reason that all these songs for both ‘Killers’ and ‘Creatures’ were part of the same writing sessions.

END_OF_DOCUMENT_TOKEN_TO_BE_REPLACED 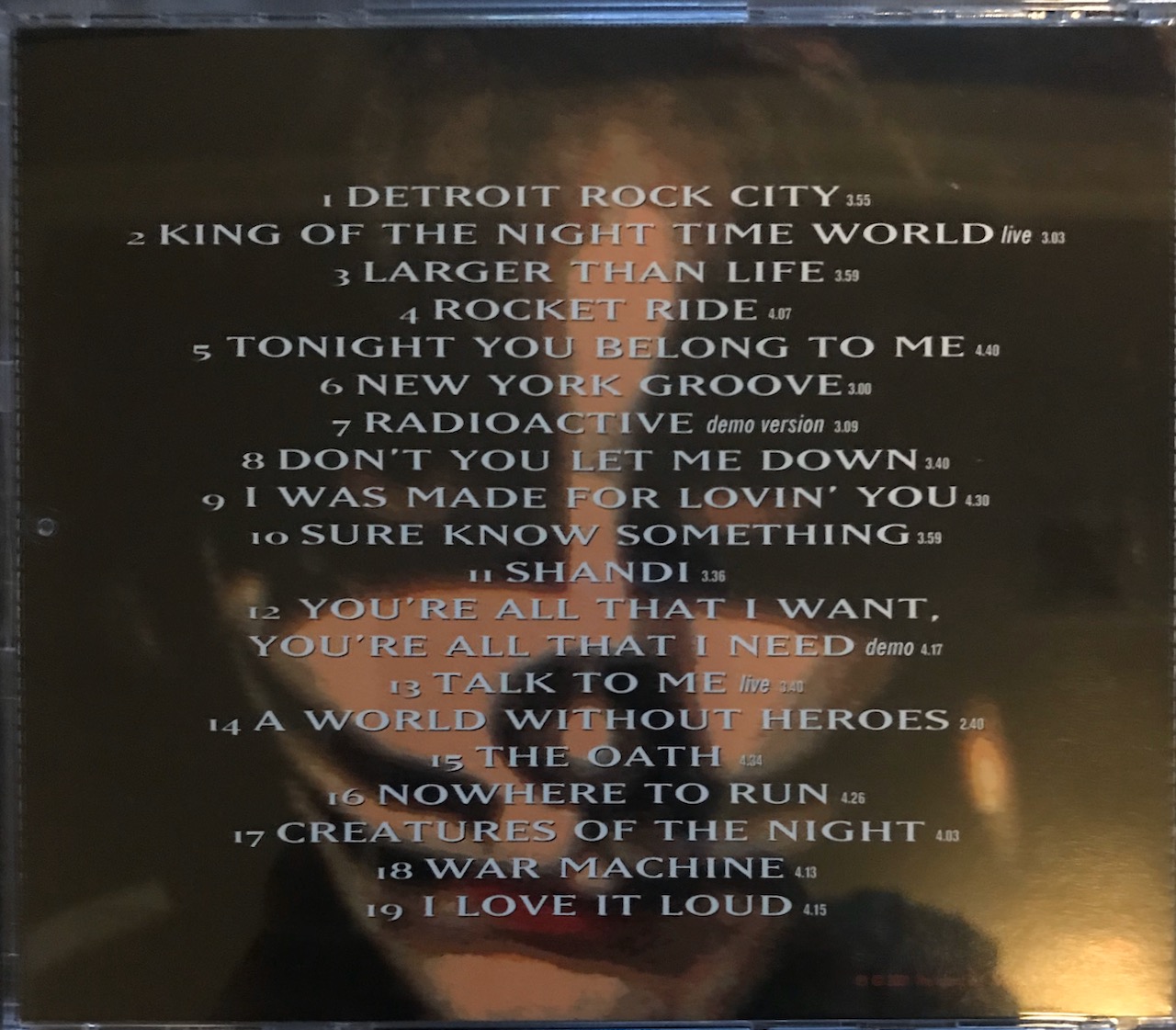 END_OF_DOCUMENT_TOKEN_TO_BE_REPLACED

For My Sunday Song #137, we are going to ‘Creatures of the Night’ album and the song “Danger” from 1982.  This album didn’t do that well for the band and the tour did even worse.  Kiss was in turmoil at the time and the band seemed doomed to be at their end.  The album eventually did go Gold, but at the time was a failure.  Now, it is actually regarded to some as one of their best albums…and I would be in that group.

“Danger” was written by Paul Stanley and Adam Mitchell as the band had been using outsider writers for some time now.  Paul had lead vocal duties and Eric Carr was on drums.  But those were the only 2 official Kiss members on the song.  It was thought for a long time that Bob Kulick played lead guitar, but it was actually Vinnie Vincent who was not yet a full-fledge member of Kiss.  Ace, technically, still had that role although he didn’t play on the album.  He did get credited with playing and his picture is on the cover.

And if that wasn’t enough, Gene doesn’t play bass on this one either.  The bass player was Jimmy Haslip from the jazz fusion group The Yellowjackets.  Gene apparently was too distraught over his break-up with Diana Ross to play.