Let’s go back to the year 1972.  I was just shy of 4 years old and didn’t know anything about music at this point.  Obviously, I don’t remember this release.  I do know that 46 years later, I would discover this album in a collection I picked up.  And I also know this was one of the coolest albums in that entire collection.  I thought it would be fun to go deep in my collection and talk about one of my favorites and this is definitely out of the ordinary from my usual reviews.

Babe Ruth is a blues rock band that leans very progressive and they hail from England.  Formed in 1970 with Alan Shacklock, Janita “Jennie” Haan and Dave Hewitt.  The band would later add Dick Powell and Dave Punshon and we would then have the band we hear on this album simply titled ‘First Base’.  Lots of baseball theme with the band name, album title and even the weird cover of spacemen playing baseball.

The album kicks off with the most rocking song of the bunch called “Wells Fargo”.  It is the story of the old western stagecoach and has a whole cowboy theme to it.  Jennie Haan’s vocals are totally brilliant with a hard rocking edge with the hints of Janis Joplin.  Alan’s guitar riff was fuzzy and cool and when you bump that up against Brent Carter’s saxophone you are in for a treat.  The whole blues rock feel is what I’ve been digging a lot of lately and this helps satisfy that thirst and then thrown in a damn fine guitar solo and life is good.  There is also a cool groove throughout the song by the fantastic rhythm section of Dave on bass and Dick on drums.  This is how you kick off your debut album folks.

Not complacent to repeat themselves they throw you a massive curve ball (in keeping the many baseball analogies) with “The Runaways”.  A much slower, toned down song with piano and orchestration using an oboe and lots of cellos.  Jennie’s vocals turn soft, subtle and filled with a little sadness.  The oboe adds an extra layer of sadness to the song as well.  The song towards the end is mostly instrumental and with the piano the main focus with some drums added in as the tempo starts to pick up a little more at the end with the intensity building a little every few bars. The drums were played by Jeff Allen and not Dick.  They aren’t planning on letting you get bored.

The final track on Side One is a cover of Frank Zappa’s “King Kong”.  The really cool part of this song is that is capture in one take with absolutely no overdubs.  Pretty freaking incredible.  You’ve got a nice back and forth with the guitar and the keyboards to open the song as Dick drives home the drums beats.  At 6:40, you get an instrumental party that is mesmerizing and almost life changing.  I just leaned back in my chair with my headphones on and absorbed every note.  What a beast is this old “King Kong”!! 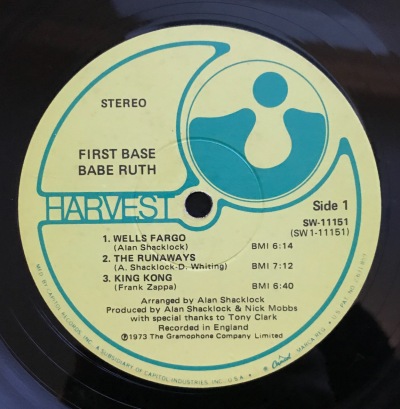 First up is another cover called “Black Dog” written by Jesse Winchester.  Jennie’s edgy vocals come back, softly at first but you hear the grit.  The blues are back with some great little guitar fills.  The song picks up the beat and races through at over 8 minutes as they bring their progressive side into full force.  What I love about their music is I get lost in it.  I find myself just enjoying every note played and every note sung as I really dig Jennie’s voice.  And Alan seems to always hit a home run with every guitar solo and this one is great.

Then we get the totally awesome “The Mexican” which has pieces from Ennio Morricone’s “Per Qualche Dollaro in Piu” from the movie ‘A Fistful of Dollars’ laced in to the song.  With a song like “The Mexican” you would expect a little hispanic vibe to it and you would not be wrong.  They add all sorts of elements incorporating that sound including congas and even a little cabasa.  But don’t think they forgot the rock because as usual, Alan throws in some wicked guitar.

And lastly, we get the song “Joker”.  This one comes at you with a little bongo playing before Alan lays down a riff.  Alan sings the opening verse and does a little back and forth with Jennie.  They play nicely off each other. One thing is for sure is that Alan is the driving force behind this band especially in the songwriting department and the playing as each song is practically a showcase for his talent. There are no swings and misses with him. This is another one over 7 minutes and yet the time flies by so fast as the enjoyment is so high as it is mixed with blues and the rock perfectly with everybody playing at their very best. 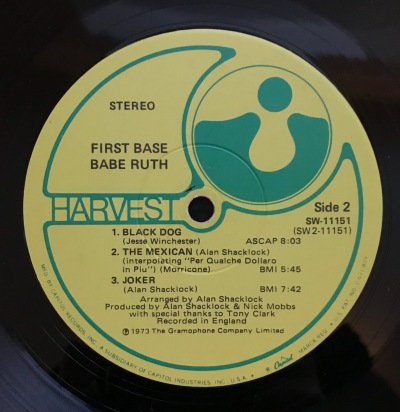 I have to say this is one I have enjoyed for the last year more than I ever thought I would. That album cover and band name had me gravitating toward it when I saw it the first time.  I had to drop a needle on it and man, I am so glad I did.  I had never heard of them so I had no idea what to expect and with that first note and Jennie Haan’s vocals and Alan Shacklock’s playing, I was hooked.  It is blues rock with a progressive edge and the two work so well together, who knew!!  For me, this is a 5.0 out 5.0 Stars.  Some great stuff.