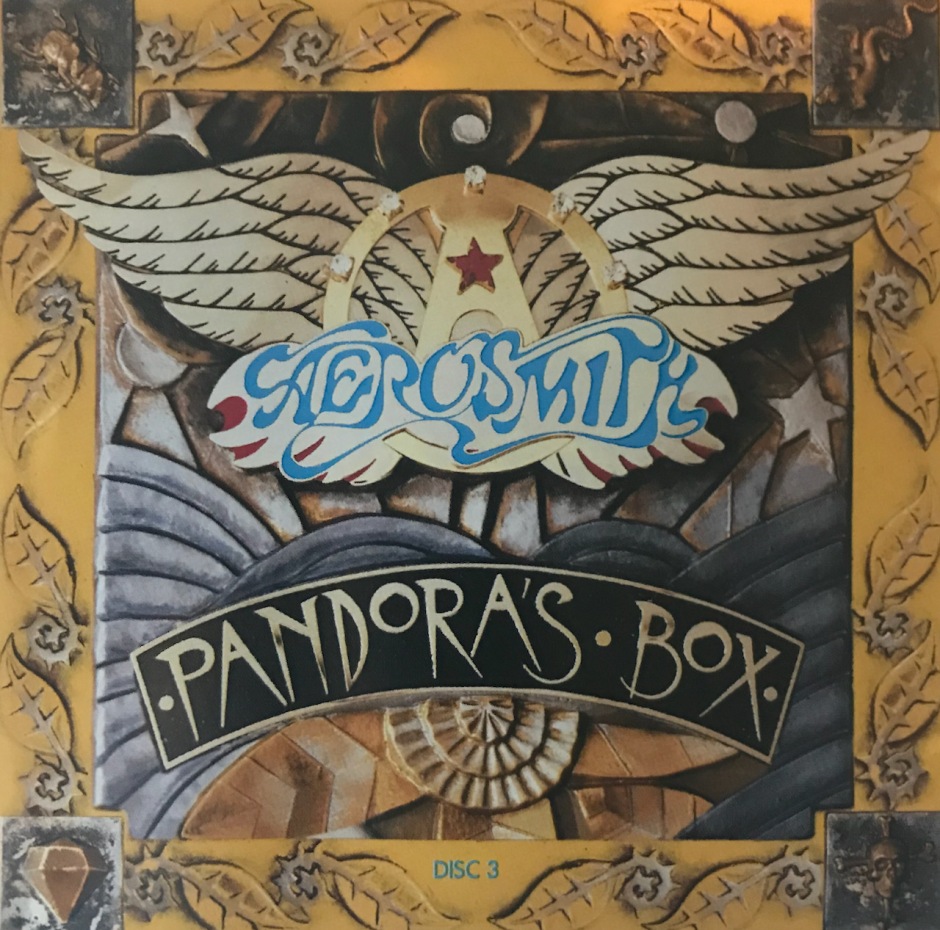 Columbia Records was taking full advantage of the band’s new found popularity on Geffen Records. Even though they lost the band to another label, they still could release Aerosmith material for everything they had rights to and that was quite a bit. They kicked off with two live releases ‘Classics Live!’ and ‘Classics Live! II’ as well as compilation called ‘Gems’. The cool things about those releases is there were no repeats from old live albums or greatest hits collection. It made it enticing for collectors. And this was no different. Released on November 19, 1991, this was a 3 CD compilation full of the bands greatest hits (while under Columbia) with a ton of previously unreleased material. That alone makes this worth getting. There are 31 previously released cuts and 21 unreleased consisting of live, alternative mixes and pure rarities.

I am lucky enough to have the long box version and it really is a box. It contains a book plus 3 CDs all in jewel cases with artwork. If you picked up a later version, the long box was replaced with a cardboard sleeve and the book was shrunk down to CD case size. The set I have is the one you want…in my opinion at least. The box set did real well going to #45 on the Billboard Charts and it was eventually certified Platinum on August 16, 1996. If I’m not mistaken, since the set includes 3 CDs, they only had to sell 333,334 copies to reach the 1 million sold platinum status. Someday, I might go song by song, but for now I am sticking to an overview of each disc and what I like about it each one. So let us get to it.

The book is long but it ain’t lean. The book is full of band pictures but most importantly it has a long essay on the History of Aerosmith. To make it even better you had all the song information you could possibly want on each and every song. You get who wrote the song, who played on the song and a comment from a band member on each and every song. You even get lyrics, but strangely only on about 6-7 songs and not sure how those were decided on to have lyrics.

The set kicks off with what I think is one of the coolest songs on here. It is “When I Needed You” which is a Steven Tyler song that pre-dates Aerosmith. It is from his bands the Strangeurs & Chain Reaction. That is a cool treat. Queen did something similar when they released the soundtrack to the biopic Bohemian Rhapsody. For those of us collectors, that is the gold at the end of the rainbow. Some other cool gems on this disc are an alternate version of the song “Movin’ Out and an unreleased song from the Aerosmith sessions called “On the Road Again” and not the Willie version. You also get some sweet unreleased live versions on here with a live version of “Write Me a Letter” and 2 songs from a live radio broadcast on WKRQ in Cincinnati (too bad it wasn’t WKRP!!), “Rattlesnake Shake” (which is a 10 minute jam session) and “Walkin’ the Dog”. If that wasn’t enough they throw in a live version from the Texxas Jam from 1979 with the song “Lord of the Thighs”.

Disc 2 doesn’t hold back either. You get a couple remixes with “Last Child” from the ‘Rocks’ album and “Draw the Line” from well…’Draw the Line’. You also get the instrumental “Krawhitham” which is pretty cool, but I think that had been released prior. And strangely, they throw in 2 more live songs from the same Texxas Jam as on Disc 1. You get live cuts of “I Wanna Know Why” and “Big Ten-Inch Record”. There are three other tracks that were unreleased. First is the song “All Your Love” which was recorded at the Cenacle in Armonk, New York back in May 1977. The second is rehearsal song called “Soul Saver” from the ‘Toys in the Attic’ sessions. It is less than a minute so it isn’t much, but still cool. Lastly, you get a live version of the great song “Adam’s Apple” from a stop in Indianapolis, Indiana on July 4, 1977.

And the third disc won’t disappoint either. I like the fact they included a song from the Classics Live! album with “Kings & Queens” that is unexpected. The first unreleased track you get is a a snippet called “I Live in Connecticut” which is an early rehearsal of the song “Three Mile Smile” and then they give you “Three Mile Smile”. They repeat that process with a rehearsal of “Cheese Cake” when it was called “Let It Slide” and then the give you “Cheese Cake”. “Downtown Charlie” is another unreleased song (the band is really drunk on it) along with “Shit House Shuffle” which is a cool, very short instrumental. There is still more, you get “Riff & Roll” which is unreleased track from the ‘Rock & Hard Place’ sessions as well as a couple alternate versions of “Major Barbara” and “Chip Away the Stone”. The final two unreleased are the third Beatles cover they’ve ever released with “Helter Skelter” and then a track that is a hidden track and not listed which is the instrumental “Circle Jerk”. On this disc they also included a solo track from Joe Perry called “South Station Blues” and one from Brad Whitford called “Sharpshooter from the Whitford/St. Holmes album. I guess if they had a Tyler song prior to Aerosmith, Joe and Brad had to have one too!

You get a ton of music so for the value, it is worth a grab. The first two discs are the classic years of the band and the ones I spend most of my time. The last disc is from the band when they were really struggling to find their way. The songs aren’t as good, but still some treasures mixed in there. Overall, I would say it is a great box set and Columbia has done a great job giving you material that is worth having. They couldn’t help that some of it isn’t the greatest material to showcase. My Score is a 4.0 out of 5.0 Stars as I still feel this is worth having even if at times it is disjointed and not consistent on the quality. It is 230 minutes of Aerosmith and that isn’t necessarily a bad thing!