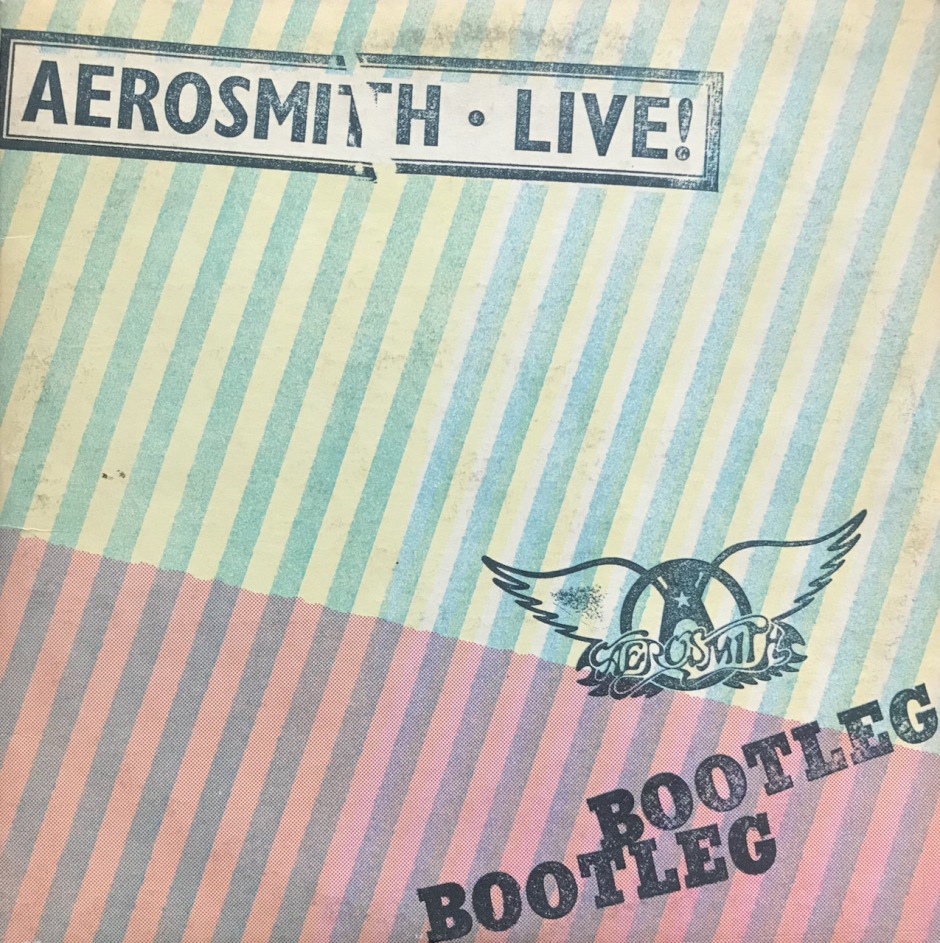 The band had been recording / touring and recording / touring non-stop for years now and it was taking its toll. The drug use was rampant as Tyler and Perry became known as the “Toxic Twins” if that gives you any indication of the toxicity of their drug use and relationship. The record company and management felt the band needed a break so they decided to put out a live album. I believe the record company wanted a clean, studio overdubbed album like every other band was doing at the time, but the band wanted it to sound real and raw.

Luckily for us, the band won out and we got a rough and raw record that was more representative of how the band really sounds live. They even took it a step further and made the album cover look cheap and dirty like a real bootleg album would look. You have coffee rings on the back cover and everything looks stamped and very unprofessional. One great thing about bootlegs are they are usually riddle with mistakes so the band purposely left the song “Draw the Line” off the setlist although it is really after the song “Mother Popcorn”. They were meticulous to make it look like a real bootleg. And to go even further with the bootleg theme, they recorded a couple songs on to a cassette and used that version so you get a slight hiss like a cassette usually has. I love the authenticity they were shooting for on this record.

The band pieced together songs from numerous shows over 1977 and 1978. They also threw in 2 songs from a radio broadcast from 1973 and those songs are obvious as they don’t sound anything like the other tracks and it does disrupt the live feel they established over the rest of the album, but we will get to that later. The album includes the same ol’ crew of Steven Tyler, Joe Perry, Brad Whitford, Tom Hamilton and Joey Kramer but that would soon come to an end…more on that with the next review.

And what does the album sound like? Well, let’s walk through it and find out.

The album kicks off with “Back in the Saddle” from the Indianapolis, IN show on July 4th, 1977. The song is left untouched and you hear all the little mistakes and the roughness in Tyler’s vocals. Tom Hamilton’s bass is pretty high in the mix and stands out. The guitar work is great and Joey’s drums pound away and keep the boys on time which is probably a hard thing to do. The rawness is evident and you start to feel like you are the show. The next two tracks, “Sweet Emotion” and “Lord of the Thighs” are both from Chicago, IL show on March 23, 1978. They bleed the crowd sound straight in to the next track and you don’t realize it is from two different shows. The talk box noises come first with the bass thumping away. The band comes in singing “Sweet Emotion” and then we are off to the races. What is great is how the guitars sound as they are rough around the edges with even a little feedback and the solo is killer as they end it go right into “Lord of the Thighs” with a Whitford intro and then his turn to shine on the guitar. It is a great transition and always a fun song as it gets low down & dirty. Then with a few firework type explosions they go in to “Toys in the Attic” which is from a show in Boston, MA on March 28, 1979. Again smooth transition and you’d never know itwas the same show. The song is a high energy barnstormer of a track. The vocals aren’t always crisp and clear as I am sure Tyler is running around and the mic isn’t always right in front of him especially during the chorus. The guys jammed a lot on this one and at a frantic pace as the song is sped up considerably.

Side 2 kicks off with “Last Child” which is from another Boston, MA song on August 9, 1978. You get a couple little quick notes like tuning up and then Tyler comes in on the vocals and the song kicks in to gear. It has a great slow groove that is bluesy and funky as well. Then we get “Come Together”, a Beatles cover from the show in Waltham, MA from August 21, 1978. The band covered this song for the movie Sgt. Pepper’s Lonely Hearts Club Band” movie and it appeared on the soundtrack, but this is the first time it has been released on an Aerosmith release. Aerosmith’s version is stellar. It is hard, heavy and Tyler delivers the lyrics in serious, deliberate fashion that gave the song a powerful, strong voice and sounded so cool. “Walk This Way” is up next and the song is from Detroit, MI on April 2nd, 1978. With a drum barrage and soom damn fine talk-box, the song kicks in and goes 100 mph. It has power and the band sounds tight and they are strutting their stuff with this one. Another killer performance. The final track on the first LP is “Sick as a Dog” from Indianapolis, IN on July 4th, 1977 the same show as the opening track. Not a favorite track of mine, but a still a fine performance it is just after “Walk This Way” it is sort of a let down as that performance was one of the best on the album.

The second LP kicks off with the classic song “Dream On” from Louisville, KY on July 3, 1977. The song has a few mistakes musically and they are all here front and center. I can imagine it is a tough song to sing live and Tyler handles himself well enough. He gives it his all and you can tell no clean up is made on this which is part of its charm. Hell, the song is so good it doesn’t matter how it sounds. The guitar work is so loud in the mix it really adds to the punch this song gives. And then the scream towards the end comes from a guy who has been singing all night and gives every little bit he has left in him. Exactly what you want in a live show. Next up is “Chip Away the Stone” from Santa Monica, CA on April 8th, 1978. “Chip” is not a favorite of mine, but still a fine track. Nothing special added here but still solid. Then a song I thought was filler on ‘Draw the Line’, “Sight For Sore Eyes” is actually a little better here than the album version. It has a little more heart and soul. The song is from Columbus, OH show on March 24th, 1978. Then we get to another Aero classic with “Mama Kin” recorded from the same Indianapolis show as a couple other songs on the album. The song starts off with a bang with some fine guitar work and Tyler’s raspy vocals that give it the depth it needs. It is another fast-paced rocker that sucks you and gets you moving like a good live song should. The final track on Side 3 is “SOS (Too Bad)” from that same Indianapolis show and almost imperceptible transition between the songs you almost didn’t know the song changed. It is just as raucous and rowdy as the previous track and you need to catch a breath by the end.

Side 4 kicks off with the two songs from the Paul’s Mall radio broadcast from Boston, MA on April 23, 1973 and you can tell this doesn’t not come from any of the live shows as the prior songs. There is definite difference in sound. First up is “I Ain’t Got You” which is a blues track from Calvin Carter. It sounds like a little club and I love the blues style that comes with Tyler on harmonica which I always love and Whitford lays down a sweet solo. Then they bring David Woodford up on stage and he blows some serious sax on the song “Mother Popcorn” which is a James Brown & Pee Wee Ellis cover. The band goes all funkalicious with this one as Tyler does his best James Brown and you can almost seem slithering around stage. And those Tyler screams at the end are both awesome and terrible at the same time which is fantastic!! Then there is the uncredited track of “Draw the Line” from the Philadelphia, PA show on March 26th, 1978. The song now starts to sound like the rest of the album. The opening bass and guitars are sensational and this song is turned up to 10 and you are swept back up in to the thrill of the show. They sound fantastic here and you can almost feel the excitement the crowd is probably feeling. Finally we get to a classic Aero song even if it is a cover. “Train Kept A Rollin'” is from the Detroit, MI show which is the same show as “Walk This Way”. It comes roaring at you and is one of those covers that is so quintessentially Aerosmith you forget it is a cover. What is great with this one is they throw in an instrumental piece of the song “Strangers in the Night”, the old Sinatra song. It is also uncredited on the album…oops, another bootleg mistake (or is it). “Train” is such a great song to end the album as it just blows you away and leaves you wanting more. What a way to go out!!

Now this is how a live show should be. Rough and raw around the edges. It should sound live and have all the mistakes, warts and all. That is what you expect when you go to a live show. You don’t want perfection because if you want that, just listen to the studio album. Live the band can interpret a song anyway they like and I am okay with that. Aerosmith made the live LP sound like it was from one live show (with the exception of the two tracks from 1973) with great transitions and use of crowd noise. As long as it feels like a live show, that is all I care about. The 70’s had some great live albums and this is up there with the best of them and a personal favorite of mine even if a few songs were just so-so…they all can’t be amazing. Still, I will give this a 5.0 out of 5.0 Stars as it is a must have in any live collection. Give it a try if you haven’t before, you won’t be disappointed.