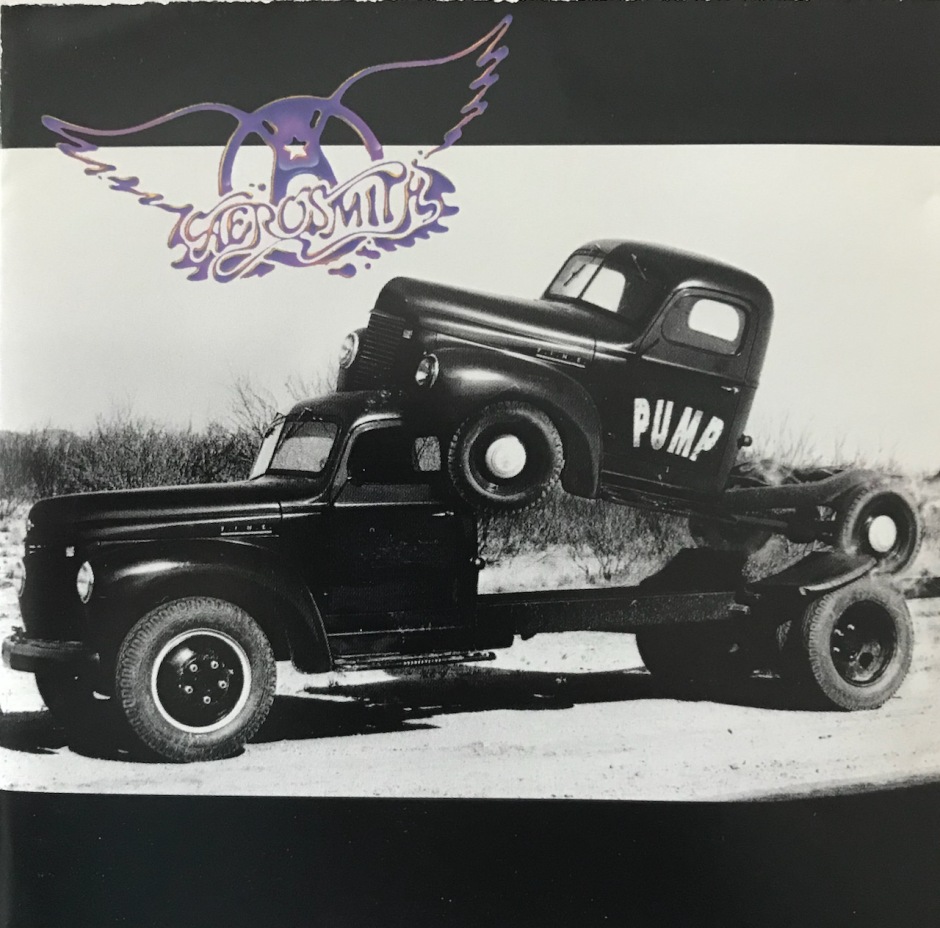 ‘Permanent Vacation’ was the band’s comeback album selling over 5 millions copies so the next album was critical…well critical in the fact that was the last album a real comeback or did the band get lucky. Bruce Fairbairn was back on the boys and they flew up to Vancouver, Canada to Bruce’s Little Mountain Sound Studio from January to June of 1988. The band had 19 songs written and whittled them down to 10 for the album. And was the album successful? Yes, you know it was. The album sold over 7 million copies, had 4 singles with a Grammy for their song, “Janie’s Got a Gun” and if that wasn’t enough, their song “Love in an Elevator” went to #1 on the Mainstream Rock Chart which was their first #1 ever.

When making the album, Bruce was focused on adding as many hooks as possible and they wanted to become more free with their sound. As a result, they ended up having numerous musical interludes between songs or should I say to start songs. It added a whole a new dimension to their sound and made things a little more interesting. One thing that didn’t change was their lyrics. The boys from Boston still rule the world with their double entendre lyrics and as a result, the lyrics were left out of the release as they were afraid what the PMRC (Parents Music Resource Center). It turns out this caused an issue with some people so to remedy that, the bands tour book included the lyrics.

The album finally came out on September 12, 1989 and went all the way to #5 on the charts. The comeback was real and Joe Perry, Steven Tyler, Brad Whitford, Tom Hamilton and Joey Kramer were back on top. Aerosmith had solidified their comeback and they had done something few bands get a second chance to do. They were now sober and they were bigger than ever…coincidence? I think not!!

The opening track is “Young Lust” written by Steven, Joe and Bryan Adam’s writing partner Jim Vallance. The sexually charged song comes roaring out of the gate and gives you and idea of what the rest of the album is probably like as it is going to be full of melodic, hook-laden songs about sex, sex and I think more sex. The song is so produced and commercialized as that was the goal for this album to make the band as commercial as possible and it worked. The song doesn’t set the world on fire with originality, but it is a ball-buster of an opening track that gets the juices flowing with Steven giving his all, Joey laying down the beat and Joe ripping through the guitar riffs. What more could you want.

Next up is “F.I.N.E.” or I like to say, “Fucked-Up, Insecure, Neurotic, Emotional”. Ok, I don’t really like to say that as F.I.N.E. is so much easier. This time around Tyler and Perry get help from the famous Desmond Child and as a result you get a more melodic song than the opener, a little more toned down and it sounds a little more like early era Aerosmith. The band sounds fresh, focused and so not-fucked up. Another song that reeks of sexual innuendos so much you might catch VD just listening to it.

“Going Down / Love in an Elevator” is up next and the little spoken word opener with the sexy elevator operator, Catherine Epp, oozing sexuality with her voice and her innuendos is enough to drive you crazy. The song kicks in with a blues-infused rocker that is catchy as hell with a Def Leppard style anthem that gets stuck in your head and that is what they were going for I suppose. Perry’sguitar work is sensational, Tyler’s vocal delivery is perfect and then the Bruce Fairbairn horns at the end give it that little extra flair and it all works so well. The song did really well as a single going to #5 on the Billboard Top 40.

Finally a song that isn’t about sex, sex and more sex. Nope, it is about drug use and the impact it can have on you. “Monkey On My Back” is another bluesy track and more Perry slide guitar. Kramer lays down an almost tribal drum beat before the song really kicks in and goes full throttle. Hamilton’s bass is thumping a nasty groove and overall musically it is a good song. Vocally and lyrically it was a little boring to me as the music was a little overpowering. Not to say it is a bad song, but compared the first three it isn’t up to snuff.

“Water Song / Janie’s Got a Gun” is another track with an opening little piece before you get to the song. “Water Song” has a glass harmonica played by Randy Raine-Reusch before the bass-riffs come in by Hamilton (who co-wrote the song with Tyler) and those percussive drum hits by Kramer the song lets lose and is an overly dramatic, masterpiece that takes you on what feels like an incredible journey and when it gets to that incredibly distorted guitar solo you are so engrossed in the song. The song is about child abuse and they tackled with such respect and crafted a song around it that is both beautiful and sad at the same time. The song went to #4 on the Top 40 Charts.

The second half of the album kicks off with “Dulcimer Stomp” which is a down home, swampy instrumental thanks to the Appalachian dulcimer played by Randy Raine-Resuch before kicking in to the main song “The Other Side” which was written by Tyler and Vallance before they had to add Holland-Dozier-Holland as song writers as they were sued for stealing the song from their hit “Standing in the Shadows of Love” and this was the settlement. The song is full of horns arranged perfectly, full of harmonies and full of hooks that will snag the biggest fish even if just swimming by with a quick listen. The song is a romping stomping good time track that rocks it out from beginning to end. A little over-produced and commercial, it still went to #22 on the Top 40 which was their goal to make any way.

“My Girl” is a very generic, old school good time rocker. It is a quick tempo-ed track and will get your foot stomping and head bobbing, but there is little heart behind it. It is a soulless song that is probably more filler than hit. It is catchy and you will get sucked it as that is its sole purpose.

Next up is “Don’t Get Mad, Get Even” which is another bluesy, swamp-filled song with an Australian flair thanks to the didgeridoo played by Randy Raine-Reusch. When the song kicks in it gets a little boring despite the cool opening. Tyler speaks more than sings and then screams and I do like the whole “Don’t Get Mad, Get Even” line, but the song falls flat and leaves me a little empty inside.

We do get saved with “Hoodoo / Voodoo Medicine Man” and this one is written by Tyler and Brad Whitford who doesn’t get many songwriting credits. “Hoodoo” opens with a khean performed by Randy Raine-Reusch who has handled all the weird instruments used on this album. After this little interlude, “Voodoo Medicine Man” kicks in and seems to be going for dramatic and epic like “Janie’s Got a Gun” and I think they succeed. Kramers drum barrage is awesome, Hamilton’s bass groove is killer and Tyler’s vocal deliver of the chorus all just gels and totally kicks some ass. After a couple duds, it is nice to the back half being saved by this one.

The final track is another single “What it Takes” and is the only ballad on the whole album. It is written by Tyler, Perry and of course, Desmond Child. The song is pure cheese with its emotionally filled lyrics sung perfectly by Tyler. The accordion gives it a little something different than most ballads. And ballads were so played out, but this one is too good not to love. It is easy to see why the song went all the way to #9 which helped propel this album to the 7 million sold figure.

Then there is a hidden track that is so completely unnecessary. It is an instrumental by Randy Raine-Reusch who plays the naw (gourd mouth organ of the Lahu people of Northern Thailand) starting at 5:19 in the hidden track contained in “What It Takes”. It sounds like a hillbilly stomp so doesn’t really fit with this song. It must’ve been something they were toying around with in the studio and decided to throw it on here at the last minute. Are we sure they were done with the drugs? Kidding.

The Track Score is 7.5 out of 10 Tracks or 75%.  It is another solid album by the band and that is two in row on the comeback trail.  With four singles, four Top 40 hits and 7 million sold, I think they found their way back to the top.  Yes, the album is over-produced, too commercialized and yet, it works on so many levels.  There is still some old Aerosmith in their, but this is the late 80’s and they have evolved with the times without completely losing their identity.  Do I like it as much as the 70’s stuff, no, but that doesn’t make it any less good.  My Overall Score is a 4.0 out of 5.0 Stars as they are killing it with this one, but still not my favorite work by the band.  However, I can’t deny the impact the had on the music scene and how excited everyone was that Aerosmith still had some life left in those old bones.