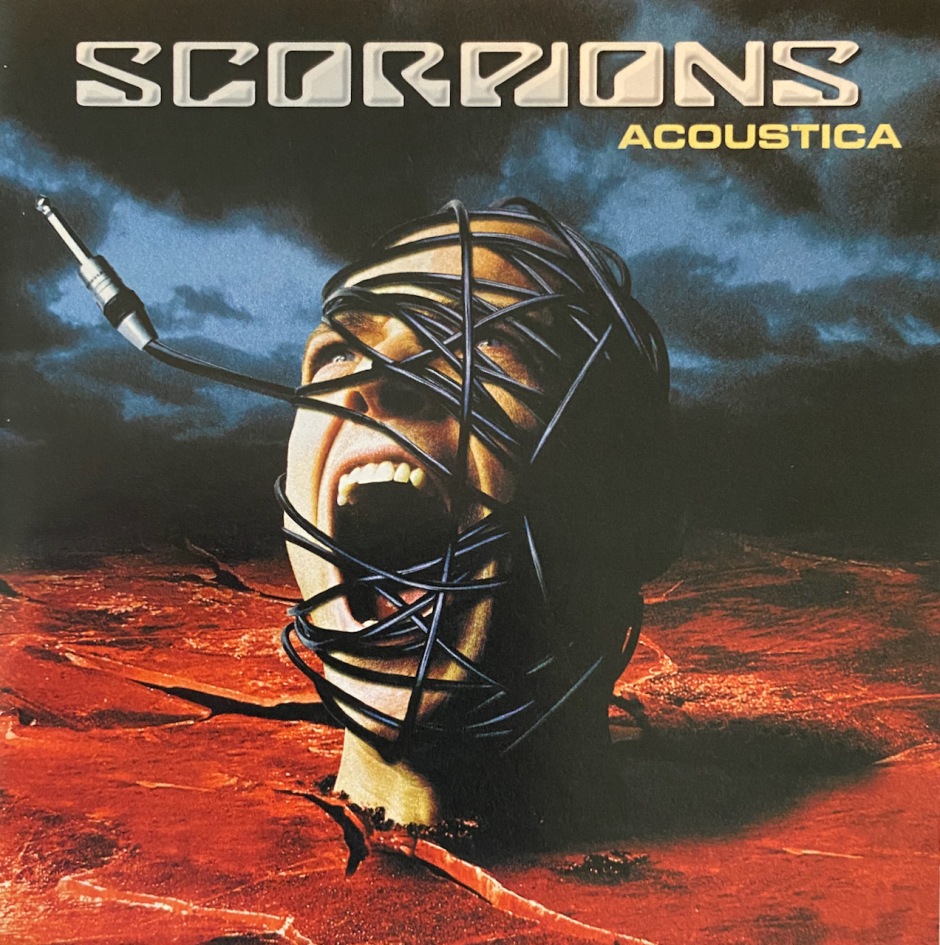 The Scorpions were in a mood to keep doing things their own way and after doing an album and touring the classically orchestrated Scorpions rock, they decided to strip it all back and do some shows acoustically. The band performed 3 shows at the Convento do Beato in Lisbon, Portugal in February 2001 and those shows were recorded. From those 3 shows, the album called “Acoustica” was made. The album was released a few months later on May 14, 2001.

The show was a little unusual for the band as it was just the normal guys. Yes, Klaus Meine, Rudolf Schenker, Mathias Jabs, Ralph Rieckermann and James Kottak performed, but they weren’t alone. The actually had three guitarists and the third was Johan Daansen which really fills the songs up with that acoustic guitar sound. On keyboards was Christian Kolonovitis who also helped the band arrange the songs for the acoustic set. Christian was also the one who was the conductor and arranged the Scorpions songs for the Moment of Glory Berlin Philharmonic Orchestra album the prior year. James might have been on drums, but they also had a percussionist by the name of Mario Argandona. And to fill up the stage even more, there was a cellist, Ariana Acu and a group of female vocalists to help with backing vocals. They were Hille Bemelmanns, Liv Van Aelst and Kristel Van Craen. They really went all out to bring a different experience and I would say it worked pretty well.

The band also were great in giving us a few things extra on this release. We got the biggest hits, no doubt, but that wasn’t all. We actually were treated to 3 brand new songs (four if you got the DVD). And on top of that, we got a handful of great covers from The Cars, Kansas and Queen. With all that, it made this a very worthwhile purchase to get all the songs we hadn’t heard before. But was it all worth it? Let’s see.

The set opens with “The Zoo” and it has this cool groove which is almost like ‘Black Velvet” by Alannah Myles. Then we get the ballad “Always Somewhere” and the crowd claps along and at times sings along, there are female backing vocals and Klaus sounds stellar. Ballads usually work well in the acoustic setting and this one is no different. After this one we get the first of three new songs. First one up is “Life is Too Short” and this one brings some string orchestration. It is another ballad but it really shows the maturity of the band. I would really love to hear a studio version as this is really a great song. The chorus is really catchy which helps draw you in and as the song builds it just keeps getting better.

END_OF_DOCUMENT_TOKEN_TO_BE_REPLACED 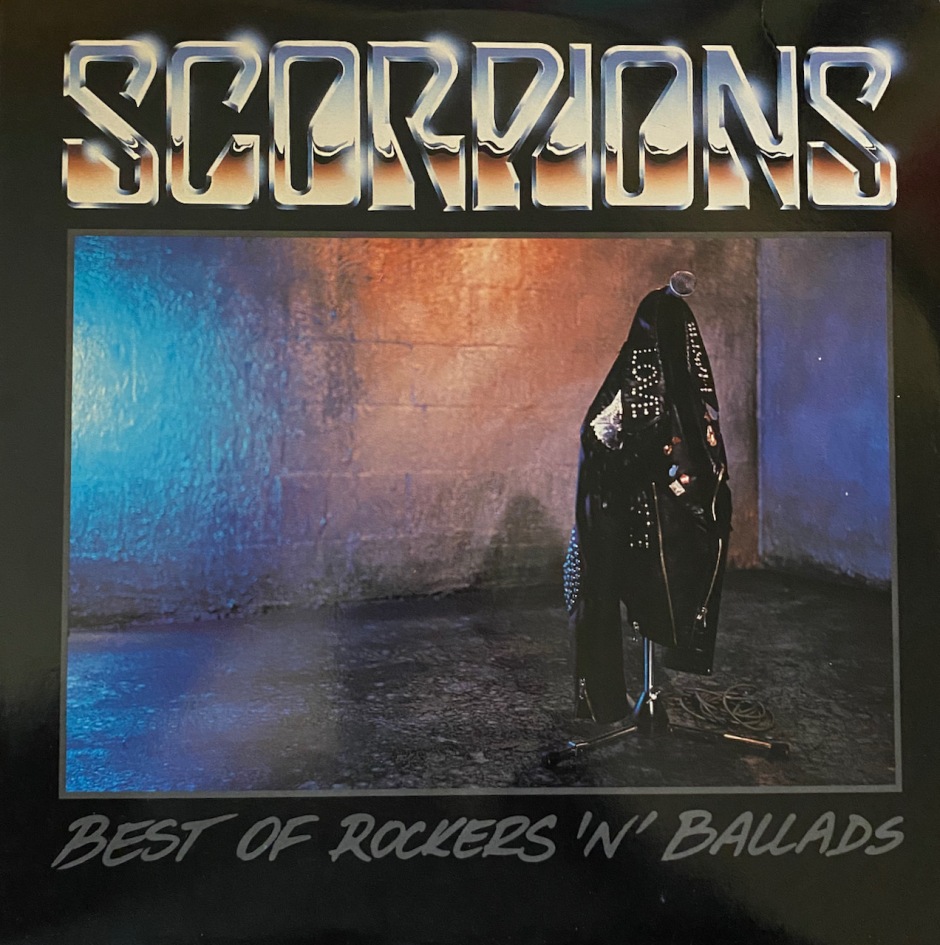 The Scorpions were flying high. From the release of ‘Lovedrive’ in 1979 all the way up to ‘Savage Amusement’ in 1988, they could do no wrong. Their label, Mercury Records, thought, “hey, good time for a greatest hits compilation”…and ‘Best of Rockers ‘N’ Ballads’ was born. Since they have had other compilations focusing on Pre-‘Lovedrive’, Mercury Records released a compilation of only songs that were during the bands tenure on Mercury from 1979-1988. To make it enticing to fans, they added a few new remixes and unreleased tracks and I am a fan of new mixes and unreleased tracks.

The album was released on November 29, 1989 just in time for Christmas. And what a present it was. The album sold over 1,000,000 copies and is the only Scorpions compilation to be certified Platinum. The album went to #43 on the U.S. charts and had one single that went to #5 on the Mainstream Rock Charts. Now, depending on where you were in the world, you got a different track list. The European version had an extra track, “Is There Anybody There” from ‘Lovedrive, but this was a remix and previously unreleased. They also got a remix of “Hey You” which is a Non-Album single from 1980 that hasn’t been released on any album up to this point. The US and Japanese releases did not have either of those tracks, but did have the original version of “Hey You”. The European CD release also included one more rare track. It was the version of “China White” which features the guitar solo that was only available on the US Blackout release. If you are a completist on the Scorpions, you have a lot to buy here.

END_OF_DOCUMENT_TOKEN_TO_BE_REPLACED 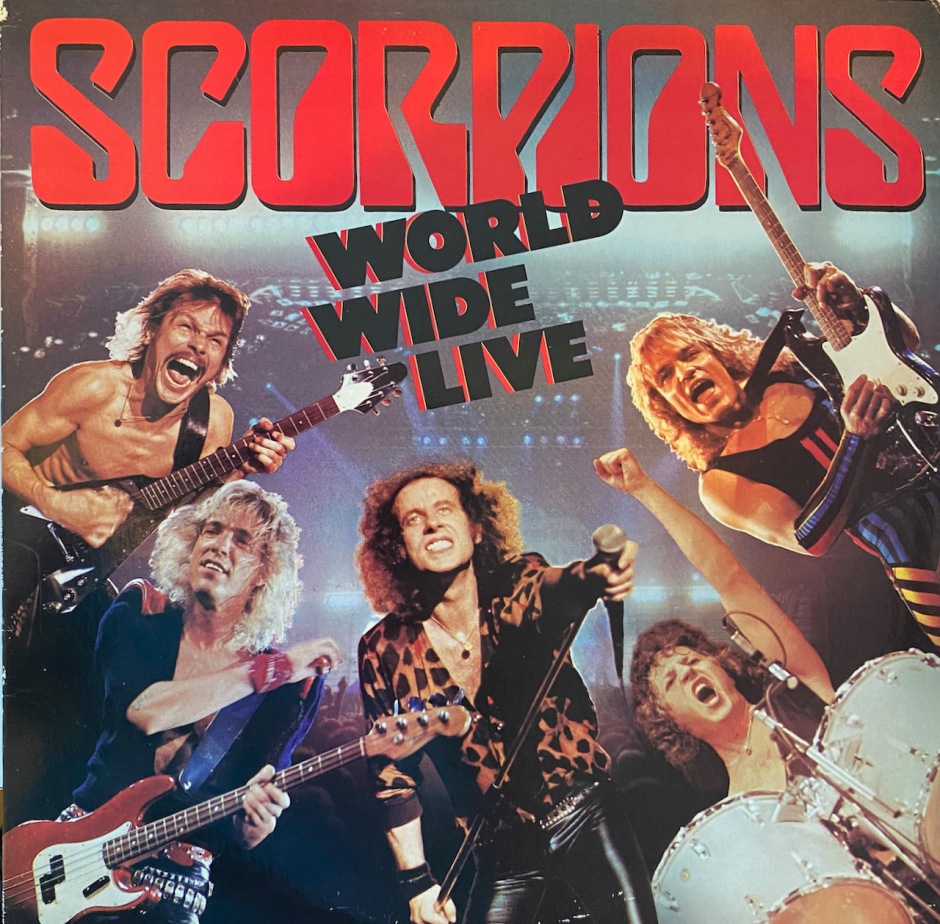 The album was released on June 20, 1985 and went all the way to #17 on the US Billboard 200 Chart and sold over 1,000,000 copies giving it platinum status. The band could do no wrong. The classic line-up was in place with Klaus Meine, Rudolf Schenker, Matthias Jabs, Francis Buchholz and Herman Rarebell. And of course, the album was produced by long time Scorps producer Dieter Dierks.

END_OF_DOCUMENT_TOKEN_TO_BE_REPLACED 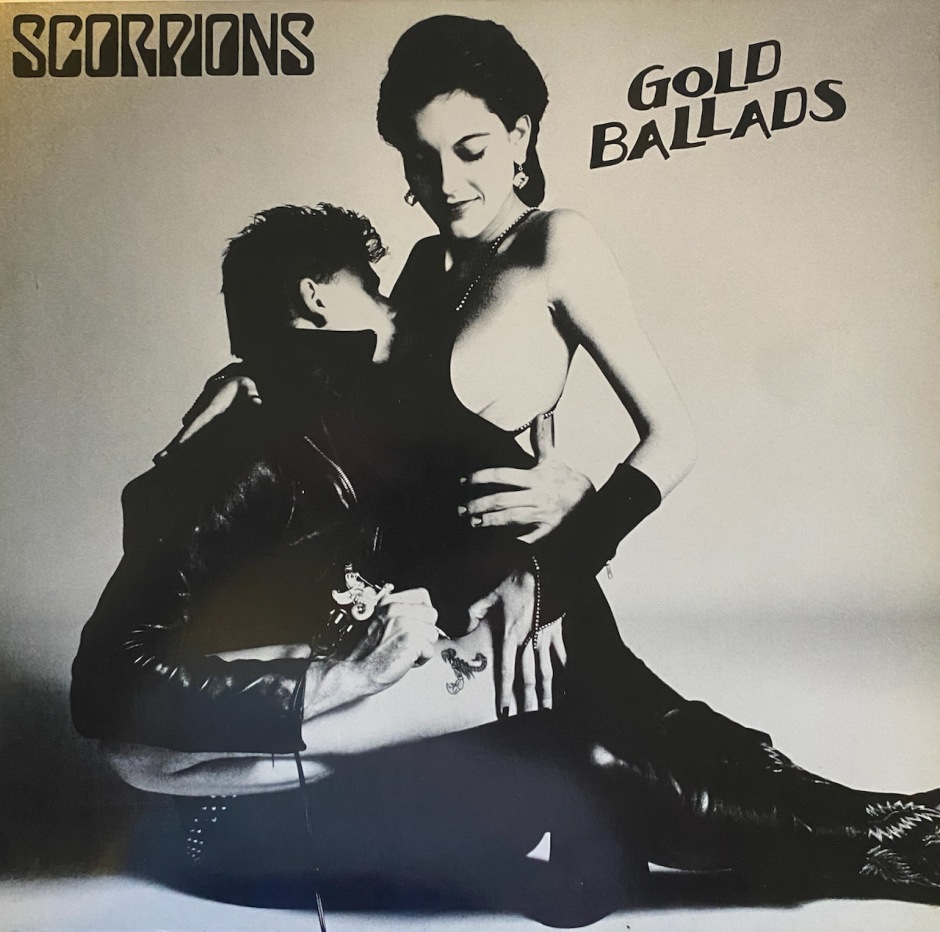 In the U.S., the label was capitalizing on the Scorpions success by releasing a compilation, so why not the European labels. 1984 was a big year for the Scorpions so lets milk it for what we can was the attitude of the day!. With the massive success of their ballad “Still Loving You”, why not release an E.P. of their best ballads and pick those from four of their best albums, ‘Lovedrive, ‘Animal Magnetism’, ‘Blackout’ and ‘Love at First Sting’. And ballads are big sellers, so it made perfect sense.

My copy is the German release…yes, I have a bunch of German releases as I found all of these at one of our local record shows (not stores, but the record shows where there are all the goodies). The album was released on October 13, 1984 with multiple reissues over the next couple years across Europe. This copy I have is from the original release in Germany. It is a 5 song E.P. and let me tell you, it is a great set of ballads. I also love that the cover is probably an outtake photo from the ‘Love at First Sting’ album cover shoot.

Sit back and let us go trough it for you.

“Still Loving You”, from ‘Love at First Sting’, is one of my favorite Scorpions ballads and one of my favorite all time as well. About a couple in love that knows it’s over, but try to make it work one more time. The song opens with some gentle, soft riffing and Klaus singing in almost a whisper. Then the power part of the ballad kicks in and the guitar licks are blissfully beautiful and the chorus is gut-wrenchingly heartbreaking and lovely at the same time. I think this might one of Klaus Meine’s best vocal performances on any album.

END_OF_DOCUMENT_TOKEN_TO_BE_REPLACED 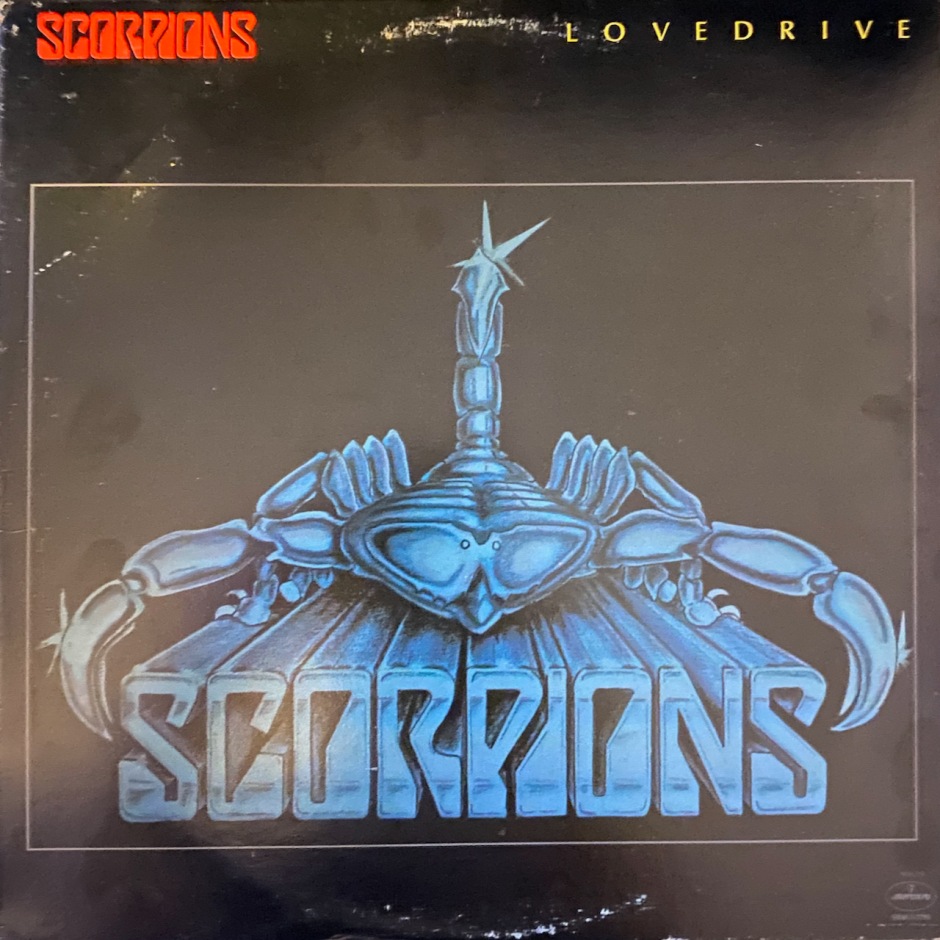 We are now on the band’s sixth studio album and the first one with new guitarist Mathias Jabs. Mathias replaced Uli Jon Roth who was unhappy with the direction of the band and left to form his own band called Electric Sun. With Mathias on board, we now have what is considered the “classic” line-up because it was the line-up that had the most success. That line-up was Klaus Meine, Rudolf Schenker, Francis Buchholz and Herman Rarebell. But Mathias wasn’t the only lead guitarist on this album.

After leaving UFO, Michael Schenker returned to Scorpions to help work on the ‘Lovedrive’ album. Originally thought to only be on about 3 songs, Michael is on most of the album as he contributed backing vocals as well as lead guitar work on 5 songs. But he was not planning on touring with the band at least not until the band parted ways with Mathias Jabs. He joined in February 1979 at the beginning of the tour. However, it didn’t last long as by April, Michael left the Tour while they were in France. After what was said to be very intense negotiations, Mathias Jabs rejoined the band. Talk about drama!!