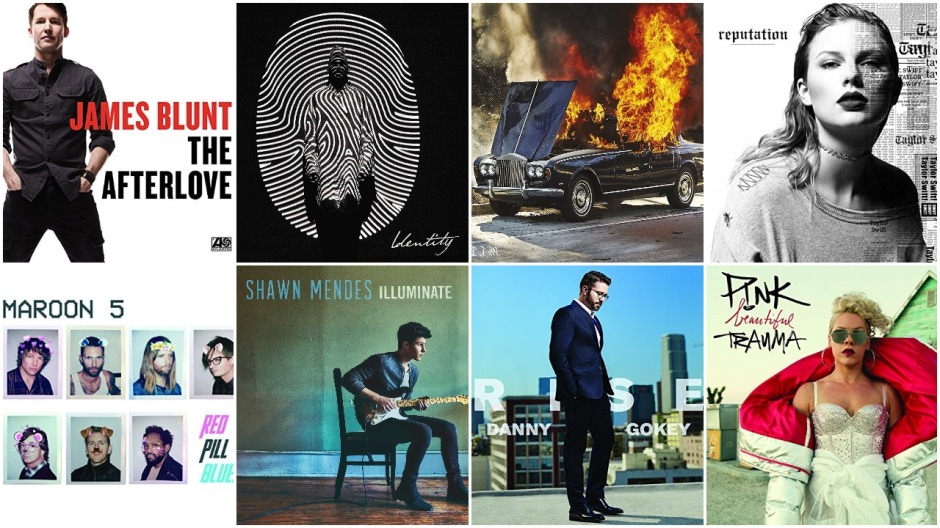 It is time for the Top 20 Songs of 2017.  My previous post, if you missed it, was the Top 20 Rock Songs of 2017.  Go check it out by clicking on the link.  These 20 songs are all genres other than rock.  Some were popular and chart toppers and others were not.  They are my favorites, that touched me in some way so don’t expect any indie bands or anything trendy.  If you want that go to one of the cool sites out there, this ain’t it.

#20 – “Something Just Like This” by the Chainsmokers featuring Coldplay off the album ‘Memories…Do Not Open’:  This song was a family favorite during the year.  The one song the wife liked as well as all the kids and as a result, I heard it a lot and it grew on me to where I stopped and listened to it when it came on the radio.  A catchy little song with a great beat.

#19 – “…Ready For It?” by Taylor Swift off the album ‘Reputation’:  This one is on the list because Taylor dominated the last 2 months with my kids and I heard this one a lot as well.  I actually liked it with its heavier, darker tone.  It was a great way to open the album.  She might catch a lot of abuse, but she is doing something right as she is the only out their actually selling physical albums.

#18 – “Only Angel” by Harry Styles off the album ‘Harry Styles’:  Harry’s album was full of songs that could make this list.  This is the one that stood out most for me barely beating out “Kiwi”.  I like how is leaning more towards rock than pop and you can hear all his influences in his music.  A very British sounding song with a hint of Stones and even Oasis…woohoo it is good.

#17 – “Witness” by Jordan Feliz off the album to be named later:  Jordan’s first single off his upcoming album in 2018 yet to be named.  He is a great songwriter and has crafted another pop filled song with catchy hooks and chorus all with a positive Christian message.  If this is signs of things to come, it should be great.

#16 – “Don’t Give Up” by Ryan Star:  This was a single Ryan released during the Summer, but no mention of a new album.  I suspect that will be the case sometime in 2018.  The piano ballad is filled with emotion and a positive message.  With all the suicides lately, it asks that you hang in there and don’t give up.

#15 – “Glorious” by Macklemore featuring Skylar Grey off the album ‘Gemini’:  The only hip hop song on the list and includes Skylar Grey who wound up on the Rock Song chart as well with Papa Roach.  There is something about Macklemore I like.  I don’t know if it is voice, his delivery or what, but I enjoy his songs.  This is another fun-filled song.

#14 – “The Cure” by Lady Gaga:  Lady Gaga single with no album mention yet, but I am sure it is coming.  She can do no wrong lately and this is another instant Gaga classic.  After the great Joanne, she has gone back to a more straight-up pop song and delivers another powerful vocal performance.  You can’t but bounce along to the beat and sing along.

#13 – “Second One to Know” by Chris Stapleton off the album “From A Room: Volume One”: My only country song on the list and it is really more southern rock which is why i like it.  He is not like the Bro-Country crap out there today.  He is a old school country with a taste of outlaw and some southern rock to boot.  The combination works for me.

#12 – “Run For Cover” by The Killers off the album ‘Wonderful Wonderful’:  “The Man” might be the more popular song from this album, but “Run for Cover is better in my book.  It is pure The Killers sound and Brandon’s vocals are unmistakable.   The fast-paced, upbeat song is so danceable and will keep you moving throughout.

#11 – “See You” by Thriving Ivory off the album to be named later:  Thriving Ivory is one of those bands you either love or hate all due to the uniqueness of Clayton Stroope’s voice.  Obviously, I am in the love category because I love everything they do even when they were Midnight Cinema.  This picks up right where they left off and more catchy pop songs and that voice just shines.

#10 – “Shape of You” by Ed Sheeran off the album ‘Divide’:  Naturally I would have a Ed song on the list.  He was everywhere and we did go see him in concert this year.  The first single off the album is still my favorite (or maybe that was “Castle on the Hill” which I think they came out the same day).  To see him play this song live and all the instruments by himself is something to be seen.  Talent!!

#9 – “Stronger Than We Think” by Danny Gokey off the album ‘Rise’:  You know I like a good, catchy song with a powerful Christian message and this one has it in spades.  This message could apply to everyone as we are all stronger than we think we are and knowing that we can accomplish so much more.  A very upbeat, danceable song on top of that makes it a surefire hit.

#8 – “Don’t Give Me Those Eyes” by James Blunt off the album ‘The Afterlove’:  I gained a new appreciation for this album when I saw James in concert opening up for Ed.  After the show, I devoured this album and really fell in love with these songs.  He makes a very depressing song (Lyrically) and turns into a masterpiece.  This piano driven song showcases that voice which is another one you either love or hate.  If you can get past knowing he is the voice behind “You’re Beautiful”, you will be in for a treat.

#7 – “Walk On Water” by Thirty Seconds to Mars off the album to be named later:  Jared Leto and gang are back and a new album to come in 2018.  The first song off the single is really accessible and very pop-oriented.  A definite radio hit.  The man can lose himself in his acting characters and the same goes with the character he plays as a lead singer of a band.  His vocals are the highlight here.

#6 – “What About Us” by P!nk off the album ‘Beautiful Trauma’:  When will P!nk ever not do a great song or a great album???  I don’t know if it is possible.  This powerful song is so inspirational and grabs hold of you and never lets go.  She has a way of creating songs that are so her (with help of course) if that makes sense.  Who would have thought that 17 years after her debut she would still be going strong and making relevant songs.

#5 – “Lips On You” by Maroon 5 off the album ‘Red Pill Blues’:  I am a little tired of Maroon 5 as Adam is everywhere, but this song from their new album is sensational.  It is probably the sexist song out this year and they would be remiss to not release this as a single.  If you want to get turned on, turn down the lights and turn this up.

#4 – “I Don’t Know Why” by Imagine Dragons off the album ‘Evolve’:  Everyone talks about how great “Thunder” is and it is, but it is too repetitive.  This song is more powerful to me and way better.  One helluva a beat and when the song gets going, you get moving.

#3 – “There’s Nothing Holdin’ Me Back” by Shawn Mendes off the album ‘Illuminate’:  Shawn is another family favorite and everyone likes to try and sing it as fast as he does to no avail.  The kid is talented and has great vocal chops.  The quick pace of the lyrics in that chorus just take this song over the top.  It is so damn catchy and fun.  No brainer of a hit.

#2 – “In My Veins” by Colton Dixon off the album ‘Identity’:  Well, the album is my #1 album of the year (that is not rock) and you know I had to have a song at or near the top.  “In My Veins” is such a powerful, christian song.  The song is borderline electronica, rock and comes blaring at you with such force and lyrically is so moving.  It doesn’t get much better than this (except for the #1 song below).  If you don’t know him, check this song and album out.

“Feel It Still” by Portugal, the Man off the album Woodstock:  I really dug this song.  It was so damn catchy and had a 60’s kind of vibe to it with the fun beat and John Gourley’s very high pitched vocals.  As it turns out, the song has borrowed heavily from the song “Please, Mr. Postman” by The Marvelettes which was released way back before my time in 1961.  It is the one song that got stuck in my head since the first day I heard it so that qualifies it as my favorite for the year.

The funny thing about this list for me is how many songs are from albums that are going to be released next year.  Considering this years didn’t have as many non-rock albums I got into, these singles were outstanding and make me really excited about what 2018 has in store.