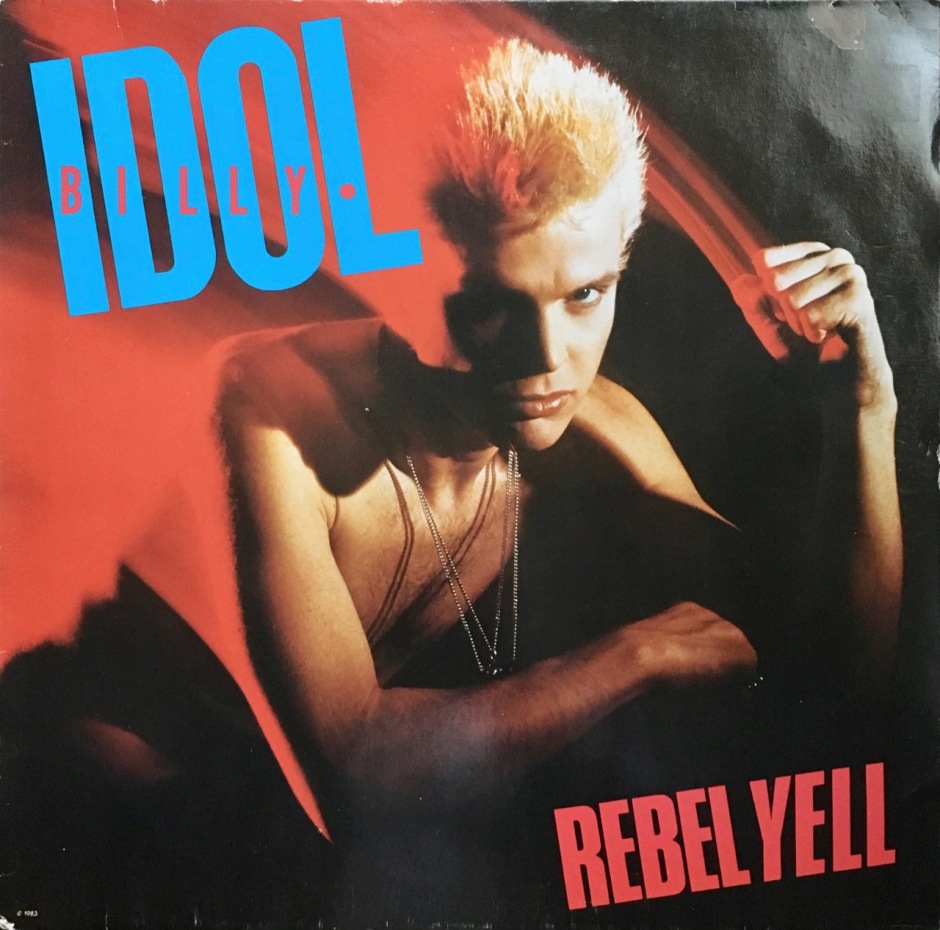 After the success of his self-titled debut album, Billy Idol, teamed back up with producer Keith Forsey and guitarist Steve Stevens.  And in late 1983, we were treated to his second album, ‘Rebel Yell’.  The collaboration with Steve Stevens grew immensely with this album.  On the first, Steve only had his hand in writing two songs.  On ‘Rebel Yell’, he contributed to all but one song that was only written by Idol.  The bond had grown so much, that Steve even made the back cover of the album.

The duo of Billy and Steve was complete and you couldn’t have one without the other, at least for a long while anyway.  If you notice on the back cover, the songs are broken out into Sides 3 and Sides 4.  This was because the debut was 1 and 2, so these naturally would be 3 and 4, he would do this at least one more time for the next studio album.  I liked the concept.

An interesting fact about my vinyl copy is that is a German pressing.  When you see the pictures of the vinyl stickers, a lot is in German.  I can’t remember where and when I picked this up, but I when I saw it said German Pressing, I grabbed it and cheap as well.  Cheap because this album was a multi-platinum selling album for Billy and catapulted him into the stratosphere of stardom.  There are tons of copies out there, not as many German pressings now that I have mine, but you should be able to grab a copy and you should grab a copy. 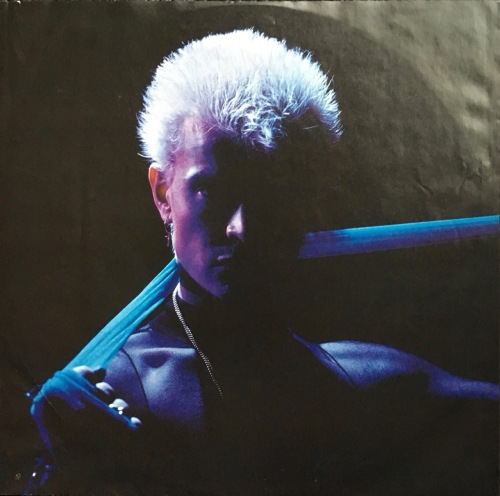 Musically, this album is a rock album that is heavily influenced by the new wave trend taking hold at the time.  During the recording of the album, Idol was in a constant battle with the label on creative control.  It got so bad, that Idol stole the master tapes from the studio and in the end, he was victorious and was given control of the album’s direction.  According to Mix Magazine, Forsey told Idol that he actually stole the wrong tapes, but luckily the label didn’t know that.

The opening track is the title song “Rebel Yell”.  It is a scorcher of a song, high energy and attitude.  The opening of the song is all done with the guitar even though it sounds like both a guitar and a keyboard.  Steve is showing off right out of the gate.  Vocally, Billy is on fire and you can see his lip curling up while he is signing which is amazing as it is on vinyl.  “Rebel Yell” was actually inspired by the Rolling Stones according to Billy on VH1 Storytellers.  Billy was at a party thrown by the Stones and everyone was drinking Rebel Yell Bourbon Whiskey.  I guess he loved that whiskey (along with a lot of drugs at the time).

“Daytime Drama” was up next and I was never a fan of this song, and today, that is still the case.  The song sounds really dated now.  There are some cool effects and guitar work throughout the song, but this song never grabbed hold of me.  The song didn’t have a good hook and that is probably why it was forgettable for me.

Thankfully, “Eyes Without A Face” was up next.  One of my favorite Idol songs.  The hand clap, the groove, the slow ballady feel all worked gloriously against a darker feel from the lyrics.  The song builds up in tempo and you get a fantastic little riff from Stevens and then some beautiful backing vocals by Billy’s girlfriend Perri Lister.  She is singing in french “Les yeux sans visage”  which means eyes with a face.  The phrase was also the title of a movie directed by Georges Franju which was the inspiration for the song.

With opening growl, you get “Blue Highway”, a catchy, uptempo song that really chugs along with lyrics I have no idea what the hell he is talking about.  The lyrics I am going to assume are heavily influenced by his drug use at the time.  Maybe it was a potential overdose the song is about, but not real sure.  Whatever the reason, a great rock song that is top notch in my book. 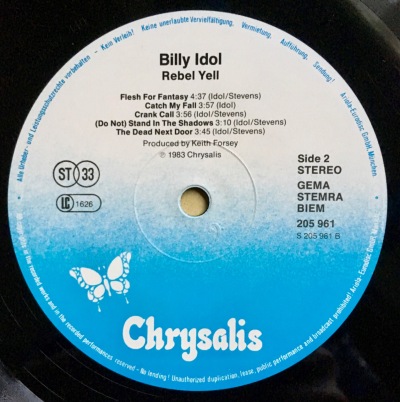 This side kicks off with another Idol classic, “Flesh for Fantasy”.  Hmmm, could this be about sex?  Yes, I think so.  It appears to be about going out and looking for love in all the wrong places and fulfilling any fantasy your little heart desires.  This song has a great bass line through out and is more new wave than rock and totally kicks ass.  Another of my favorite all time Idol/Stevens songs.

The only song Idol wrote by himself, “Catch My Fall” seems to be autobiographical about his struggles with drugs.  His struggles with the fame and the relief from the drugs, but asking for help if he should hit rock bottom, which he does down the road.  This is another heavy bass song with the opening riff and a lot of synths on this one as well.  More upbeat with a great hook and some saxophone thrown in for good measure.  Another great track.

“Crank Call” is one of those deep cuts that make you more than a fan.  It is a great rocker with some nice guitar work from Stevens and lots of Idol attitude.  Lyrically, I again don’t know what the hell he is talking about, but I don’t care.  I dig the song regardless.  Mainly for the heavy guitar on it.

Another great deep cut is “(Do Not) Stand in the Shadows”.  The song is a little repetitive, but it is full of energy and fast paced that it reels you in and you can’t help but sing along.  Probably the most fun song on the whole album and when you get the deep cuts to speak to you, you have a great album.

The final song is the most bizarre song on the album called “The Dead Next Door”.  It meanders along in this dark world that confuses me and bores me all at the same time.  After such a high energy song previously, to be pulled into this darkness really worked against me for this one. I missed what he was putting out on this one and don’t like it at all and I usually like darker toned songs.

The track score is 7 out of 9 tracks or 78%.  Only two I didn’t like and since there are only 9 tracks the score seems lower than you think it would.  However, the songs that I kept on here are so strong that the overall album score is 4.5 out of 5.0 Stars.  I love this album.  There are so many iconic, classic Billy Idol tracks on here that this is one of his best…but where it lands, we will have to wait and see.  The album brings New Wave and Rock together and captures that energy and magic in a way that few albums ever would. Billy Idol set himself apart from the other artists at the time and became a bonafide rock star and a huge Video star.   Just how long would he and Steve Stevens ride this success we will wait and see.

Up next will be Billy Idol’s ‘Whiplash Smile’.